You’ll be pleased to know that bleeding penises are valid excuses for speeding. Even if they’re not yours.

(There Jeff, I posted one of your stories. Happy now?) 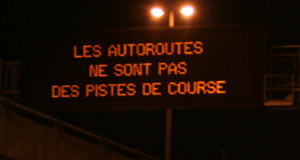 This sign appears on highway notice boards this week in anticipation of the Canadian Grand Prix Sunday on Ile Notre-Dame. It’s there because the F1 season awakes the armchair race-car driver in too many people who push their way-too-loud engines to the limit speeding recklessly down roads and putting people’s lives at risk. 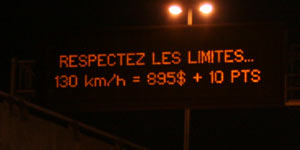 In case that doesn’t work, the second part of the message reminds drivers of how much they’ll have to pay if they’re caught speeding. 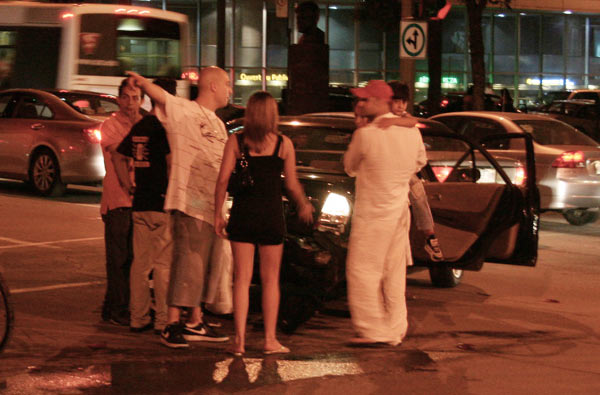 I was reminded of this tonight when, as I walked through the late-night F1 celebrations on Peel St. and McGill College Ave. and St. Catherine St., I came across a vehicle collision at the corner of de Maisonneuve Blvd. and Jeanne-Mance St.

Above is the result: A young family (with a small child) stand outside shocked (but unharmed) after their car was hit in the back and spun around. A bystander points west toward where the car that hit them had sped off. 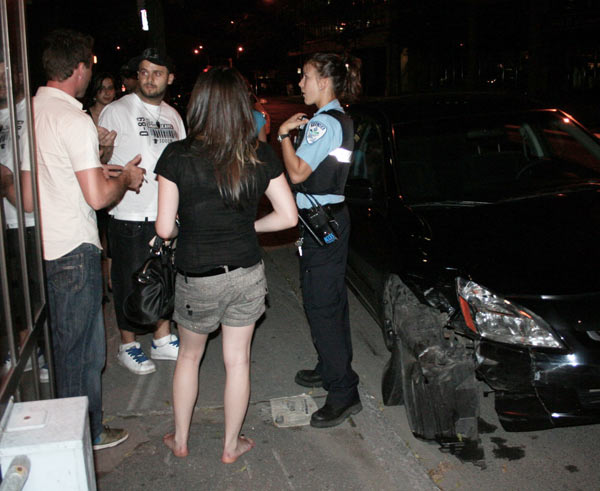 The other vehicle didn’t get far. After speeding away from the scene with a right front tire ripped to shreds, it pulled over two blocks away at the corner of City Councillors (total distance: about 1,000 ft or 300 metres). They were quickly joined by police, who asked some questions of the driver (in the far left of this photo, trying to explain to an outraged bystander how this wasn’t a hit-and-run). Shockingly, the driver turned out to be a man about 20 with his girlfriend (the one with the see-through shirt) in the passenger seat.

The driver, who denied having drunk any alcohol, said he drove the two blocks because he was looking for a place to park, not because he was trying to get away. 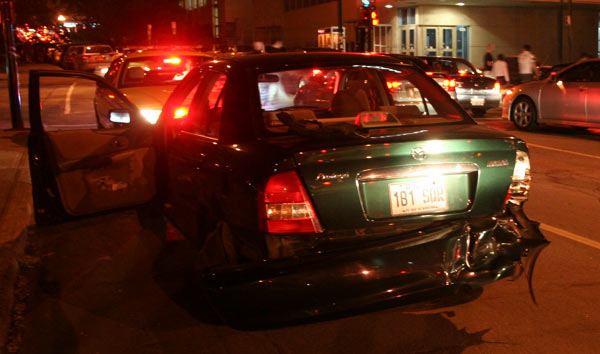 The damage could have been a lot worse. A bumper and turn signal is much easier to replace than a child.

As to whether this qualifies as a hit-and-run, or whether speeding and/or alcohol might have had something to do with this midnight crash, I’ll leave that judgment to you (and, possibly, the courts).

LCN has picked up the scent of findesamendes.com, a website that seeks to help drivers with speeding tickets by letting them know where radar traps are.

If that sounds familiar, it’s similar to a service being offered by SOS Ticket, which I wrote about in January. Both are perfectly legal, though the fact that they’re undermining police efforts, and they’re not all that effective in their task, do raise some eyebrows.

It’s also unclear how findesamendes.com plans to support itself financially if it’s not asking for any money from users.

But hey, anything to help reckless speeders.

S.O.S. Ticket, the service setup by former Montreal police officer Alfredo Munioz to help people defend traffic tickets, has launched a new service. For 50 cents per message, drivers can subscribe to a radar trap alert service, which will notify them by text message when and where police officers are checking people for speeding.

The service says they find this out through the use of “road agents” (spies) who look around for them and report them.

Aside from the inherent problems essentially keeping track of every police car in the city and every SQ vehicle on the highway, there are serious ethical implications as well. Defending people in court is one thing. Helping them to (essentially) avoid police while committing a road infraction seems a bit more serious.

Not to mention that it encourages people to speed.

So, some wonder, why do cars have speedometers that go up to 180kph? Why not just technologically limit how fast they can go and make it simpler for everyone?

Well nobody is doing that quite yet, but Quebec is taking a step in the direction of making automakers responsible for speeding. They’re considering banning all advertising that glorifies excessive speeding. Basically all that “professional driver on closed course” stuff, as well as shots of ski-doos flying through the air.

It’s clear that self-regulation isn’t effective here. Half of car ads feature unsafe driving, possibly in violation of the industry’s own rules about advertising. New Zealand started cracking down on these kinds of ads years ago, and Australia is running interference suggesting speeders have small penises.

To see an example of how bad it is, take a look at this Volkswagen commercial, which features speeding, unsafe driving, near-collisions and apparently drunk driving, with the moral of the story that the car’s safety systems will leave you without a scratch no matter how far you push the envelope.

UPDATE (Dec. 22): Of course, to say that such a law is a ridiculous overstepping of legislative authority, a gross attack on free speech and an outrageous violation of our rights by a nanny-state too concerned with wasting our money pretending we’re idiots would also be true.