I filled in once again for Master Bluffer Peter Cooney in this week’s Bluffer’s Guide as he was having a busy week. I wrote about GM’s closing of a plant in Oshawa, Ont., and what the Canadian Auto Workers union is doing about it.

Naturally, because I’m drunk with power, I included a near-non-sequitur about Stephen Colbert:

But what about Stephen Colbert? True, the city did name March 20, 2007 “Stephen Colbert Day” after the mayor lost a bet with the TV satirist over a game between the Oshawa Generals and Colbert’s favourite Saginaw (Mich.) Spirit, who named their mascot after Colbert. This came after Colbert encouraged Spirit fans to throw copies of GM’s earnings reports onto the ice during a game, a gesture that would perhaps seem not so tongue-in-cheek now.

This is a joke, right? Colbert’s just going to ad-lib his whole show?

I can understand Leno and Letterman putting on a bare-bones show without monologues in order to save the jobs of non-writing tradespeople who work for them. But Stewart and Colbert are all about the writers. What the heck are they going to do?

For the first time in 30 years, the Canadian dollar closed above the U.S. dollar in trading today.

Yeah, that’s more about the U.S. dollar being in freefall, but it gives me an excuse to re-post my graphic: 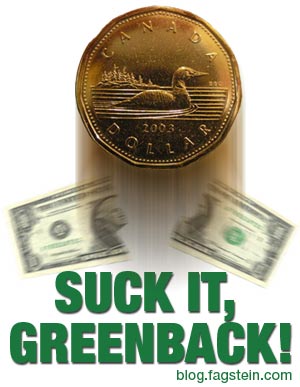 For the weekend at least, Canadians can cross the border into the U.S. and demand “real money” instead of their silly green-coloured paper.

A Globe story about the dollar’s surge curiously linked to a Stephen Colbert video ranting about the dollar. I wanted to watch it, but the Globe’s video player “cannot be played on a Macintosh.” What is this, 1998?

For those interested, Comedy Central has the video (legally) online.

I have to go after the latter. He’s inviting people to edit an interview with him, much like he does on Better Know a District. Watch the video where he intentionally makes it easy. I can’t wait to watch the edits.