Tamy Emma Pepin certainly seems to have had a pretty successful career in the media. A contributor to TQS, the Journal de Montréal, and TVA as a freelancer. An editor for Huffington Post Québec. A social media ambassador for Tourism Montreal.

More recently, she was a contributor to Cap sur l’été on Radio-Canada, and she was one of the hosts of local lifestyle series Only in Montreal. That series, sadly, has not been renewed, but she quickly moved on to her next project: a travel series produced by Toxa (the company behind Urbania) and airing on Évasion.

The 13-episode one-hour series, Tamy @ Royaume-Uni, was shot last fall, and debuts Thursday at 8pm. So I had a chat with Pepin and another with producer Raphaëlle Huysmans about the show for a story that appears in Thursday’s Gazette.

It’s a French channel, and voiceovers and explanations to the camera happen in French, but because this is Britain, most of the stuff that happens is in English (which is thankfully subtitled rather than dubbed). Rather than sounding like an instructional video or sales pitch, the series takes a more documentary-style approach, following Pepin around as she plays tourist.

END_OF_DOCUMENT_TOKEN_TO_BE_REPLACED 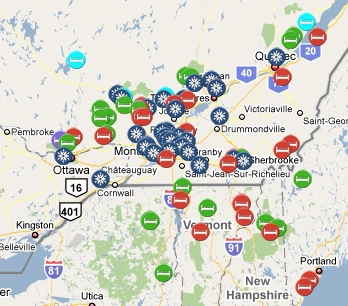 In a sign that dinosaur media are starting to truly explore the power of semantic data, my employer The Gazette has put together a Google Map of regional getaways, those small-town country inns that people drive to for a weekend, based off its Short Hops and Country Roads travel series.

They’re colour-coded by type, include basic contact information and a photo, and most importantly a link to a Gazette review, which would drive targetted traffic to the website if it’s used by lots of people.

The map took weeks to put together (not full-time, mind you), and has a bit under 100 locations on it, from Ottawa to Quebec City and from the Laurentians to lower Maine.

As with any Google Map, you can download the KML file and use it in Google Earth or any other mapping program of your choice, or mash it up however you like.