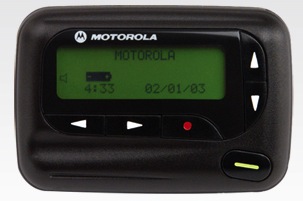 In our office, there are a few relics of the pre-Internet era, including pagers similar to the one pictured here. They’re called TUMs, which stand for téléavertisseur d’urgence médiatique. The idea is actually pretty smart, if antiquated: Quebec media are assigned these devices, and all emergency services, whether SQ or local police or fire departments or Transport Quebec or transit agencies, can send short messages about emergency events to everyone at the same time. The messages, written in all-caps, will alert the media to a breaking story, say where it’s happening and give a phone number to call for more information. They even have codes, “rouge” for deaths or life-threatening events, “jaune” for major events that are not life-threatening, and “vert” for information that usually doesn’t relate to an emergency. (You can find the full instructions on its use here)

As the Internet has taken on a larger role, the system has shown its age, and emergency services don’t seem to use it very reliably. So reporters call them up anyway at regular intervals to ask what’s up.

Recently, the group behind this system started emailing those alerts out to journalists using a distribution list. (They’re also on Twitter.) The messages are identical (even still being in all-caps), but email is more reliable, because you don’t forget where you put your email or realize three days later that its battery is dead.

At 1:22pm on Wednesday, an alert went out that said this:

This alerts journalists that a suspicious package found at the MUHC construction site was, in fact, a false alarm.

Two minutes later, journalist Maxime Deland of QMI did a reply-all to the message, apparently accidentally, saying “Je m’occupe de la mise à jour du txt.” Clearly a message that was supposed to be internal to QMI. Except, because it was replied to both the sending address and the receiving one, it went through the distribution list. Which is fine because that list is only one email address.

Normally, a distribution list like this would have protections so that only authorized messages would be sent out. A list run by emergency services that goes out to journalists you’d think would be very concerned about such security. But apparently this one allows any email (or any email from a list member) to be sent through the list to everyone else on it.

Annoying as hell for a bunch of journalists, but for most it gives them something to talk to each other about around the water cooler. (Do they still have water coolers?)