This week in St. Henri there was a public consultation meeting for the Ministry of Transport’s Turcot project, which will see the Turcot Interchange (Highways 15, 20 and 720) reconstructed primarily at ground-level (saving money for maintenance, clearing some views and helping easing tensions of driving through an intersection built on decaying stilts).

The project would also see reconstruction of Highway 15/20 through Ville Emard (which would be lowered significantly now that giant ships aren’t passing through the Lachine Canal anymore), and more interestingly Highway 20 through Turcot Yards, which would be moved next to the Falaise St-Jacques along with new train tracks: 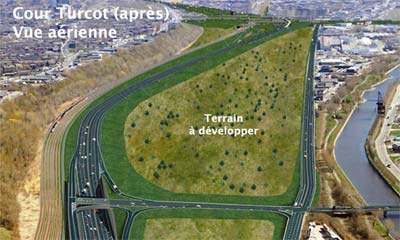 This would free up a giant lot to be developed (though nobody’s come up with a good idea of what to do on it).

Though the MTQ has been holding consultation meetings, there are organized protests against the project, most notably from the Village des Tanneries, a small neighbourhood in western St. Henri whose residents are afraid their homes will be expropriated by the government and they’ll be stuck without fair value for them.

But when it comes down to it, the benefits far outweigh the drawbacks. A giant space will be made available and nobody will have to cross a highway to get there. The highway will have a natural barrier on one side, eliminating the need to make those ugly artificial sound walls on that side. And it’ll be much cheaper and easier to maintain the highest-trafficked highway interchange in Quebec.

It should be an extremely popular project. Unfortunately, citizens are getting short-changed at public meetings. This is entirely the boroughs’ faults. They’re saying it’s the MTQ’s problem and cutting off debate at council meetings, without mentioning that the MTQ is coming to the boroughs to take the pulse of citizens’ issues.

Let’s not let bureaucracy get in the way of progress, shall we? Let’s work together to make this work and see the creation of a new neighbourhood when this is all done… in 2015. Maybe.