The City of Montreal has decided to spend $700,000 to study the feasibility of an urban boulevard on the area reserved for the Highway 440 extension in western Pierrefonds. They’ve already decided, though, that this won’t include a bridge to Ile Marois Bizard.

Hopefully the study will find a way to justify a project that won’t help anyone get to work any faster.

The blogosphere is buzzing (do two posts constitute a buzz?) about the Pauline Marois camp sending a lawyer’s letter to The Gazette (inaccurately described as a “lawsuit”) demanding they retract allegedly incriminating statements about her made in an article by William Marsden this weekend.

The article is long and deals mostly with efforts to get areas of land rezoned from agricultural to residential (not too difficult when your party is in power — but if you can get through this part without lapsing into a coma, give yourself a cookie). These changes were made before Marois and her husband bought the land, but were supposedly done on their behalf. The really incriminating stuff — bribes in exchange for lies to get through loopholes — are based primarily on the statements of a retired construction worker who says he took $1,600 $500 in cash (see update below) after signing an affidavit about his use of an old cottage.

The other interesting part is the allegation that part of the estate (but no fixed structures besides a gate) are built on government-owned land (specifically, land reserved for the construction of the 440 highway extension, which would certainly have a negative impact on property values should it ever come). I’ve used the Google Maps aerial view of the property to draw a picture here based on details from the article: 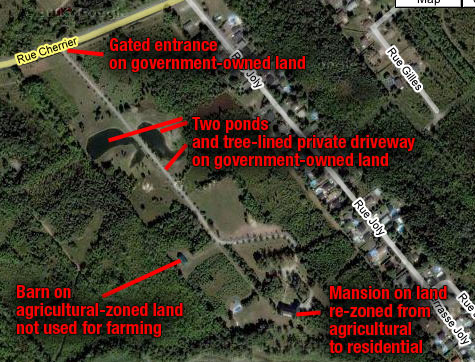 As you can see, the “built on government land” part is basically just a driveway, a couple of ponds and a gated entrance. And while I don’t mean to lessen the political implications of taking government-owned land for personal use (and because it doesn’t belong to you, not paying any taxes on it), I’ve seen many examples of homeowners using adjacent undeveloped land to walk their dogs, plant gardens or otherwise informally expand their backyards. (Though none would be so bold as to build a gated entrance to it.)

As for The Gazette, they’re not exactly sweating bullets. Marsden’s story seems very well researched, and the paper is standing by its reporter. And since Marois’s lawyer won’t comment on what he says they got wrong (seriously folks, why announce to the media that you’re taking legal action and then immediately refuse to comment on it?), I’m guessing this is more to save face than it is to right any real factual errors.

UPDATE (Sept. 25): The Gazette repeats its story from yesterday saying Marois’s husband Claude Blanchet sent a lawyer’s letter and is threatening to sue. (They’re milking this story for all it’s worth — as well they should.) The article creates one small hole in the original story: The neighbour now says it was actually $500 instead of $1,600 and that Marsden misunderstood him.

Meanwhile, Cent Papiers wonders why TVA is giving The Gazette lessons in journalism as shown in this LCN video (in which Marsden speaks funny-sounding French and is grilled over whether or not this is a “real story”). The funny thing is that this wasn’t such a huge story until Blanchet made it one. His threats to sue is what got every media outlet in town focused on the story.

UPDATE (Sept. 27): Marsden updates his story with news that Marcel Turcotte, the neighbour whose affidavit is at the centre of this controversy, has issued another affidavit reaffirming his previous one, and contradicting what he told Marsden. It also mentions there was a 5-year lease from the government (1994-1999) for use of the public land. (The paper made it clear in the original article it couldn’t determine if such a lease exists.) Managing Editor Raymond Brassard is still standing by his reporter.

Meanwhile, Marois holds a press conference at her Ile Bizard home and vows to follow through with her threat to sue the paper. She takes issue with the suggestions of impropriety, though not with any of the facts of the piece, except for the previously-corrected figure of $500 instead of $1,600 (which she insists was a gift in exchange for the work he went through on their behalf, and not a bribe or pre-negotiated compensation for signing the affidavit). She plans to donate any money she gets to help promote sovereignty (because The Gazette is deliberately targetting sovereignist leaders, she says).

UPDATE (Sept. 28): The 5-year lease was cancelled in 1996, according to Marois, because of snowmobilers using the land. She also says they got permission to install the gate and gate posts at the street entrance.

Marois’s lawsuit has been filed and asks for $2 million.

And this funny letter in the Gazette today, defending Marois against the paper’s “cheap shot”: “If the English are smearing her, she must be very good.” The writer vows to vote for Marois next time around, which I’m sure will come as sad news to anglo rights groups who were counting on his support.

Suburban mayors are going crazy over suggested solutions to the 440 West Island problem. Come, gather ’round the fireplace as I explain it to you. 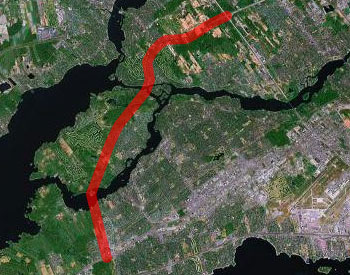 Many moons ago, the Quebec Transport Department figured out that expropriating land from homeowners to build highways was a very expensive and time-consuming process. To help solve it, they asked themselves: Wouldn’t it be a good idea to “buy” the land now for a highway development later?

Enter the 440. Expecting to eventually link this East-West Laval highway to Highway 40 in Kirkland, the government planned a route for it and reserved the land so nobody would build anything there. At the time, of course, the entire area was undeveloped forest and farmland. Now, with development all around the proposed route in both Laval and the West Island, it’s easy to see on a satellite picture where the highway is going to go: on the winding strip of green between those houses.

Hoping to alleviate the West Island’s rush-hour traffic problem, Pierrefonds wants to build an “urban boulevard” on the Montreal Island part of the link, between Gouin Blvd. and Highway 40. It would, Pierrefonds mayor Monique Worth says, alleviate traffic on the main north-south axes: St. Charles Blvd., St. John’s Blvd. and Sources Blvd. 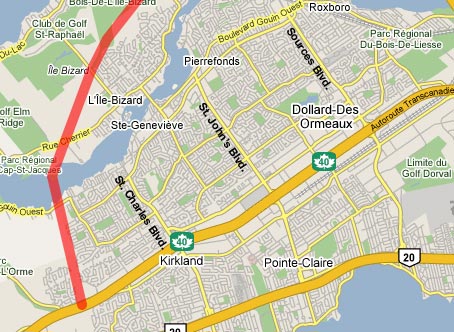 OK, I get St. Charles. But Sources? By what stretch of the imagination is some route that takes Sources now going to benefit by this new road 10 km west?

Anyway, Worth cut in to her own argument in a CTV News interview today when she admitted the obvious: That rush-hour travellers to downtown would “still hit traffic on the 40”. The other obviousness is that almost all of the northern West Island is east of this proposed boulevard, meaning they won’t use it to get downtown.

The idea isn’t necessarily bad. It will help alleviate traffic on St. Charles which heads between the northern West Island and western off-island areas. But it’s not going to help one bit with the Great West Island Trek Downtown, whose biggest traffic problem is the Decarie Circle (and Highway 20/Highway 13 merge).

As for Highway 440, the link would have some advantages, the biggest one being a fixed link between Ile Bizard and Laval. Currently, though there are three ferries, there is no fixed link from Highway 40 to the north shore between Highway 13 and Hawkesbury, Ontario. That makes some significant detours.

But the proposed link also runs right through Ile Bizard’s nature park. And cutting down all those trees to build a highway is not only unpretty, it kind of goes against the whole “environment” thing.

Let’s start with small steps, the first being a fixed link between Ile Bizard and Laval. When the roads along that route start overflowing with traffic, then we can talk about building a highway.

Until then, keep the right-of-way reserved for now. Maybe have a dirt path for people to bike through. It’s trees, and they’re good, mmm’kay.