Guy Bertrand, the lovable lawyer and rabble-rouser, has finally shown his face in front of The Commission, and shown what a hero he is by clearing up once and for all what the greatest threat is to the French language and Québécois culture: 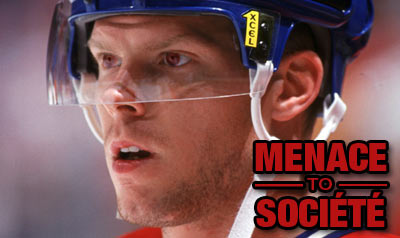 You see, because the Finnish player who happens to be the captain of the Montreal Canadiens has trouble with his third language, he’s violating our rights by not allowing hockey fans to be served in French.

When Koivu is inevitably found guilty in a court of law for crimes against humanity, should we subject him to lethal injection, the electric chair or just force him to be a panelist on Tout le monde en parle?

UPDATE (Nov. 1): Gazette letter-writers come to their captain’s defence and let Bertrand have it. La Presse’s André Pratte points out that anglophones, not francophones, are in linguistic danger in Quebec, and François Gagnon has some good insight into the matter.