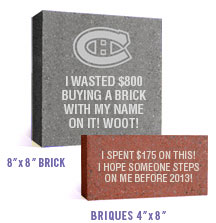 The Montreal Canadiens, preparing to celebrate their 100th birthday, are redeveloping an area outside the Bell Centre, calling it “Centennial Plaza,” adding some statues and selling bricks.

The bricks, a seemingly a propos metaphor for the team currently (overpriced dead weight that people step on, defined only by the stubbornly unending support by Montreal hockey fans), are being sold at between $175 and $800 apiece (depending on size and location) to raise money for … uhh … the Montreal Canadiens. (With “a portion of the proceeds” going to the Canadiens Alumni Association.)

Some might call it a transparent money grab, but the hard-core fans will eat it up. After all, it’s a chance to be a part of Canadiens history and have your name be forever etched on a brick that you own, on the walkway to the greatest hockey arena in the world.
Provided, of course, your definition of “you own” is “remains the sole property of the Club de hockey Canadien, Inc.” and your definition of “forever” doesn’t last longer than five years.

The terms and conditions of the sale provide you no right to ownership, gives complete veto power to the club over the text you use, makes absolutely no guarantee to keep the plaza beyond 2013, and for that matter doesn’t even guarantee you that they’ll build it where they say they will.

I also note that the website is entirely silent about any obligation to maintain your brick, even for those five years. So if someone sticks gum in it, or scratches it, or takes a jackhammer to it, it’s entirely unclear who will pay the bill to have it replaced.

But hey, who am I to stand between them and your money?