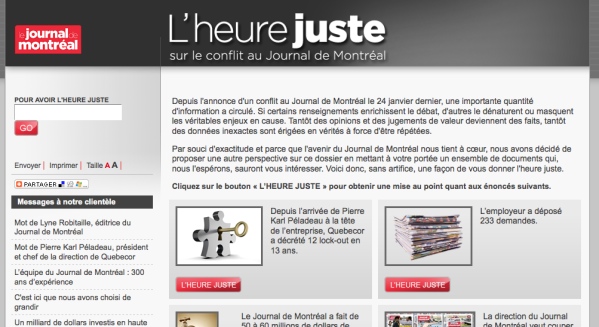 Quebecor, tired of the “misinformation” being put out by the union representing locked-out Journal de Montréal workers, has responded with a website of its own at www.lheurejuste.ca. It features management responses to union talking points, though nothing we haven’t heard in the media and in articles in the Journal over the past week.

It also has PDF copies of those two-page spreads from the employer repeatedly re-explaining its position (one of the links is broken – the rest are giant images rather than properly-created PDFs). And you can download copies of ads saying how great Quebecor Media is at creating jobs, complete with stock photos of happy employees.

It’s kind of hard for Quebecor to play the victim here since they started the lockout without even making a contract offer. Their reverse-talking points are also less than convincing (they won’t say how much the Journal makes, though they admit that it’s still profitable).

Last night was the big night with Richard Martineau and union boss Raynald Leblanc on Tout le monde en parle. There are plenty of summaries, analyses and just plain ranting of what happened:

Sadly, Radio-Canada still doesn’t put TLMEP online, so if you were busy watching the Super Bowl, you’re out of luck.

UPDATE: Therrien points out that TVA’s Le Banquier (which had Quebecor boss Pierre-Karl Péladeau on board in what I can only assume is a funny coincidence) had better ratings than TLMEP.

And in other news…