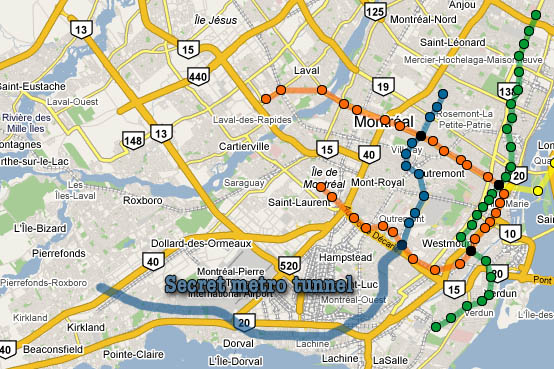 Path of secret metro tunnel, according to declassified STM archives

Two months ago, a group of local underground sewer explorers stumbled onto an interesting find: a large tunnel that seemed to go on forever but didn’t have any obvious purpose. After some investigation and searching through archives of the government and the local transit authority, a clearer picture is finally starting to emerge: that tunnel was part of a secret metro extension from Snowdon to the West Island that has been hidden from the public for mostly political reasons.

The tunnel’s history is actually quite extensive, and predates the metro itself. Most of it used to be two small rivers that connected to Lake St. Louis. The rivers were replaced by larger than normal sewers some time before 1890. Around WWII, most of those sewers were turned into trench roadways and tunnels to be used for transportation, but without proper ventilation the long stretches of tunnel would quickly accumulate carbon monoxide. After a truck driver died in the tunnel somewhere under Lachine from asphyxiation, and another worker died in a cave-in, the tunnel was permanently sealed off.

It’s not clear what happened over the ensuing decades, but the tunnel was to be used as part of a planned metro extension of the blue line from Snowdon to the West Island. The only problem was, nobody could find the tunnel.

It was incredibly embarrassing for the government, but all records relating to the long tunnel were lost in a fire in 1951. All the known access points had been built over, and no one could come up with a way to get access to the tunnel, much less bring in equipment safely to build a metro system inside.

During the 1970s workers discovered an access point near the Decarie trench at Queen Mary, just west of what would become the Snowdon metro station. (In fact, Snowdon was built in part through this access, saving the government millions of dollars in construction costs.) Weeks were spent exploring the tunnels and redrawing their maps. Retrofitting the largest and longest tunnel to accommodate a metro system wouldn’t have been cheap, they discovered, but would certainly have cost less than starting from scratch, and probably less than a bus system. It also had the advantage of passing close to the airport terminal.

That’s where politics comes in. The 70s were a rather volatile time in Quebec, especially with the 1976 election of the Parti Québécois. According to recently released documents, the PQ minister of transport did his best to stop the plan in its tracks. The tunnel’s route takes it through Hampstead, Montreal West, Dorval and Pointe-Claire. It couldn’t be more anglo-friendly if it tried. And party hardliners would blow a gasket over the idea of spending millions of dollars providing high-speed transit for anglo suburbanites, especially before much-needed service to St. Leonard, St. Laurent and Verdun (not to mention the Université de Montréal).

Citing vaguely-described security concerns, the minister of transport classified all records relating to this tunnel for 30 years in 1978. The government had actually forgotten about it until a large part of the tunnel was recently rediscovered through an abandoned sewer. Inquiries to the province about it prompted the full release of the file (or at least, what’s left of it). It should be up on the government’s website soon, and I’ll link to it when it is.

Additional searching through the STM’s archives as well as what’s left of the city’s gives us a clearer picture of what the tunnel looks like. But nobody is sure if that’s even all of it. There may be other tunnels that have been sealed off for decades and nobody knows where they are.

For now, based on information provided to me through paper files I have, I’ve constructed a map of what the tunnel we do know about looks like. Much of it is in a state of advanced decay, and some sections aren’t connected with each other, but you get an idea of roughly where the tunnel goes.

Though the truth is out now, and the government is more open to suburban metro extensions, the tunnels are even less suitable for metro construction than they were 40 years ago. A back-of-the-envelope estimate by one engineer put the cost at over $9 billion, or about 10 times what it cost to extend the metro to Laval. In fact, some tunnels would have to be destroyed first, meaning the work would have to start from scratch.

That’s a shame. It could have been so easy.

UPDATE: I just noticed this post at Spacing Montreal which describes an underground sewer which runs through Lachine and the southwest that’s large enough for a metro car to travel through. I’ll just pretend like it was all part of my master plan.