UPDATE: L’Autre St-Jean seems to have changed its mind again. See below. 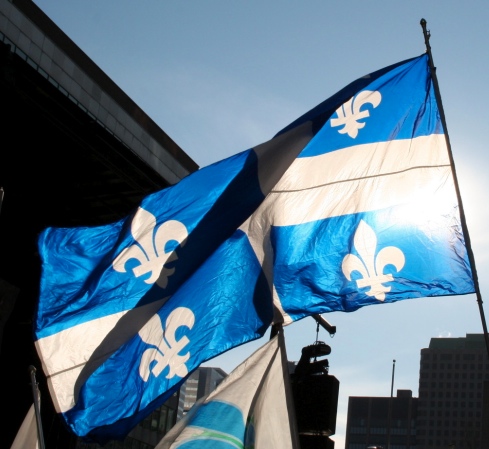 As an anglophone Quebecer, it always annoys me when people confuse “Québécois” with “French-Canadian”. Not all Quebecers are francophone, and not all francophones in Canada live in Quebec.

It’s not just the Rest of Canada that does this, it’s also many of the Québécois themselves. Us anglos are really better off living in Toronto, where we belong. And French-speaking Canadians outside Quebec are ignored because they won’t be part of the new sovereign country anyway.

Thankfully, these views aren’t shared by the majority. Which is why I’m heartened at the near-universal outrage in the comments section of an article by La Presse’s Martin Croteau about two anglophone bands being banned from Fête Nationale celebrations on June 23. (The fact that hell is being raised by francophone publications (see also Voir, Bang Bang, Josée Legault) instead of just The Gazette, CJAD, CTV or The Suburban is also nice. Those outlets would be quickly dismissed for bringing up stories like this first.) There’s even a petition going around to bring them back (with requisite Facebook group).

It seems that the Autre St-Jean organizers were getting pressure from Fête Nationale directors (read: SSJB) and others to remove Bloodshot Bill and Lake of Stew from their event, even to the point where protests were threatened if they were allowed to go on. Though both are Quebec bands, their songs are in English, and that’s just not right, they argue. Fête Nationale is about celebrating a French Quebec.

This, of course, comes mere days after celebrating the fact that they were including anglophone bands and being more inclusive.

UPDATE (June 15): A short, bilingual message posted on the event’s website says they are “maintaining” their list of invitees, including the two anglo bands:

Montreal, June 15th 2009 – As the producer of L’AUTRE ST-JEAN, we, C4 productions, have been mandated by l’association Louis-Hébert to create an alternative musical event to celebrate our National Holiday.  In that sens, we maintain our choices for the line up of the event with Malajube, Vincent Vallières, Les Dales Hawerchuk, Marie-Pierre Arthur, Lake of Stew et Bloodshot Bill which represents forty minutes of anglophone music on a six hour show.

We wish that the event on June 23rd at Park ‘du Pélican’, which is, in our opinion, in the image of Québec and Montreal in 2009, will be peaceful.

More info will be communicated wednesday.

Whether or not they’ll actually get to play, I think back to the basic question: What is the Fête Nationale supposed to be about anyway? Is it about language, culture, or about the province of Quebec?

If Wikipedia is to be believed, the Fête Saint-Jean-Baptiste was about language and culture before the Quebec government got its greedy little paws on it. It was about French culture, and by that logic you might consider having only francophone bands perform at such an event.

But the Quebec government turned it into the civic Fête nationale holiday, wrapping it in the fleur de lys, blocking off non-Quebec francophones and making it to Quebec what Canada Day is to Canada.

Perhaps it’s because of their proximity on the calendar, combined with the political Quebec-vs-Canada divide that’s overwhelmed our politics over the past half century that people see an equivalence. Patrick Lagacé suggests if we turned this around – francophones being banned from Canada Day celebrations because of threats of protests from Albertans who want it to be English-only – that the outrage would be much higher.

If we accept that le 24 juin is a civic holiday about celebrating the state, then the comparison has some credence. The only catch is that Quebec wants to be unilingual while Canada does not.

But if it’s about culture, then a more apt comparison would be with St. Patrick’s Day in Quebec (indeed, the holiday has its genesis from those who wanted a celebration of the Québécois on June 24 like that of the Irish on March 17). And anyone who’s been to a St. Paddy’s parade in this town knows they’re very liberal when it comes to who can call themselves Irish. It’s not just Scottish pipe bands that slip by. Ukrainians, Israelis, Chinese are all welcome. Just put a shamrock sticker on your cheek and some green in your beer and you’re accepted into the club. So even then, anglophones (and any other language) should be welcome.

Provincial civic holiday, or francophone cultural celebration? Which is it? And which should it be?