As the city does work on Metcalfe St. that forces the 515 bus into a detour at its western terminus, the STM decided that they’d take another crack at solving the confusion problem that hits people (locals and tourists alike) when they want to take this bus: because it’s a circular route, there’s no East, no West, and no terminus. Both directions will bring you where you want to go eventually. 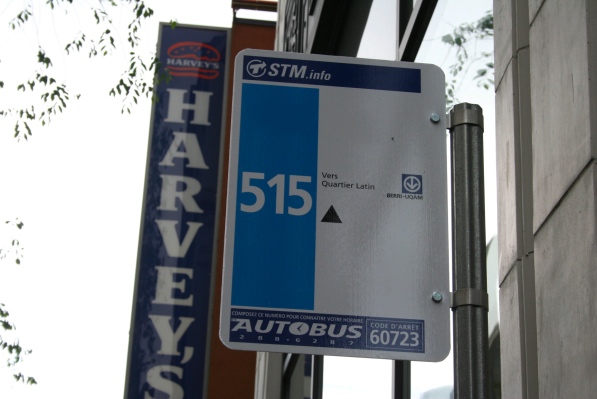 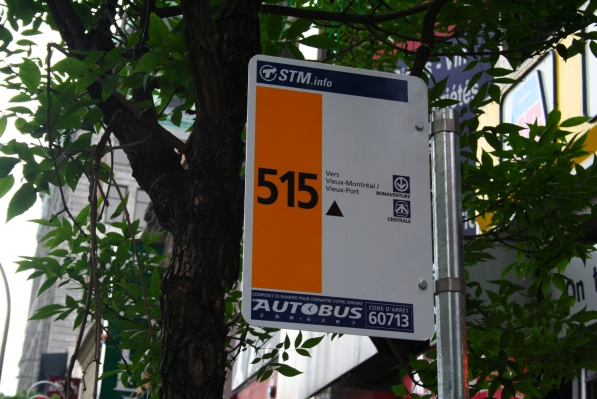 Isn’t it obvious? The blue sign is for the bus that takes the clockwide route, toward Berri and then down to Old Montreal. The yellow sign is for the counter-clockwise route that goes through Old Montreal and then up to Berri. This is consistent with the schedules which have a yellow route and a blue route on them, unless they’re copied in black and white, in which case they only have one direction visible.

So now not only has the STM invented a new colour for the 515 (recycled from a failed experiment), they’ve invented another one too! A light blue that’s just different enough from the standard dark blue to be both confusingly similar and confusingly different.

Of course, this won’t solve the confusion inherent in the route’s design, and will just create more. This is the first time the STM is using colours on stop signs to indicate direction, and it’s a break from the standard. If transit users need anything, it’s a standard framework from which to understand how things run. This idea laughs in the face of that.

The STM should do as I suggested and drop the part of the route between Berri and Peel, which is redundant to not one but two metro lines (and the 150 and 15 buses) and therefore the least-used part of a little-used line. Then they can have proper East/West designations and the confusion will be gone. 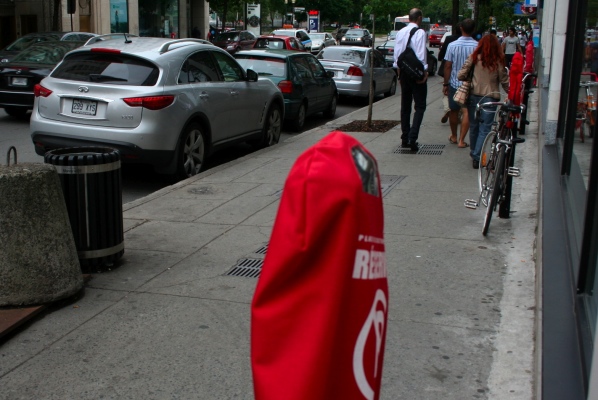 Of course, what’s really going to piss people off is that in order to fit these two stops, the city had to remove 10 parking spaces along Peel (not that the bright red bags with no parking signs on them stopped drivers from parking there anyway, as you can see).