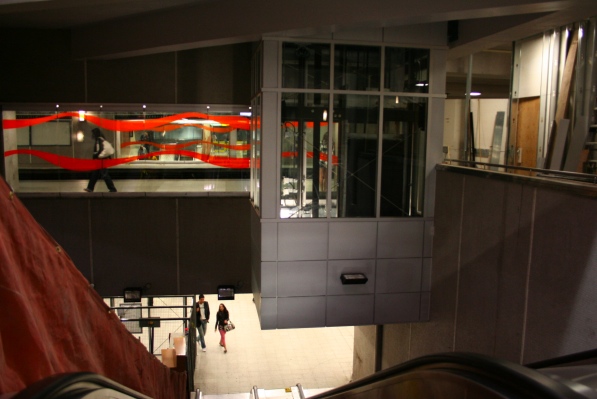 An elevator at Berri-UQAM sits just above a recently reopened escalator.

The STM has asked the media to assemble at the Lionel-Groulx metro station on Monday morning to mark the inauguration of elevators there and at Berri-UQAM.

The elevators, whose construction began more than a year ago, are the first to be put in service on the island, and will join the three stations in Laval as the only ones so equipped. Elevators at Bonaventure, Côte Vertu and Henri-Bourassa are also under construction. 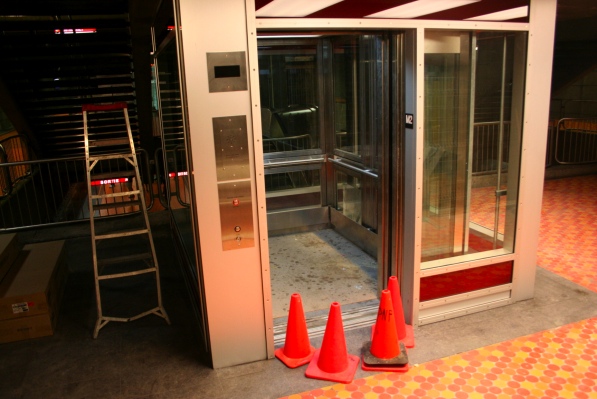 Elevator at Lionel-Groulx, ready for service

One thing that should be noted is that the elevators are for service on the orange line only. The elevators at Berri go only between the mezzanine (turnstile) level and the orange line platforms. They don’t descend to the green or yellow lines. The Lionel-Groulx elevators service both lines (the platforms are shared), meaning it’s the only green-line station with elevator access.

In my observance of these new elevators, I noticed something about their operation that I’m willing to bet will cause early headaches for metro employees:

This is the button panel next to the doors at one of the elevators at Lionel-Groulx. The panel is the same at all elevator entrances. At first glance, you might think it follows the standard layout: the top button to go up, the bottom button to go down.

Except when you look closely, you notice that the top button is actually an emergency call button. Only the bottom button calls the elevator (all the elevators installed so far have only two stops, and hence only need one button).

How many people do you want to bet will accidentally push the top button, causing all sorts of regular annoyance on the part of whatever metro employee has to respond to it, before some workaround or additional signage is put in place?