Like similar papers throughout the province, these are free papers heavily supported by advertising. Echo de Laval will be distributed to 120,000 homes in Laval, while the Echo de la Rive-Nord goes to 66,000 homes in Saint-Janvier, Sainte-Thérèse, Blainville, Rosemère, Boisbriand, Sainte-Anne-des-Plaines, Bois-des-Filion and Lorraine (in other words, the middle north shore).

The papers’ launch is significant for a few reasons:

Quebecor’s press release says that “selon le nouveau modèle d’affaires de Quebecor Media, journalistes et équipes de ventes travailleront de pair au sein des deux publications.” Some have interpreted this to mean that the wall between editorial and advertising would come down at the two papers, with both sides working together. Cécile Gladel and the STIJM are already calling foul.

Michaud, who is the big boss of Quebecor’s community weeklies, says this isn’t the case:

In other words, the papers will work together on news-gathering and advertising sales, but there won’t be advertorials or special journalistic treatment for advertisers. The advertising-editorial wall remains in place. (He made a similar statement to Le Trente when asked about it.)

UPDATE (Feb. 25): The issues are out, each with half-page ads featuring their journalists: 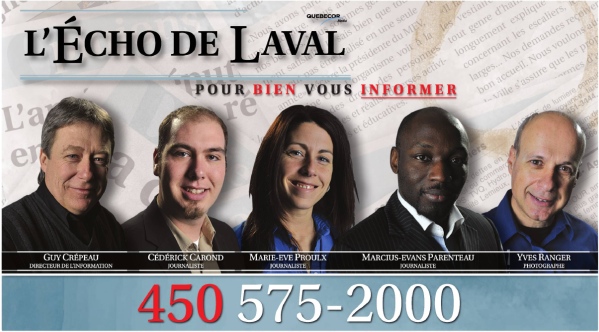 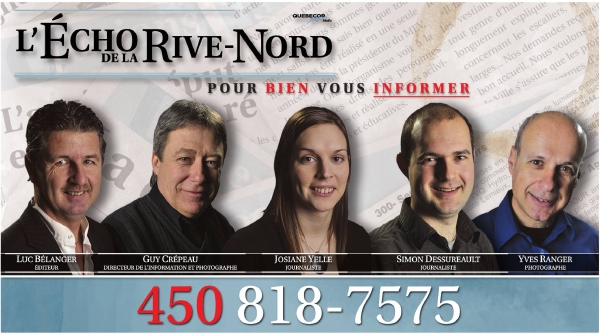 Both newspapers have pages with the faces of their advertising salespeople up top and pictures and blurbs on business announcements. (Echo de Laval, Echo de la Rive-Nord). I’m still waiting on a response from Michaud about what the purpose of these pages is.

UPDATE (March 13): Le Trente also takes issue with a piece defending a tanning salon whose only source is the owner of that tanning salon – who also has an ad in that paper.