The STM will be introducing three new routes and extending a fourth during its quarterly schedule change (links go to Planibus PDFs): 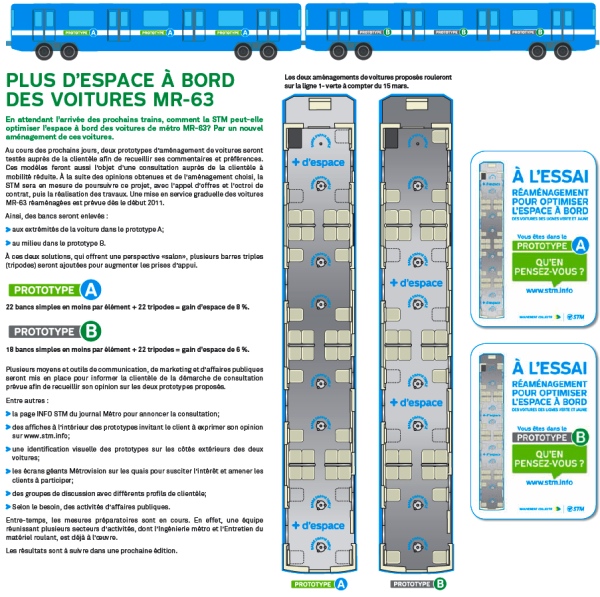 Metro cars may have fewer seats

Though it was reported back in January, it seems more certain now that, with all the delays pushing back the new metro car contract, the oldest cars still in service, the MR-63s used on the green line, will need to be kept longer and get an interior redesign to fit more people.

Unfortunately, the only way to fit more people into a confined space like this is to remove seats. The STM was to have put two prototype cars in service yesterday – one removes single seats near the ends of each car, while the other removes single seats near the centre of each car (removing double seats, like was done when the MR-73s were refitted, apparently isn’t feasible with these cars because of all the equipment underneath the double seats).

Obviously, not everyone is happy about the idea of squishing even more people into these cars and taking away the cherished single don’t-have-to-touch-anyone seats. Discussions are already under way at MetrodeMontreal.com and the Canadian Public Transit Discussion Board about it.

The Gazette’s Andy Riga has gotten Marvin Rotrand to tell him that three lines – 121 Sauvé-Côte-Vertu, 467 Express Saint-Michel and 535 R-Bus Du Parc/Côte des Neiges – will be served only by articulated buses as of June. Articulated buses will also be used on the 80 (Du Parc), 139 (Pie-IX), 165 (Côte-des-Neiges) and 67 (Saint-Michel) within a year, with studies about whether to expand them to the 18 (Beaubien), 24 (Sherbrooke – downtown), 105 (Sherbrooke – NDG), and 197 (Rosemont). Aside from having high ridership, the routes also need longer stop zones to accommodate the longer buses.

Buried in Riga’s piece is mention of a new type of fare the STM will be introducing on June 1. A daycamp fare will cost $12 and cover a trip for adult and 10 children under 13. (Children 5 and under already ride free with a fare-paying adult). This is similar to the family pass they brought in in 2008, which allows kids to ride free with their parents, but only on weekends and holidays.

This new fare will be welcome news for all those who take large groups of children on public transit, but will probably suck for a lot of people if this means more armies of prepubescent kids board STM buses around the island.

In case you missed it, the STM is now finally reporting on the status of the metro system using Twitter and Facebook, as well as on their homepage. So far it has reported only one disruption – the green line going down on Sunday.

Annoyingly, the reports on Twitter and Facebook are all done twice – once in English and once in French. Nevermind that the STM hasn’t been the most English-friendly organization on the planet in the past, but why not just setup two accounts if you’re going to do that?