Although I’m not 100% committed, looking at the list above I’m tempted to pick the CP option. It’s cheaper, it’s faster and it works better with existing commuter service.

Plus, one of the chief arguments against it, that Lucien L’Allier isn’t “central” enough, doesn’t really work for me.

The myth of the “central” station 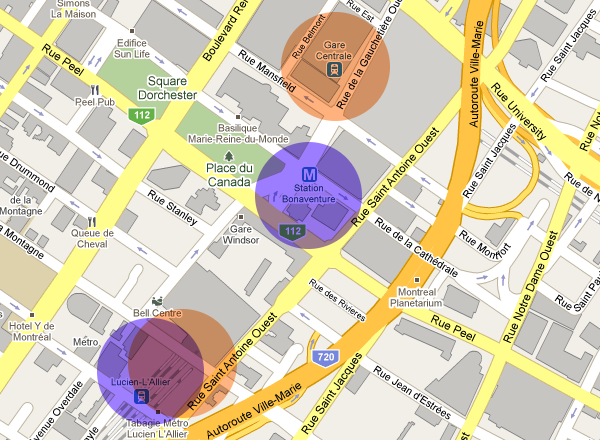 I’ve done the walk many times between Bonaventure and Central Station, and between Lucien L’Allier metro and train stations. Not only is Lucien L’Allier simpler (as soon as you exit the station you see trains) compared to the meandering underground route to Central Station, but it’s faster and requires less walking. And this entirely ignores a second direct transfer point at the Vendôme station, which would be worked on anyway with the new superhospital coming.

Lucien L’Allier would probably require some work if it gets high train traffic (an elevator from track level to metro level would help), but it’s definitely a better connection. If we assume a large number of people taking a shuttle train downtown will switch to the metro, Lucien L’Allier becomes a much better choice.

That isn’t to say Central Station isn’t better located for those walking to their destinations. Place Ville-Marie is an escalator ride away, and more large downtown hotels are within walking distance, as the ADM explains in their slick video. The ADM study says the Central Station option would see more use, but I don’t know how much of that is real and how much is perception. (And if that were the case, why don’t all commuter trains go to Central Station?)

I should clarify something about the CP route: It’s not exactly what AMT is proposing.

Instead of ending at Lucien L’Allier, the AMT is proposing that the railway deviate slightly near the end, and cross a yet-to-be-built bridge to reach a yet-to-be-built intermodal terminus on the south side of St. Antoine.

It’s at this point that people bring up the fact that if the Bell Centre hadn’t been constructed in the way, the commuter trains would end at Windsor Station and we wouldn’t need to build a new terminal.

Though the terminal would be mainly financed privately, it would still be incredibly expensive – not to mention ugly – compared to the simple solution of just having the trains use the two unused tracks at Lucien L’Allier that sit right next to the entrance to the metro station.

Some of the criticism of the CP route is actually just criticism of this silly idea of the AMT’s, which involves a lot of wishful thinking and can easily go very wrong.

What’s wrong with just running a train from Lucien L’Allier to the airport? Or having the Dorion/Rigaud line run an airport detour? The installation of an elevator to the metro and a shelter above the platforms would make things a bit easier on travellers, but I don’t think the option is so awful, so out of the way that it has to be dismissed at great expense.

It’s the simplest answer. So why isn’t it the correct one?

UPDATE (May 26): Henry Aubin also comes out in favour of the CP route.

53 thoughts on “The airport-train link: Let’s put our cards on the table”