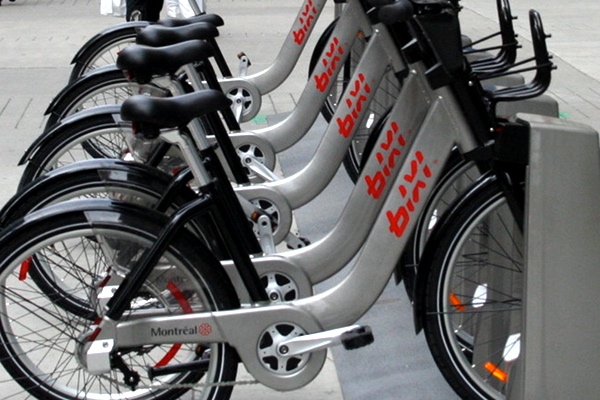 In July, I took advantage of a new discount deal that was just too good to resist: In exchange for signing up for the STM’s Opus à l’année annual pass, I’d get a $59 discount on the price of a yearly Bixi pass. So instead of costing $78, it would cost just $19.

The procedure is a bit awkward to get the discount. First you have to subscribe to the yearly Opus pass, which automatically deducts the cost of a monthly pass from your bank account on the 15th of the month. Once that’s done, you have to email your name and address to the STM, telling them you want the Bixi discount. They give you a discount code, which you enter into the Bixi website when you sign up for a yearly pass. Eventually in the mail you get a new Opus card (you can’t subscribe to the yearly pass on an existing card, but on the other hand they don’t charge you to send another one) and a Bixi key like this one: 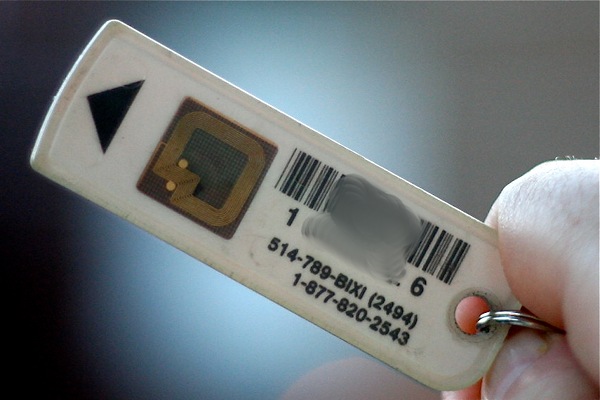 Underside of a Bixi key (with personally identifying data smudged out)

Anyway, on July 23, after registering my Bixi key with the system, I walked over to a nearby stand and at 12:23am I rented my first Bixi bike. According to Bixi’s records (they keep a running tab of your use on their website), I’ve used a Bixi 44 times since then for a total of 8 hours.

Though it might be fun to use Bixi as my main form of transportation, I live too far from work to be able to bike all the way there (it takes about 45 minutes to get downtown, while the Bixi starts charging after 30), and the basket is too small for my (admittedly large) backpack and regular grocery run. Still, it’s very useful for shorter trips, particularly those that would be less convenient using public transport either because they would require too many connections or because they’re at a time when buses don’t come as often. I use them regularly after a late night at work as an alternative to one of my two night buses.

Though I’ve become somewhat of a Bixi convert, hooking my bicycle helmet to my backpack when I head downtown, I’m still not sure about the economics. I think $78 is pretty expensive compared to the cost of a used bike, but I highly recommend Bixi at $19 a year (and note that, unlike their current promotion of $30 until the end of the season, the yearly Bixi pass is good for one calendar year, which means I can keep using mine until July 2011, albeit not during the winter when Bixi is not in service). And I’ve gotten a new appreciation of the convenience that Bixi offers. Not only can you pick up and dock the bike almost anywhere, but you don’t have to worry about locking it up, pulling off the seat, lights, front wheel and any other valuables, or dealing with any other elaborate anti-theft measures. All you need is a helmet (and that’s technically optional), and once the bike’s locked up you have no responsibility in the matter.

I bring this all up because of an article in The Gazette last week about a transportation survey conducted by McGill’s transportation research group. The survey, which is available online (PDF) via Andy Riga’s blog is quite long and filled with statistical analysis so dense I gave up on much of it, but one of the interesting points is that Bixi rides aren’t replacing car travel, but walking, public transit and rides on private bicycles.

The study itself – based on an online survey of more than 1,000 people – admits there are two large grains of salt to be taken with the results: a potential for sample bias (many of the respondents were young, single people who are more likely to fill out online surveys about their transportation habits or be friends with people who were publicizing it) and the infancy of the Bixi network might also throw off the data (what neighbourhoods it serves, what kind of people are likely to be early adopters, etc.)

It’s not Bixi vs. cars

Still, the fact that such a small percentage of people who use Bixi would otherwise drive isn’t so much of a surprise. Most people who drive come from far away, and Bixi is installed mostly downtown, in the Plateau and areas adjacent where public transit use is high and car use is low.

The perception that Bixi would somehow significantly reduce car travel is one that is actively pushed by Bixi itself. Its statistics include an estimate of how much greenhouse gas is saved by each ride (notably calculated not by distance travelled, but by how much time the bike is out, even if it’s not in motion). Though it comes with a disclaimer, Bixi is clearly trying to make a point about being good for the environment, and the numbers behind those arguments are sketchy at best.

But that doesn’t make Bixi a bad thing. People use it because they think it’s convenient, whether it’s replacing a public transit trip or a short walk. And people are paying for this privilege. Replacing private bicycles with Bixis may seem pointless, but they virtually eliminate the problem of bike theft downtown, which is a major motivator for me.

Less public transit use is a good thing

The survey shows that 33% of Bixi trips replace public transit trips – more than any other alternative mode of transportation. This has an indirect benefit: getting people off the buses and metros during rush hour leaves more room for others, and makes public transit more appealing for those who would otherwise take cars. Overcrowding during rush hour is a major complaint of transit users, and Bixi helps alleviate that.

Of course, that’s not much help during the winter, when most of those walkers, cyclists and Bixi users jump back on the bus.

UPDATE (Sept. 14): Riga has a follow-up blog post with reaction to the story, which also brings up a debate over whether taxis should be included as “cars”.

41 thoughts on “In defence of Bixi”