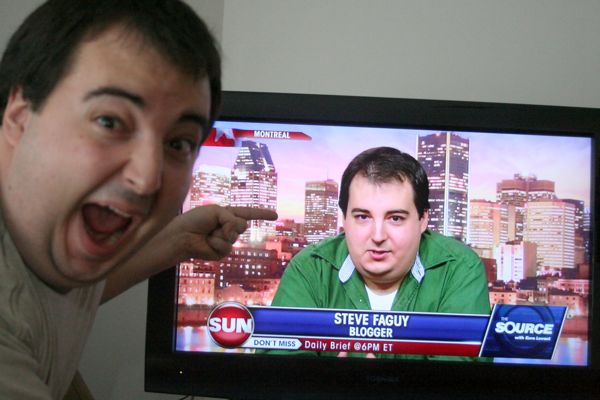 With apologies to Stephen Colbert

It wasn’t quite the way I pictured it would be, but on Friday evening I was on national TV for the first time.

Well, maybe calling it “national TV” is an exaggeration. It was during the 5pm hour on a Friday, and the audience was probably somewhere in the low five figures at best. I was actually more curious about the experience than I was excited about the idea of having wide exposure or getting famous or something.

I got an email just before noon on Thursday from Aaron Rosenberg, a production assistant with The Source with Ezra Levant, the first of four (now five) prime-time “straight talk” programs on the new Sun News Network. He wanted me to appear on the show on Friday to discuss a proposal that has been floating around recently about establishing a “professional journalist” certification in Quebec.

The proposal has been public information for quite a while. I’ve even written about it multiple times as it made its way through the Fédération professionnelle des journalistes du Québec and was a key feature in a report on journalism by professor Dominique Payette. But it was only after Quebec culture minister Christine St-Pierre proposed a public consultation on the matter, prompting an opinion piece from Graeme Hamilton in the National Post, that Sun News and others took notice.

Last Tuesday, Levant went on a rant in video and in text, questioning why Quebec has a minister of communications, suggesting that the fact that St-Pierre and Payette were former Radio-Canada journalists showed this was some government/CBC conspiracy to control what we see and hear through “government journalists”. His opinion piece contains such loaded terms as “Soviet-style”, “dictator”, and “corrupting influence”.

I responded to Rosenberg that “I’d be happy to clear up some misconceptions people may have about this proposal.” I figured that was a more diplomatic thing to say than “I’d be happy to provide some information to combat the ridiculous hyperbole being spewed by your show’s host.” My only condition was that I be out of their Montreal studio by 3pm so I could make it to my real job at 3:30.

No problem, he said. The show is recorded in advance, around 2-3pm, so there’s no trouble getting me out by 3. 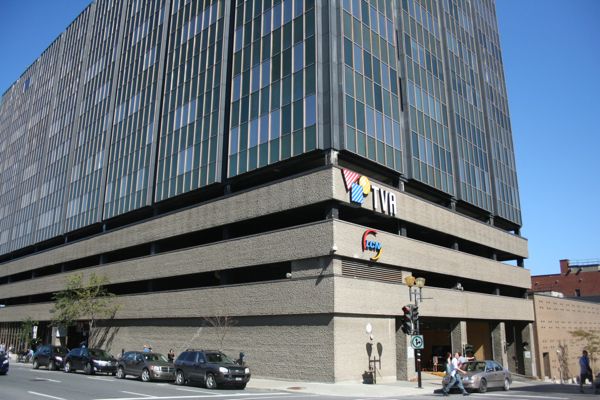 I had an appointment for 2pm Friday at the TVA building on de Maisonneuve Blvd. I’ve never actually been in this building before, so it was an educational experience. I stopped by security, got an electronic pass and made my way to the 10th floor. There, I wasn’t quite sure where to go (there’s no sign for “Sun News” anywhere), but someone eventually found me and brought me to … makeup.

I hadn’t really expected that part. I know TV people get makeup and hair done before they go on air, but I wasn’t a journalist or an anchor, I was just a guy they were bringing in to talk about something. So while making some small-talk, the makeup artist patted my face to get rid of the buckets of sweat, then put on some flesh-toned foundation. The hair guy played with my hair for a few seconds, and I was done. Next, I was brought into the TVA newsroom. 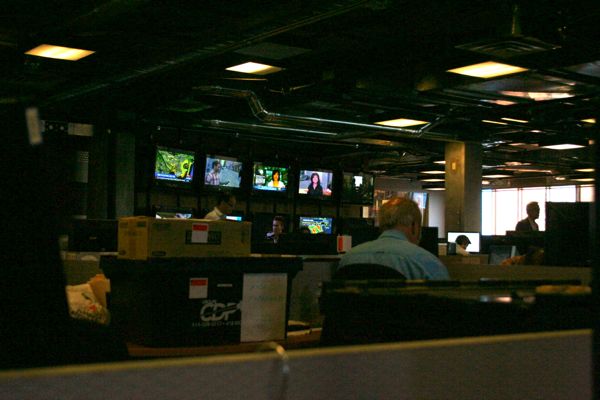 I was seated at an empty desk at the far end, and stayed there for a few minutes. There were boxes all over the place, because everyone was moving around. TVA just launched a new studio, and this one on the 10th floor is being dismantled and replaced with a new one for LCN.

I also noticed that there were 10 high-definition television screens at the other end of the room, and not one of them was showing the Sun News Network. They had the usual main networks, plus CNN. One even had TVA’s shopping channel.

After a few minutes twiddling my thumbs, I was brought to just outside Studio J, a single-camera room with a fake backdrop where remote interviews take place. There was a man in there, and I was next in line to use it. 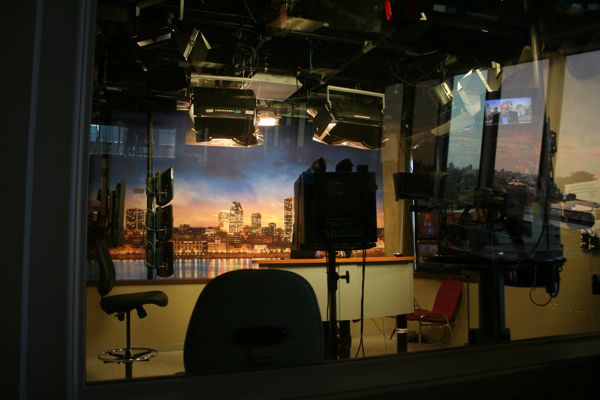 Studio J at TVA with its fake backdrop

By now it’s about 2:30. After a few minutes, the interview before mine wraps up, and a technician begins setting everything up for me. The earpiece is cleaned with alcohol and clipped to the back of my shirt, and I’m handed a lapel microphone to run up the front of my shirt and clip on. I’m showed the volume control, the camera is pointed at me, and they arrange to hook it up to Sun TV in Toronto. It takes a few minutes, but I finally start hearing the live Sun News feed in my ear. It’s the voice of anchor Caryn Lieberman, who hosts the 1-3pm show.

The technicians leave, and I wait. And wait. And wait. I can hear the network in my hear, as Lieberman does her regular segment talking to producers and hosts about what’s coming up on their shows later (she talks to Levant, but he doesn’t tease his segment with me). I don’t see the network on the monitors though. Instead, one is showing an infomercial on TVA, while the other shows a western movie with Clint Eastwood on specialty channel Prise 2.

After about 10 minutes, I hear a dial tone, and the signal goes blank. I keep waiting. I start wondering if they’ve forgotten about me. I peer out the window, and spot some recognizable TVA faces walking about, including Pierre Bruneau. I’d say hi, but I’m literally tied to a chair.

Finally, just before 3pm, after about 20 or 25 minutes of waiting, I hear a crackling in my ear and then the tail end of an interview between Ezra Levant and another guest. Levant says “coming up, a blogger with a funny name” and then throws to commercial. After the music stops, he asks if I can hear him, and for the first time I’m actually talking to someone in Toronto. 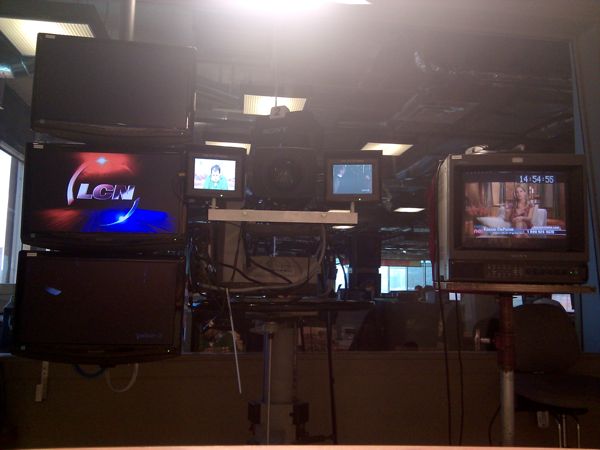 Talking, but not seeing. I can see myself on one of the small monitors next to the camera lens, but I don’t see Levant. During our entire interview, I can’t see the man I’m talking to. If you see my eyes wander a bit, that’s partly why. I’m talking to a voice in my ear.

I make some crack remark about him saying I have a funny name. He responds that he actually likes it, and likes my blog because I’m not “beholden to” any group. By the time the show goes to air, he re-edits the piece to say “an unusual name” instead of “funny”, which I kind of find funny.

Our conversation goes on identically to what ended up on air. Levant suggests my name would somehow cause me to break human rights laws in Canada, something I dismiss politely. I then explain through the interview that this wasn’t St-Pierre’s idea, that this was the journalists – not the government – that first proposed it, and that this isn’t a bill or a law yet but a public consultation. I even get Levant to admit that his five-alarm fire “is maybe not a five-alarm fire after all”, though I doubt that means they’re going to treat the issue any differently.

I was actually a bit surprised by how many important points I was able to get across. I’ve done enough six-minute interviews for radio that I know how fast they can go. The only thing I didn’t get a chance to do was challenge Levant’s bizarre characterization of the FPJQ as a “secret society” with a “secret handshake”, which isn’t even remotely close to being true.

I should probably point out here, for the sake of those who don’t want to read my earlier posts, that I actually agree with Levant on the fundamental issue here. I think creating a professional journalist status is a bad thing, and could have lots of negative repercussions for freedom of information, creating two classes of journalists and using government power to establish an elite media that has even more reason to look down upon the rest of us. It’s hardly a conservative-only viewpoint. Even Le Devoir’s editor was critical of this idea. But just because I agree with his conclusion doesn’t mean I agree with the reasoning or the conspiracy theories.

Anyway, eventually Levant cuts me off in the middle of an “uhh” and it’s over. He throws to commercial again, and after a few seconds the line goes dead. No goodbye or thank-you, just a click and nothing. I’m just a guy sitting alone in a room again. Being about 10 minutes beyond my 3pm deadline, I unclip the microphone and earpiece, grab my bag and slip out the door. I arrive at work just on time for my 3:30 shift. 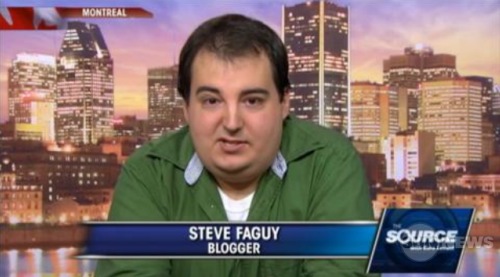 I haven’t published a full review of the Sun News Network. If I ever get enough free time, I’ll finally put it together. But I’ve seen a lot of the network, and I know it well enough to question its commitment to journalistic integrity. As much as I think some of the opinions its personalities have are worth debating and worth adding to the public discourse, it’s the way they express those opinions, ridiculing those who disagree with cherry-picked facts or even conjecture made up from pure paranoid fantasy that really gets me, just as it does when I see it on MSNBC or in clips from Fox News.

But, since government censorship is unlikely to stop it (nor should it), there are two ways to deal with this: boycott them, hoping that their business model will eventually fail and they’ll have to shut down for economic reasons, or work with them, treat them like adults, and try to engage them in constructive dialogue like adults.

Maybe it was because of an irrational desire to want to build bridges with enemies in the wake of Jack Layton’s death, or maybe it was a naive hope that the truth could act as a cleansing force, but I decided to try the latter option. And I think Levant’s viewers were probably better informed about an important issue after my appearance than they were before.

Call me naive if you will, but I think once Sun Media gets over its persecution complex, we can start having honest, serious discussions about the issues being brought up by conservatives.

My first Sun News appearance (unpaid, I should add – it’s not like I did this for the money) was fun, overall. Whether I’d do it again, I don’t know. It will probably depend on the issue, and on whether Sun News producers are as interested in reasoned sober analysis as they are in hyperbolic buffoonery masquerading as righteous political opinion.

10 thoughts on “My six minutes with Ezra Levant”