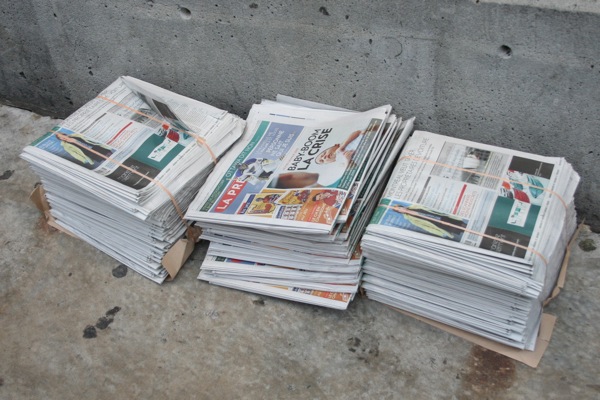 You can see some national trends on NADbank’s website in a PDF presentation. In general, it shows that print is still way ahead of online, that most people still get their news from newspapers in print form, and that rich people are more likely to be print readers. They also show, unsurprisingly, that online readership is continuing to grow, and is more than compensating any losses in print (at least in terms of eyeballs – advertising revenue is an entirely different story).

Unlike services that measure number of subscribers, NADbank gets its data through polling the general population, asking questions like “did you read this newspaper yesterday?” Its polling covers only the market and doesn’t measure out-of-market readership in print or online.

Infopresse crunches the numbers for Quebec newspapers, which for some reason doesn’t include The Gazette. Their chart (PDF) shows little change among La Presse and the Journal de Montréal (which is down slightly from 2010 – is that because the lockout is over?). Le Devoir, meanwhile, has held on to significant gains made between 2009 and 2010, though it is still the last-read paper in Montreal.

Among the free dailies, both have achieved significant gains in readership. 24 Heures is up 12%, profiting mainly from the fact that as of January 2011 it has exclusive rights to distribute in the metro system. But while one would expect competitor Metro to lose a significant amount of readership because of this, it has only continued to grow, up 3% in the last year. It’s undoubtedly more expensive for Métro to hire all those people to hand out papers in the morning, but it is clearly working to stop too many people from switching.

The slower rate of growth for Métro means that 24 Heures is catching up. While in 2009 Métro had 26% more readership on a typical weekday, that’s down to 12%.

The Gazette says its combined readership has hit a five-year high of 554,800 per week. Its print readership is 283,300 on weekdays, 318,900 on Saturdays and 498,000 at least once a week. 24 Heures’s gains have pushed it past The Gazette in terms of average weekday readership.