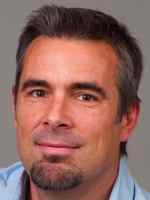 Max Harrold, a news reporter for The Gazette since 2006, has been hired as the new Quebec City Bureau Chief for CTV News. The move was announced this morning with mixed feelings by Gazette city editor Michelle Richardson. He leaves the paper on Nov. 20.

Harrold, who tells me he’s 47 but has always seemed so much younger at heart, has been a general assignment reporter, specializing in breaking news. He’s also the guy behind the weekly Squeaky Wheels column, answering readers’ questions about issues involving transportation in Montreal. Before joining The Gazette he wrote for it as a freelancer, wrote for the Discovery Channel program How It’s Made, and worked in off-air roles at Global Television and CBC. He also worked for the short-lived Montreal Daily News, and was there when the paper shut down in 1989.

He’s a native Montrealer, but lived and worked in Los Angeles and New York for 13 years, and studied at Columbia Journalism School.

Harrold told me he had informal discussions with CTV Montreal News Director Jed Kahane before the latest round of buyouts at The Gazette, with the possibility of having to look for a new job at the back of his mind. In the end that would become unnecessary, since there were no layoffs of reporters, but discussions continued.

“I thought it would be for an off-camera job or a research job,” Harrold said when he called me from the office, where he’s getting congratulations from his colleagues. But Kahane needed someone with excellent reporting skills for the Quebec City job, and Harrold fit the bill.

“It’s an interesting time in Quebec City, and it’s a bureau where I want someone who overall has an understanding of quebec politics,” Kahane said. “Max is a veteran, he’s an experienced editorial guy (and) he was the kind of person I was looking for.”

Harrold doesn’t have any on-air experience in television, though he went through a screen test that was enough to convince Kahane the jump to television could work. Kahane points out that other print journalists have moved to television with great success. He mentioned people like David Akin at Sun Media. Nancy Wood, an anchor at CBC Montreal, is another former Gazette reporter and print specialist who made a very successful transition into broadcasting.

Kahane said that with strong editorial judgment, learning the technical part isn’t a big problem. The former is valued far more than the latter in a television reporter.

Nevertheless, Harrold admitted it will be a transition, and he’s already been practicing proper standups in front of a mirror.

Harrold begins at CTV in December, and will spend his first few weeks training, learning the ins and outs of TV reporting in general and CTV’s systems in particular. Kahane said he expects Harrold will do some on-air work in Montreal (he couldn’t say when we should expect to start seeing Harrold on air) and be ready to report from Quebec City by the time the National Assembly reconvenes for the new year in February.

CTV’s last Quebec City bureau chief, you might recall, had a fairly public resignation in July 2011. Kahane said he didn’t make any special requests of Harrold, though he did ask if Harrold had a television at home (Kai Nagata famously did not even though he was a TV reporter). Harrold said he has two. The embarrassment for CTV meant a lot of hesitation at choosing someone new for the position, particularly for going with someone young and inexperienced, so the position remained unfilled for more than a year.

Maya Johnson has been filling in, covering Quebec City and the National Assembly for the past few months. She’ll return to Montreal, where Kahane said she will continue her reporting, which he qualified as excellent, from here.

Harrold’s new job means moving to Quebec City (and finding a fluently bilingual anglophone willing to move to the provincial capital is also a big challenge in filling this position). Harrold will look for a place in Quebec City and expects to live there for a little while before his husband Greg joins him.

There’s no word yet on whether The Gazette will be looking to hire someone to replace Harrold, though I wouldn’t be surprised if Richardson is already getting unsolicited offers.

On a personal note, since Max is a friend, I’ll wish him well. But a warning: no mercy on the hilariously embarrassing gaffes that make live TV so much fun to watch.