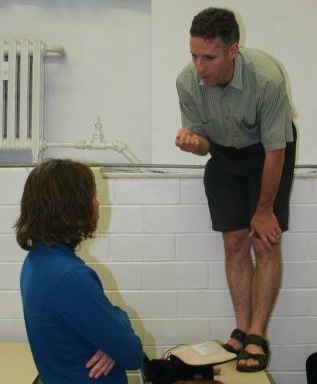 Bob Babinski, teaching a student in my intro to broadcasting class in 2004.

As Rogers officially takes over control of CJNT from Channel Zero, and the station adopts the full City primetime schedule as of Monday, Feb. 4, it has announced its first hire: Bob Babinski, a freelance television producer specializing in sports, and a part-time professor in Concordia University’s journalism department, has been named “Executive Producer and Local Content Manager” for what will on Monday officially become City Montreal.

Though only announced on Monday, Babinski has been on the mind of Rogers Media Broadcast President Scott Moore for quite some time. He’s told me in previous interviews that he had someone in mind for this job, but couldn’t name him because he couldn’t actually hire him until the acquisition of the station was approved by the CRTC.

Babinski and Moore know each other from their time at CBC Sports. As his biography shows, Babinski worked for CBC Sports covering the Olympics, the 2010 World Cup, and producing feature stories for Hockey Day in Canada. Moore became the head of CBC Sports in 2007 before leaving in 2010 to go back to Rogers.

Babinski has also been teaching part-time at Concordia University since 2000, with students including yours truly. He’s currently teaching a feature writing class on Tuesday mornings.

In his new position at City Montreal, Babinski will be responsible for its local programs, Breakfast Television (the weekday morning show) and Connected Montreal (the weekly sports show), and the hiring of its 20 to 30 staff in front of and behind the camera. He tells me he’s starting by going to Vancouver, Calgary and maybe Toronto next week to visit their programs to learn how they work.

He has until August to do put these shows on the air, so we’re not quite at the hiring stage yet. But Babinski said he’s already been contacted by many people, including many former students, who heard about the appointment and congratulated him, some with CVs included. “My hope is that the staffing process will happen in the spring,” he said. But he wants to hear from as many people as possible who might be interested in positions. (His email is bob.babinski@gmail.com.)

I asked Babinski what his vision of the morning show was. He used words like “urban”, “young” and “authentic”, which might give us an early idea of how it will distinguish itself from Global Montreal’s morning show, which has already started appealing to West Island anglos.

“I want it to be a celebration of what’s good and great about Montreal,” Babinski said, particularly focusing on its various cultures and reflecting “the international flavour” of the city.

As a freelancer for such a long time, I also asked Babinski if he’s ready for a return to a 9-to-5 job. He laughed, saying I wasn’t the first person to mention that to him. But he said this job fits in with the way he sees work.

“I’ve never seen work as something that starts at a certain time of day and ends at a certain time of day,” he said. “I don’t think the idea of a 9-to-5 job is what drew me to this opportunity.” Instead, it was the chance to “be part of something that’s starting from scratch, and make my mark on it,” to have “one big project that I’m totally into.”

Babinski will be totally into work for the next few months. Starting a television station from scratch isn’t a simple thing to do.

Moore confirms that “assuming some bits of paperwork get done,” CJNT officially switches hands at 5am Monday. The electronic schedule goes blank as of that time. It had been previously established that the station would adopt the full City primetime schedule that day, because it’s the day of the premiere of the City original sitcom Seed, at 8:30pm. A schedule on City’s website . has been updated since this was posted. Metro Debut is no longer listed, and neither is any other ethnic programming on weekdays, except for a small block at 7am.

Ethnic programming will eventually come back to Montreal with ICI, a new cooperative station set to launch in late spring or early summer.

16 thoughts on “City Montreal gets a boss: Bob Babinski”