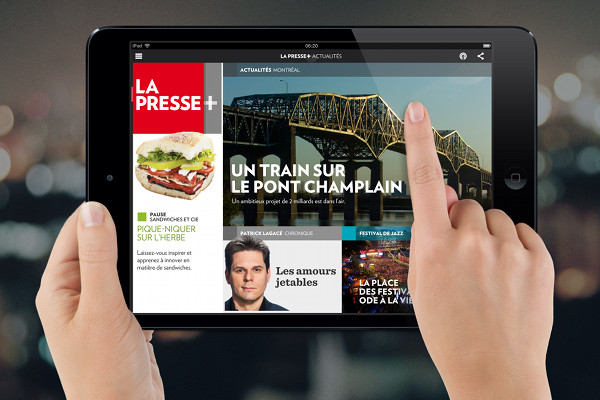 You can read news stories about the new app from Canadian Press, the Globe and Mail and J-Source, or just go to the website and read the press release (also in English), or see the note to readers from André Desmarais or the introduction from publisher Guy Crevier.

I don’t have an iPad, so I can’t really review it (see links to early reviews below). Based on what I’ve seen and heard from others, it seems to be very well designed with plenty of cool features. It might be the best newspaper iPad app ever created. (A version for Android tablets is expected by December.)

For the sake of argument, let’s assume that’s true. Then what?

La Presse is giving this app away for free, arguing that there’s an “irreversible” expectation that content online should be free. This despite the fact that most other large newspapers in Canada have either adopted a paywall or are in the process. And despite the fact that many apps on the iPad actually do manage to get money out of their users.

The paper doesn’t stop there. Seeing this as a transition, from the printed medium to an electronic one, it is essentially encouraging its readers to cancel their print subscriptions and move to this new platform. If enough people do so, they could shut down the print newspaper completely.

In a world where print advertising and print subscription fees remain the largest sources of revenue for newspapers, where the increase in online ad revenue is met by a decrease in print ad revenue that’s an order of magnitude higher, all of this seems absolutely insane.

It’s not that I don’t think newspapers should be investing during this transitional time. Nor is it that I don’t want La Presse to succeed (though professional jealousy might be a small part of it). I just don’t see how the numbers work. They spent $40 million and almost three years producing this app. They’ve hired 100 extra people, who will work alongside the 200 journalists already on the print side. And they expect that all of this extra spending, plus the loss of subscription fees from people who abandon the print edition, will be made up for by iPad advertising alone.

The numbers just don’t make sense to me. Nor, according to the articles above, do they make much sense to analysts and competitors.

We’ve had a situation like this before. The Daily, an iPad newspaper launched by News Corporation, failed after two years because it didn’t get a large enough audience. To his credit, La Presse’s Guy Crevier has an answer to that, telling the Globe that The Daily didn’t have big scoops and its content wasn’t worth paying for.

But The Daily also had a much larger potential audience, while La Presse is limited to the French-speaking Quebec market.

That’s not to say that making this work would be impossible. It just sounds very difficult.

And the thing is, we won’t know whether it is successful, unless they tell us. La Presse is owned by Gesca, which is owned by Square Victoria Communications Group, which is owned by Power Corporation. Power, the only one of these that reports its finances publicly, doesn’t break that information down much, and so we know very little about La Presse’s balance sheet. Many critics of Power Corporation suspect that La Presse in particular is a big money-loser that is kept afloat as a vanity project of the Desmarais family. I don’t know if that’s true (nor am I necessarily against very rich people owning money-losing newspapers for reasons of ego, provided they’re at arm’s length), but the fact is we don’t know whether La Presse pays for itself, and we won’t know if this app will help or hurt its finances in the short, medium or long term unless something changes.

One thing we do know, and that everyone can agree on, is that La Presse is taking a big bet on this project. If it succeeds, it could very well revolutionize the newspaper industry. And if it fails…