A week after the Journal de Montréal reported that CKRS-FM in Saguenay wants to become a Rythme FM, the CRTC has published an application from the station that confirms the news.

CKRS is owned by Richard Speer’s Attraction Radio, a growing new player in the Quebec radio scene. It officially owns five radio stations, including CJIT-FM in Lac-Mégantic. It currently has an application in front fo the CRTC to purchase CJLM-FM (M 103.5) in Joliette from a cooperative for $750,000, a deal announced in January 2013. (The deadline for comments on that was last week, and there were no comments filed on that application. A hearing is scheduled June 26, but that’s a formality. The parties aren’t being asked to attend.) And it recently announced a deal to buy the Réseau des Appalaches, owner of Passion Rock and O97,3 stations in the region of Victoriaville/Thetford-Mines.

CKRS, whose AM predecessor dates back to 1947, was once part of the Corus Quebec radio network. It was left off the list of radio stations sold to Cogeco in 2011, and was slated for closure. It was picked up by Radio Saguenay Inc., a group whose owners included Guy Carbonneau. But losing about $400,000 a year (less than the $1 million a year that it lost under Corus), Radio Saguenay gave it away to Attraction for $300,000, a purchase approved by the CRTC in 2012. CKRS and became Attraction’s third station, all of them acquired mere months apart.

Though CKRS’s licence was renewed just a few months ago, Attraction says it feels it can’t continue operating the station in its current format.

Attraction Radio undertook efficiency measures to reduce the serious losses the station was experiencing, while seeking to build audience, it tells the CRTC in its application. “But nearly two years after taking over interim management of the station and later becoming owner of the station after approval by the commission, Attraction Radio has come to realize that, in the current market, only abandoning the mainly talk format and switching to a musical format would permit a relaunch of the station and a return to profitability.”

The CRTC doesn’t regulate station formats much. But one exception concerns the mix of music and talk. A station with more than 50% talk is considered a specialty station, and requires CRTC approval before switching to a format that is mainly music. (The reverse is also true, which was one of the problems Radio X in Montreal had until last month.)

CKRS, which is licensed as a specialty talk station, already operates as a music station during the day. It fulfills its talk obligations by airing Cogeco-produced sports and talk programming evenings and overnight.

The market dominated by Bell

The Saguenay market is talk-heavy. In addition to CKRS and Radio-Canada, it’s also home to RNC Media’s Radio X station CKYK-FM. Cogeco doesn’t own any stations in the market, which means it’s dominated by Bell’s CFIX-FM (Rouge FM) and CJAB-FM (NRJ), who together have a 70% commercial market share. Radio X has 24%, leaving only 5% for CKRS.

Attraction breaks down market share by type of station, showing that the three music stations (including Espace Musique) have almost twice the listening hours of the three talk stations that subscribe to BBM ratings. It also commissioned a survey showing listeners in the region want more music programming, and are receptive to radio shows hosted by Quebec vedettes.

And so we have the proposal to turn CKRS into Rythme FM. Attraction has an agreement in principle with Cogeco to become an affiliate of Rythme FM. The agreement would be for three years, but details are still to be determined.

The Rythme FM network has stations in Montreal, Sherbrooke, Trois-Rivières and St-Jérôme, and a station in Saguenay would help it become more of a Quebec-wide brand like NRJ and Rouge.

Affiliations aren’t very common, but they do exist. When Leclerc Communication in Quebec City bought CFEL-FM and CJEC-FM in Quebec City from Corus (who couldn’t keep them because it would have meant owning four FM stations in that market), the stations kept their CKOI and Rythme FM branding, respectively. (CJEC-FM dumped Rythme FM for WKND in 2012.)

The schedule of a Rythme-FM-ified CKRS would look like this: 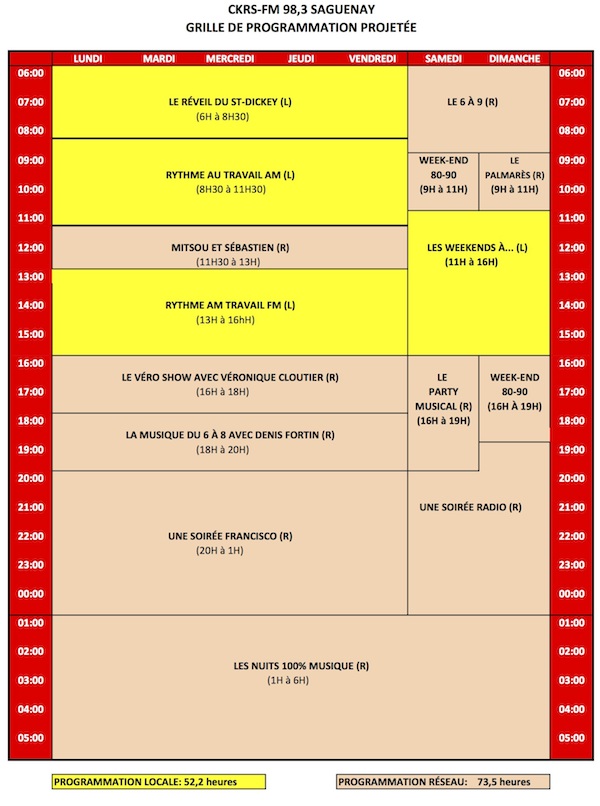 Proposed CKRS programming schedule, showing about 50 hours a week of local programming (in yellow) and the rest from the Rythme FM network (in red).

“The conversion of CKRS-FM to a music station affiliated with the Rythme FM network will rebalance and excite the Saguenay radio market,” the application reads. “This conversion will favour an increase in competition in a market that is so dominated by Bell Media and allow the use of a format and the broadcast of programming that is not currently accessible to the audience in this market.”

Attraction’s financial projections show that CKRS could increase both local and national ad revenue by 20% per year and become profitable by 2017.

“The rebranding of the station won’t allow CKRS-FM to immediately become profitable,” it writes. “Attraction Radio expects that it will have to invest in the short term considerable resources in promotion to take advantage of the new format of the station and make it known in the market.” Its projections show between $400,000 and $500,000 a year being spent on promotion over the next three years.

Closure of two stations a possibility

Attraction warns of dire consequences if the application is denied. Not only would it quickly shut down CKRS-FM, saying it’s unrealistic to imagine that after these ownership changes, someone else could come in and take the risk of relaunching the station as a talk station, but it also threatens the existence of CKGS-FM (Kool 105.5) in nearby La Baie, because it says CKGS survives “in large part because of savings in costs caused by synergies in the combined operation with CKRS-FM.”

Considering the market and the station’s situation, approval here is likely. The station has clearly lost money for a long time, and needs a change to keep it afloat. The market, meanwhile, has Radio-Canada and Radio X offering talk programming, even if the latter isn’t technically licensed as a talk station. Musically, the presence of Rouge FM and NRJ stations and the absence of competitors from Cogeco and others means Bell has a stranglehold on the market, and increased competition is warranted.

CKRS’s full application can be downloaded here (5MB .zip file). The CRTC is accepting comments on it until June 26. Those comments can be submitted using this form. Note that all information submitted, including contact information, becomes part of the public record. Comments should also be sent to the applicant at schamberland@attractionradio.ca, or faxed to 418-545-9186, or by mail to 121, rue Racine est, Saguenay, QC, G7H 5G4.