Everything on the tablet 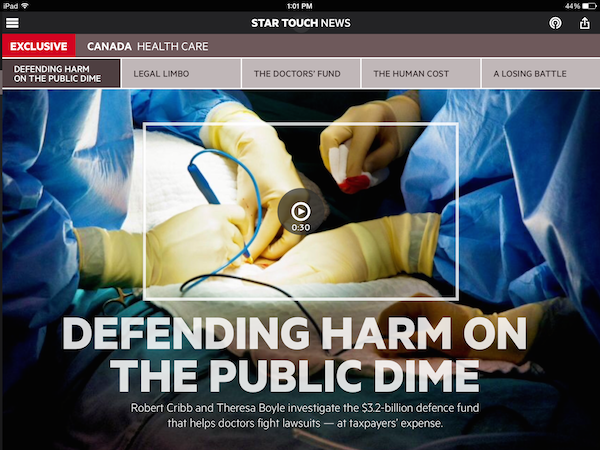 Though it’s getting a lot of attention in English Canada, the Star’s Star Touch app doesn’t have much that’s new. It’s basically La Presse+ in English. It has the same interface, which is very pretty but also has some awkward usability issues (like being difficult to navigate with one hand and having shared screens online that don’t link to related stories). Lots of photos, short videos, interactive ads. Even the byline styles are the same as La Presse. For an idea of how it works, you can read this story I published two years ago.

Like La Presse, the Star’s app requires a lot of manpower. The Star says it hired 70 people for this app. And while the Star is Canada’s biggest newspaper in terms of circulation, it will require a lot to make that profitable.

Everything but the tablet

For the Edmonton Journal, meanwhile, the changes are major and many are made to save money rather than spend more of it.

Nice to see @edmontonjournal keeping with the political times. For years it was a cool blue, now it's bright orange. pic.twitter.com/kuzbJ1CZA8

The print edition gets a redesign that’s very familiar to readers of the Montreal Gazette (my employer), Ottawa Citizen and Calgary Herald. The template is virtually identical, except for the logo: The new Journal logo is an orange square, apparently meant to capture sunsets and Alberta’s beauty in the fall but already seen by some cynics as declaring allegiance to the NDP. The pattern in the logo is meant to represent the river valley.

Our #NewEdmontonJournal logo is part of new designs for all our sister papers. Four of us have the new look so far. pic.twitter.com/xmhUhcecuo

Other changes mirror those made in other 2.0 redesigned papers. The business section has become “FP Edmonton”, for example.

But the Journal has gone a step further with the introduction of the “NP in the Edmonton Journal” section, which will be 8-12 pages long and feature stories from the National Post using Post-style layouts. This is the first time Postmedia has done something quite like this (though it had some FP pages in business sections before the redesign), and one would expect it to expand to other papers, which would save on production costs.

(I have no inside info on this, so don’t take my word as some official source here.)

The website is based on the same WordPress platform as other Postmedia 2.0 websites. And at first glance I don’t see anything there that’s different from the Gazette’s website.

The smartphone app does have some upgrades though, based on feedback from the apps of the other papers.

We can probably expect these improvements to eventually make their way into other papers’ apps.

On the tablet, though, little has changed. Its logo has been updated, but otherwise it hasn’t changed from the old app that automatically grabs stories and photos from the website.

The fancy new well-designed tablet apps for the Gazette and other papers haven’t been terribly popular yet, and while everyone has a theory as to why (insufficient marketing, not enough additional editorial staff, a La Presse conspiracy), Postmedia is taking a step back there and rethinking its tablet strategy.

In the meantime, tablet users can still visit the Edmonton Journal website, whose responsive design is meant to work on any device.

La Presse was the first big test of whether a big investment in a new form of delivering the news can pay off. So far results are promising there. The Toronto Star will be the next big test, to prove that La Presse wasn’t a fluke.

Star Touch is available free for iPad. An Android app is promised later this fall. The Edmonton Journal smartphone app is free for iPhone and Android, and its website uses Postmedia’s meter system.