This was going to be it, the deadest of deadlines, the date of no return when we can finally declare that the Tietolman-Tétrault-Pancholy Media project for AM radio stations is dead and not coming back. The CRTC had promised a year ago that the first of them would not be given an extension past Nov. 21, 2015. It even bolded the word to make it clear.

But it seems the commission is willing to give this phantom company one more chance. In a decision dated last week and posted online yesterday, it has given a rare third one-year extension for the establishment of a French-language AM radio station at 940 AM, and a second one-year-extension for an English-language station at 600 AM. They now have until Nov. 21, 2016 and Nov. 9, 2016, respectively, to begin operations.

In a letter to the CRTC dated Oct. 20, managing partner Nicolas Tétrault explains that the company is finalizing a deal to acquire from Cogeco Diffusion the transmission equipment at the Kahnawake site, as well as the rights to use the land (subject to Kahnawake band council approval, which they believe is a mere formality).

Tétrault says the site is ready for transmission at 940 kHz, and requires only “minor modifications” to be ready for 600 and 850 (the latter is a French-language sports radio station first approved in 2013).

The letter requested “six to twelve months maximum”, but then again the last extension made a similar months-away promise that was never realized.

So we have another year of guessing and arguing whether this project will ever see the light of day. There still have been no announcements as far as studio location, on-air staff, management, name, callsigns or anything else.

The letter approving the third extension doesn’t give reasons for the exceptional treatment, and only states again that this will be the final extension (a similar letter says the same about the second extension for 600 AM). CRTC’s media relations offered this explanation when asked:

Usually, the second extension granted by the CRTC to start a service is final. However, in certain exceptional cases, the CRTC grants a third extension to commence a service when the justification given in the request is sufficient and that the service appears to be imminently commencing. This was the case for 7954689 Canada Inc. 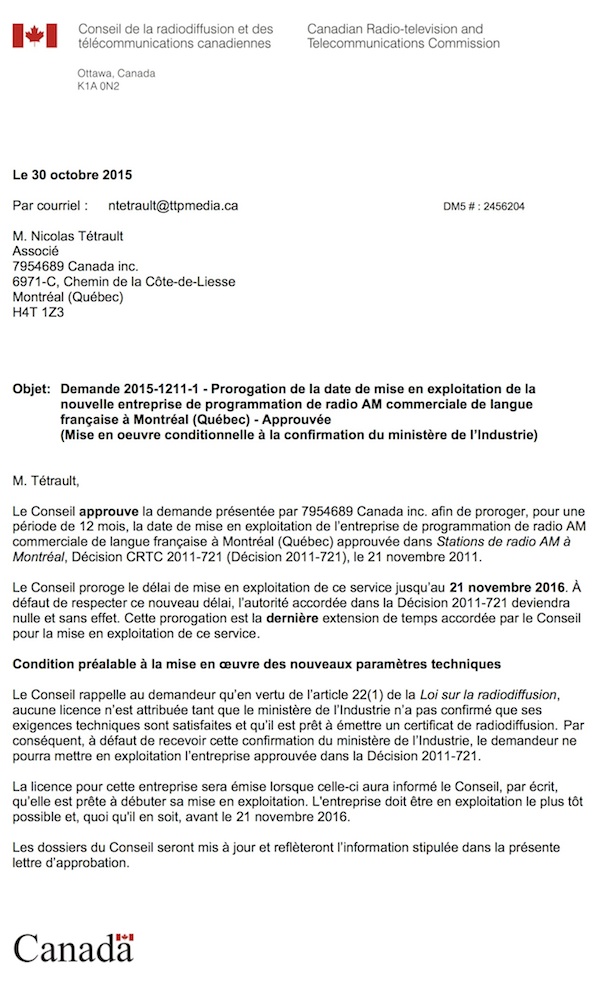 22 thoughts on “CRTC changes its mind, gives TTP Media yet another extension on AM radio stations”