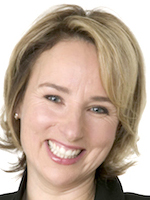 It’s been almost two years since Jacqueline (Jacquie) Czernin left her job as host of Breakaway on CBC Radio to be with her ailing mother in Kelowna, B.C., on what was supposed to be a temporary leave. But every time she was supposed to return, the date got pushed back.

Finally, it reached the breaking point, and last month it was announced she wouldn’t be coming back.

Today, her show aired a long-distance conversation between her and Quebec AM host Susan Campbell about Czernin’s 25-year career at CBC, including some clips of Czernin’s work (like getting Brian Mulroney to sing).

The staff at Breakaway, which is based in Quebec City and can be heard on the Quebec Community Network (most CBC Radio One stations in Quebec outside Montreal), have been getting messages of support from listeners, and Czernin, who gets a bit emotional during the interview, repeatedly expresses gratitude.

A permanent replacement host hasn’t been announced publicly, but Rachelle Solomon, who has been hosting Breakaway since Czernin left, would be the obvious choice.

One thought on “CBC Quebec says goodbye to Jacquie Czernin”