A curious bystander who looks at a map of Montreal’s subway and train networks together would quickly ask themselves a question: Why are there no transfer points where some of these lines cross?

Recently, the Agence métropolitaine de transport decided to ask itself this question in terms of two crossings of the Montreal-Deux-Montagnes train line: 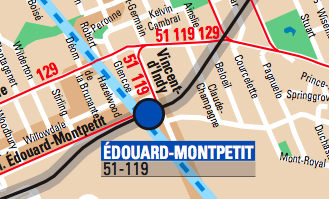 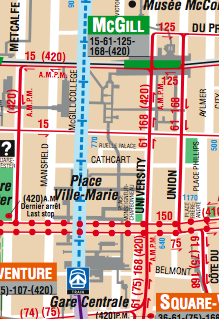 Both of these stations are close enough to the Mount Royal Tunnel that such a concept theoretically would make sense.

But it’s not that easy…

The AMT commissioned a pre-feasibility study to see about creating underground train stations near these metro stations. “Pre-feasibility” basically means “is this even possible?” and “does this even make sense?” If both of those answers are “yes”, then it comes to the more complicated feasibility study, which determines how it will be done and how much it will cost.

The study is available as a PDF here, but I’ll summarize some salient findings: 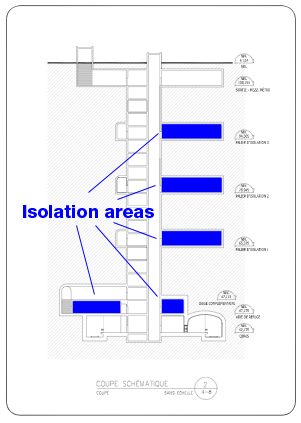 Fire safety codes require new underground installations such as this one to be able to evacuate everyone within six minutes. That’s plainly impossible in this case. Anyone who’s not a marathon runner won’t be able to walk 20 storeys up in a lifetime, to say nothing of doing it before a fire sucks out the oxygen you’re so desperately trying to breathe. So instead the study proposes the use of isolation areas, which would block out the fire and provide oxygen to people escaping the fire.

It’s pretty detailed for a “pre-feasibility” study. And the Edouard-Montpetit station transfer makes sense. It will allow those coming in by train a quicker way to get to U de M and areas east and southeast of there faster and without going through downtown. It will also allow people at and near U de M a much faster, direct link to downtown, taking some pressure off the two legs of the Orange Line which takes people around the mountain.

And I have to agree with the McGill station put-down as well. It’s just too close to Central Station already (about 5 blocks), and shutting the second-busiest metro station for entire summers just to connect a train line to it is a bit much.

Perhaps it’s a bit of irony: the deeper station makes the most sense, in part because it’s so much deeper.

The Gazette yesterday reported on the study, with a strange followup ridiculously suggesting that the AMT would stop sending trains to Central Station altogether (it quotes an AMT spokesperson who either is talking out of her ass or is being misunderstood).

7 thoughts on “About those two stations”