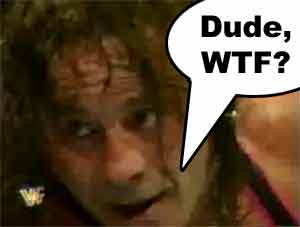 The Montreal Screwjob was 10 years ago today. That was the day the highly choreographed fake drama of professional wrestling took on a real-life fake drama backstage. (YouTube, naturally, has a clip)

Though it was a huge scandal at the time (it even has its own dedicated website), attempts to recreate it in wrestling storylines and otherwise capitalize on it for profit have probably lessened its significance.

Nevertheless, its star, Bret “The Hitman” Hart, has released an autobiography, and is doing interview tours promoting it. His timing couldn’t be better.

Like it or not, this is one of the greatest stories in Montreal’s search-engine-indexable lore.