Oh hey, did you hear they opened a new Apple store on Ste. Catherine Street downtown on Friday? I don’t think anyone noticed the opening event but me.

I started work at 6:30 on Friday, so I figured I’d stop by and see all the commotion around the new Apple Store on Ste. Catherine Street. It wasn’t the store itself I was interested in, as much as the crowd that gathered to worship it.

So many people showed up that a barricade had to be setup to the corner of Crescent Street and then at least halfway up the block toward de Maisonneuve. Even an hour after the store opened, the line continued around the block. 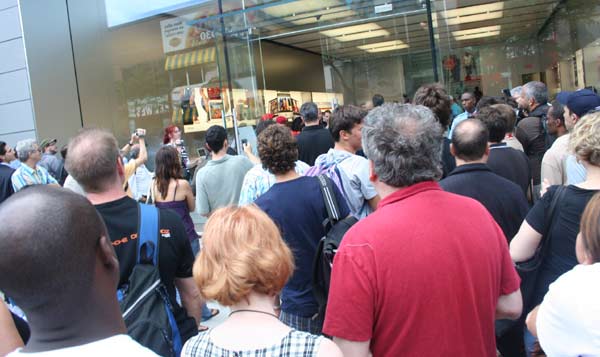 At 5pm (just moments after I arrived), the doors opened and people who had been waiting since as early as 7am got ushered in. 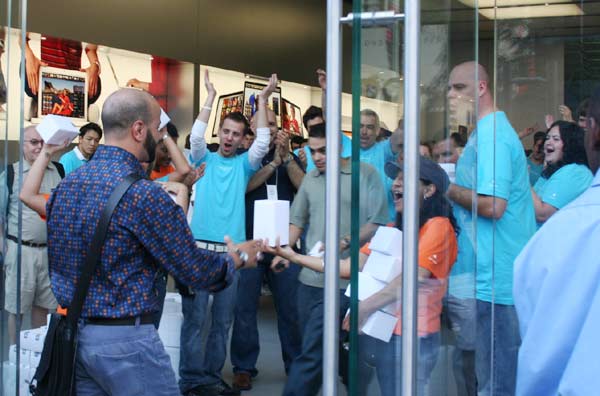 A customer is handed swag and cheered as he walks in

As each customer entered, they were handed swag (more on that below), and gleefully cheered at by over a dozen employees in blue and orange t-shirts. 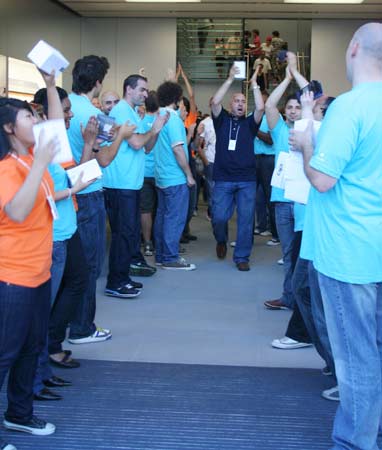 The group kept this up for thousands of customers over at least an hour, cheering for each of them as if … uhh … what would cause you to cheer enthusiastically for someone you’ve never met? 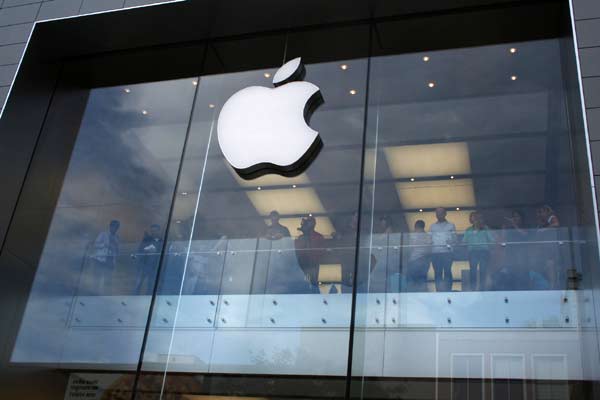 Well-wishers on the second floor

The second floor, which houses the genius bar among other things, was packed with people looking outside taking photos. Many of them are already on flickr. 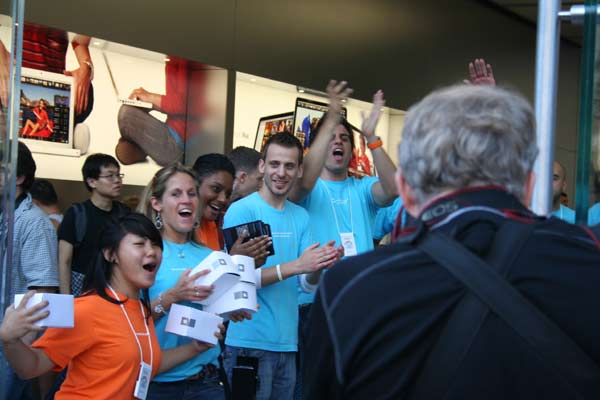 Gazette photographer Dave Sidaway takes a shot of the employees

The media were there in full force, taking pictures and doing interviews. Most came by earlier for a “pre-opening” exclusive to the media, but stuck around for the craziness. Gazette photographer Dave Sidaway put together a photo gallery. Reporter Roberto Rocha has a video.

I managed to capture a few of them on camera. Full points if you can recognize all five: 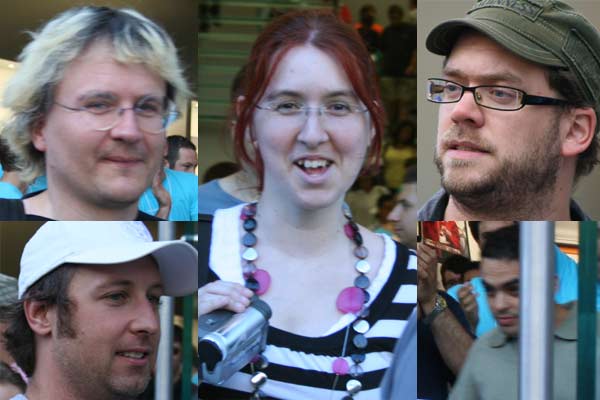 Perhaps the only thing more pathetic than the people waiting in line to go into a store were the people who came up with excuses on how to cut in line. Just about every excuse in the book came out. Some claimed they were just inside, others wanted to meet family members, or just go in for a second, or wanted special privileges because they were tired. Many just said they didn’t notice there was a huge line right behind them that snaked around the block. 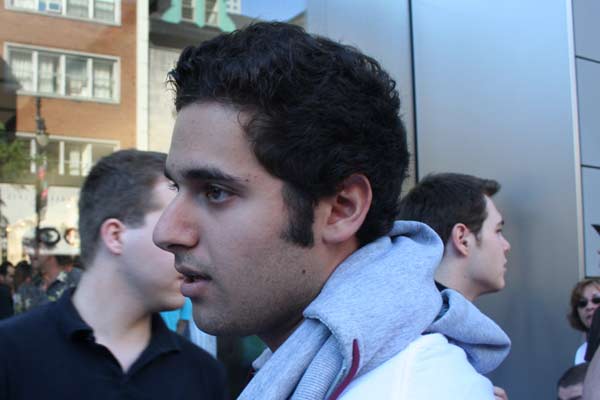 "I was just inside. I forgot to get a shirt"

This guy, for example, nearly assaulted the security guard to get in after his friend tried excuses of his own. His efforts failed. 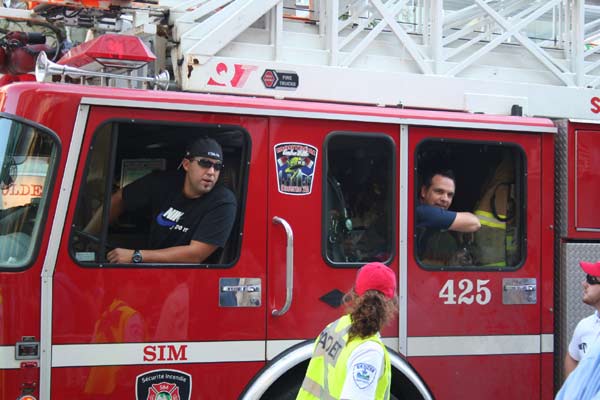 This fire truck happened by, and its occupants rubber-necked at the commotion. The driver happily obliged the store employees who urged him to give a celebratory honk. 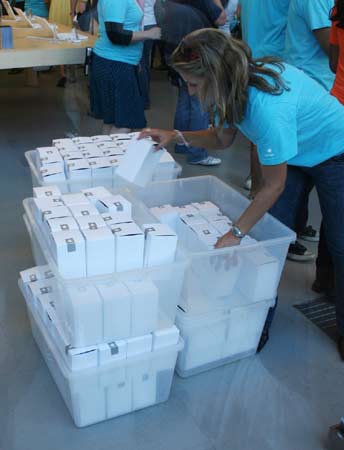 For the opening, the store rounded up 2,500 t-shirts, each in its individual Apple-branded box, to be given to the first 2,500 customers. A side-effect (whether intended or not) was that rumours abounded about what was in the boxes. Were they giving out iPhones? iPods? A rumour that they contained free iPod shuffles made the rounds, thanks to some devious rumour-spreading on my part. It seemed just plausible enough. 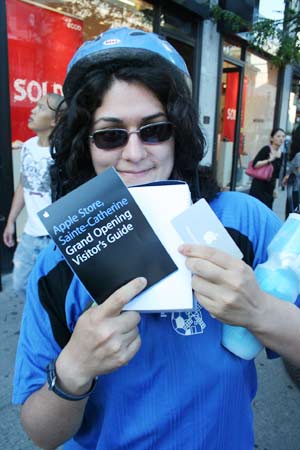 As my lovely assistant demonstrates, the swag was pretty standard fare. A one-size-fits-most t-shirt, a pamphlet, and some cards. 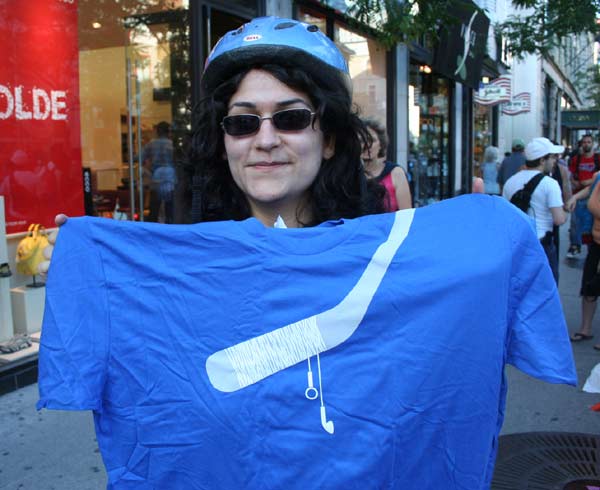 The t-shirt is blue, with a graphic of a hockey stick with iPod earphones wrapped around it. Someone apparently told Apple’s marketing department that we like hockey here.

On the back, near the collar, is some text reminding people of the event in question, so you can one day tell your grandkids about it. 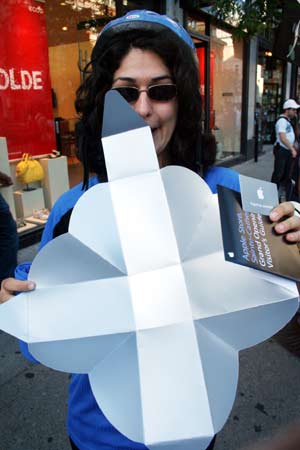 This is the box the t-shirt came in

The box the t-shirt came in (was a box really necessary here?) was folded in a funky way, which also made it cool because it was Apple. 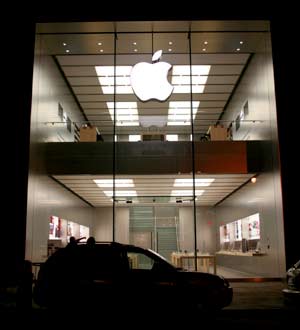 I went by after my shift ended late at night, and noticed that the store was extremely bright. Not only did that waste a lot of electricity, but it had a side-effect of attracting bugs: 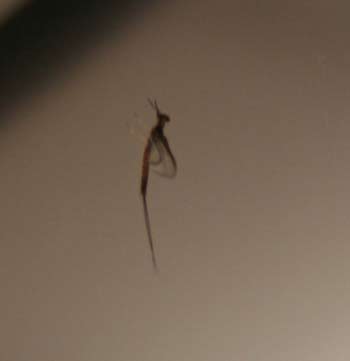 A bug on the Apple Store window at night

The bugs attached themselves to the outer window, apparently confusing the bright lights inside with the light of the sun and/or moon. 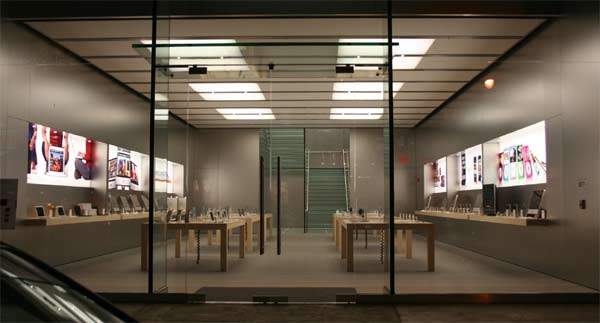 The empty Apple Store at night

It also presented my first opportunity to get a clear view inside. Computers and iPods on display, unsurprisingly. 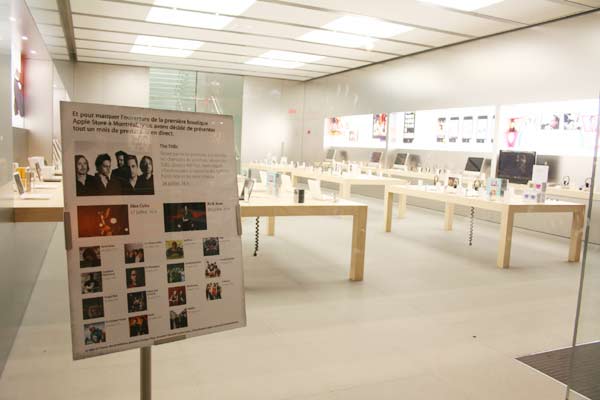 Upcoming events at the Apple Store

The store is ccelebrating by having über-cool artists come and play there. Anik Jean and David Usher are among those scheduled this week.