As if to underscore how unstable and disorganized our government is, there are two competing protests scheduled Saturday afternoon for and against the coalition government in different parts of the city. 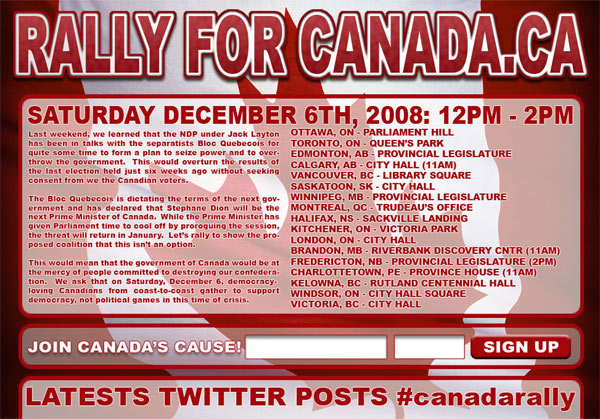 On the Rally for Canada website (which features “latests twitter posts”), the rallying point for the anti-coalition forces is listed as “Trudeau’s office”, which I assume means Justin Trudeau’s constituency office at 625 Faillon Street E.

But if you go there, you’ll probably be standing with a small crowd of gramatically-challenged Tory supporters. Everyone else is going to Complexe Guy Favreau on René-Lévesque Blvd. W., the federal building which for some reason has always been turned into Protest Central by anyone with anything to say to the federal government. That protest is the one the Liberals, the unions and the Make Parliament Work website are pointing people to. It also has over 500 people RSVPed on Facebook, which means at last five of them will show up.

Personally, I don’t think public protest is going to change anything here (is Stephen Harper going to give up power because some a few hundred Montrealers that wouldn’t have voted for him anyway told him to?). I also doubt most of the people attending these protests would have the same positions if the tables were turned and Stephen Harper was trying to use the Bloc to take power away from a minority Liberal government.

But hey, if you want to walk out in the cold carrying a sign, go nuts.