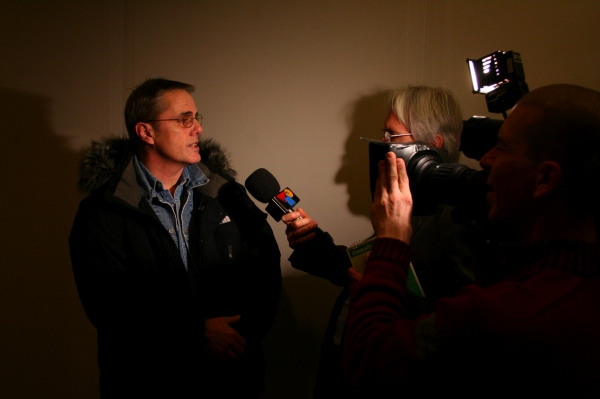 Scrums are a fact of life in the news media. An important event happens, and every news outlet is there to cover it. TV cameramen, print photographers and reporters huddle around an important figure and save time by essentially doing the same interview.

(Despite the continuing threat of convergence, each outlet still sends its own team to major events, even if a particular empire might be represented by more than one journalist.)

No one knows the news business better than those in it, but even many of us were surprised when the media gathered outside the room where the Montreal Newspaper Guild was holding meetings on whether to approve a new contract. 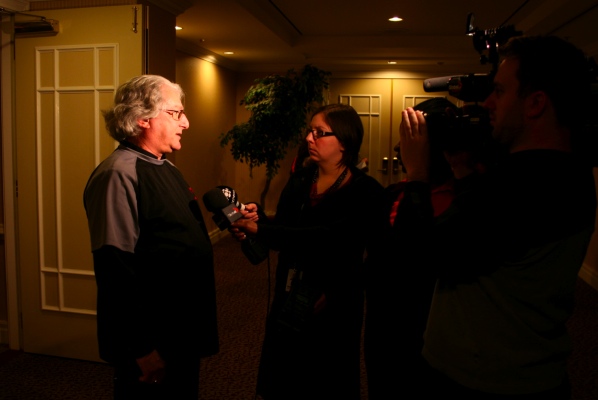 The union executive allowed the print and TV cameramen to come in before the meeting and take their B-roll before the doors were closed. The next time they would see us would be two hours later when we’d announce the result of the first vote.

And when that happened, many Gazette reporters went to the other side of the looking glass, giving their own interviews to the media (some to reporters they’ve casually chatted with for years at press conferences and media events).

Union vice-president Irwin Block (the highest ranked of editorial employees in the union) was the most visible face (and the most heard voice). Within hours he had given a phone interview to LCN and this morning he talked to CBC Daybreak. 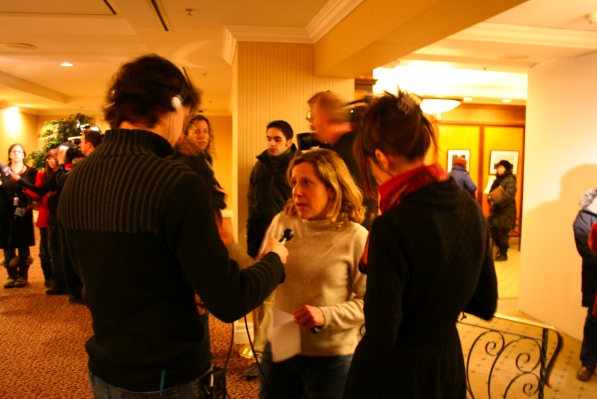 I was surprised to see so much media there, especially since nobody was there for the strike vote back in September. But the lockout at the Journal has intensified the discussion – many news stories combine both disputes together as if they’re the same – and they’re each getting more coverage because of the other. The prospect of two major Montreal newspapers (the largest ones for each language group) being hobbled by a lockout goes beyond inside baseball and into the kind of media news that could actually affect people. 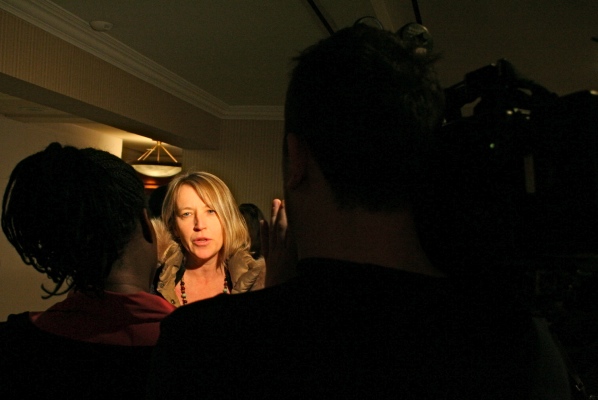 Although journalists try to cover everything objectively, and get reactions from both sides (The Gazette wasn’t talking on Sunday, but has since started explaining its side of the story), the camaraderie between journalists – even those working for competing media – means that they’ll subconsciously side with their colleagues. After all, many of them belong to unions too, and they’re just as scared about what media convergence and outsourcing will do to their jobs and journalism in general. 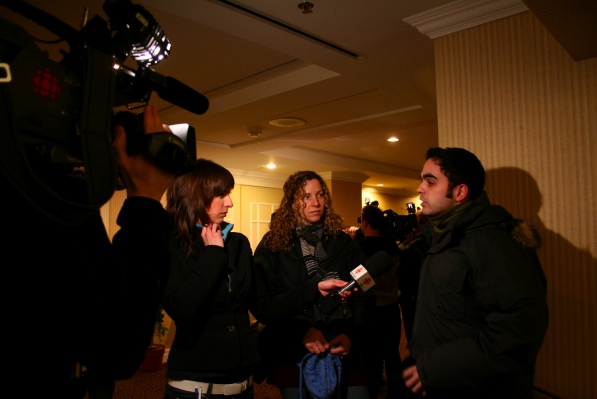 Both sides go back to the table on Wednesday.

One (extremely geeky) anecdote about Sunday’s meeting: I brought my laptop along in case there was an open WiFi at the Intercontinental Hotel. Turns out there was, but it required signing up and having a PIN from the front desk.

But as I tried to figure out how the system worked, my instant messaging program connected. Then, shortly thereafter, I started getting Twitter updates. But I couldn’t reach any websites.

It didn’t take me long to figure out that the system worked by blocking port 80 (HTTP) but leaving the rest open.

Of course, port 80 was the one I needed to access my blog and write a post with the vote results.

Eventually, I figured out that I could access my hosting provider’s administration panel, which operated on a nonstandard port. From there, I got into the database, and decided I’d do it manually – by adding a row to the database with the data filled in. Fortunately for me, WordPress’s database is fairly simple and self-explanatory. I only needed to fill out a few things to create a valid post.

I crossed my fingers that it would work (I had no way of verifying if it did), and sure enough it did. (I did more complicated stuff like tags and categories later when I got home).

3 thoughts on “The other side of the scrum”