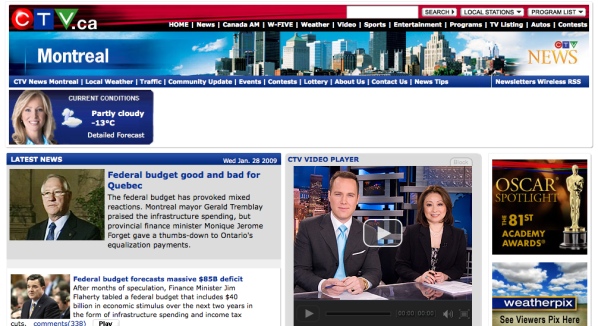 It’s not even that we made fun of CFCF’s website for how bad it was, how it looked like it hadn’t been redesigned since the 90s (actually, its last redesign was in 2004, but that wasn’t much better than its 90s look). It’s that it was so bad it was completely off the radar. You couldn’t link to news stories because there was no archival system for them. Forget Web 2.0, it wasn’t even Web 1.0.

Well, some of that’s changed now. CTV has rolled out new websites for all its local stations, including CFCF in Montreal. It includes crazy Web 1.0 features like having individual stories on their own pages, links to wire stories, and individual pages for special features. The weather page has actual graphics from the show and even an embedded video of the latest local forecast (which for some reason is done exclusively for the web instead of just taking video from the latest newscast). It’s even got an RSS feed, and the video player is improved (it’s embedded instead of being a popup).

Looking for crap? Well they have that too. The community calendar page and lotteries page both have that vintage 90s feel to them. The traffic page is nothing but links to Transport Quebec highway cameras.

If you’re expecting bleeding-edge features like the ability to comment on stories, sadly you’re out of luck. They point you to a contact form if you want to comment on a story. But they include handy Facebook and Digg links, so you can comment on the story on someone else’s website. There’s hints of a mobile site, but apparently that’s available for every local station except Montreal. 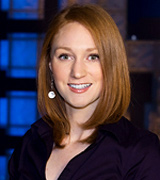 The About Us page includes bios of all the “personalities”, which now (finally) include Daniele Hamamdjian and Maya Johnson, as well as this Melissa Wheeler person, who I’m sure is doing the best she can with this antiquated technology. They also list important executives like Barry Wilson and Jed Kahane.

RadCan also rolled its new design into service recently. It’s apparently to spotlight audio and video (which, coincidentally, is what RadCan is all about), but the audio and video player is just as crappy as it was before, mainly because it’s still based on Windows Media instead of Flash.