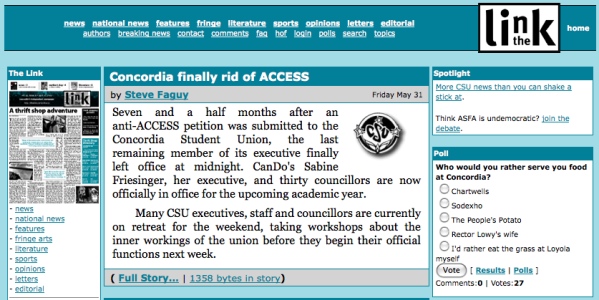 For some reason that completely eludes me now, I took a trip through the Wayback Machine this week to visit my first big website. It was for The Link, the better of Concordia University’s two student newspapers (at least while I worked there). And sadly, it’s a website that no longer exists except in the form of a few snapshots in the Internet Archive.

Having been appointed to the position of webmaster for a newspaper that didn’t have a website, it became pretty clear what my first job would be. During the summer of 2001 I embarked on a project to create a server and install a content management system on it that would be suitable for newspaper articles.

The first part wasn’t too complicated: a generic desktop server with Slackware Linux installed on it, a few tweaks, and the server was up.

The CMS was a different story. This was two years before WordPress. Months before the first MovableType. After minutes of searching, I figured my best option would be to use Slashcode, the Perl-based engine behind the popular Slashdot. (Hey, remember Slashdot? Apparently it’s still there.)

In hindsight, it was a horrible mistake. At the time (and I suspect this is still the case) it was an awful, inelegant piece of hacked-together software, built from scratch to support Slashdot and awkwardly patched with new features. That meant changing things very difficult.

Among the annoyances that only grew over time:

But for its faults, the system also had many useful features, some of which were ahead of their time:

For about five years, the website ran on Slash, frustrating webmaster after webmaster, until a database crash in the summer of 2006 forced them to switch to a new system. By then, thankfully, technology had progressed to the point where more elegant solutions were available.

Still, it’s a shame the archives have disappeared.

You can see what the website looked like a few months after launch in 2001, a few months later after a redesign, and in 2004 before I ended my tenure as an editor.