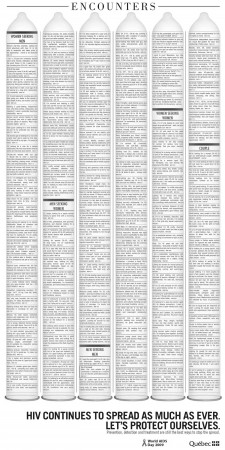 Ad from Tuesday Gazette's Page A5 (click for full image)

On Tuesday, for World AIDS Day, a full-page ad appeared in the Gazette that was designed to catch attention and promote safe sex. On the background of six really long condoms were over 200 fake personal classified ads, some flirty but others raunchy or crude, promoting anonymous sex but also safe sex. Many mentioned condoms being a must, or made vague references to cleanliness and “safe”-ness. 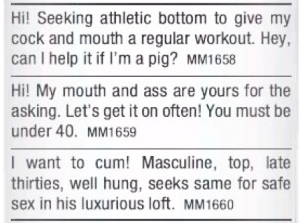 Three of the more ... graphic of the ads

Although AIDS awareness campaigns are almost always designed to shock with this kind of crudeness, having it right up front of the A section of a newspaper was a bit much for some readers, who have sent in letters to complain, particularly about the unmangled use of F-words:”long fucks”, “seeks fuckfriend”, “gang bangs”, “want to fuck now and again”, “meal & fuck session over the holidays”, “fuckfest”, etc.

You had to scan a while to find the first one, and they’re in the minority, but you can imagine some underage children having a few giggles (and scratching their heads).

Was it too much? Should the ad have been partially censored? Or is our collective Victorian attitude toward sex a small price ot pay to prevent people from getting a horrible disease? (One might argue that people’s naive delusions about sex are part of the problems AIDS battlers face.)

For me, I’m just impressed the creators of this ad came up with over 200 fake classifieds without repeating them.

23 thoughts on “Do fuckfriends offend you?”