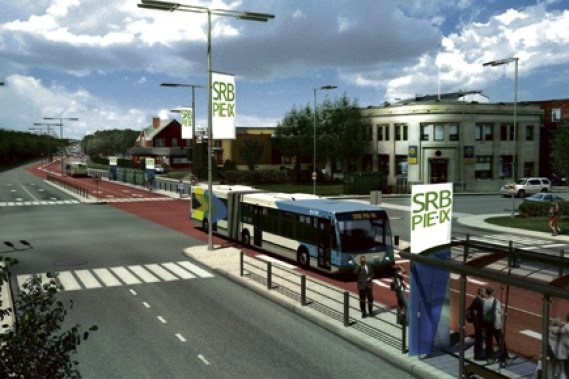 La Presse has another one of their “Exclusif”s, which sounds like hard-hitting investigative journalism but is really just being tipped off to a press conference ahead of schedule.

This one reports that the city is going to announce the building of a dedicated transit corridor in the middle of Pie IX Blvd. This would replace the contra-flow rush-hour reserved bus lanes that were shut down in 2002 after they were deemed unsafe for pedestrians (and left shelters in the middle of the road vacant since).

A median between the transit corridor and the traffic lanes would be built between 2011 and 2013. And it would go up to the end of the island, eventually being extended into Laval.

This is a good idea. It’s safer than the old contraflow system, and it encourages quick public transit. And though the article makes no mention of tramways, the corridor could be more easily converted into a tram line once it’s setup. Pie-IX is one of the routes being considered for a tramway (long ago, it was even considered for a metro line, to the point where it appeared as a dotted line on metro maps).

I like transit corridors or transitways, roads that are reserved 24/7 strictly for use by public transit (essentially buses). They seemed to work well when I went through them in Ottawa. So why don’t we have more of them here? 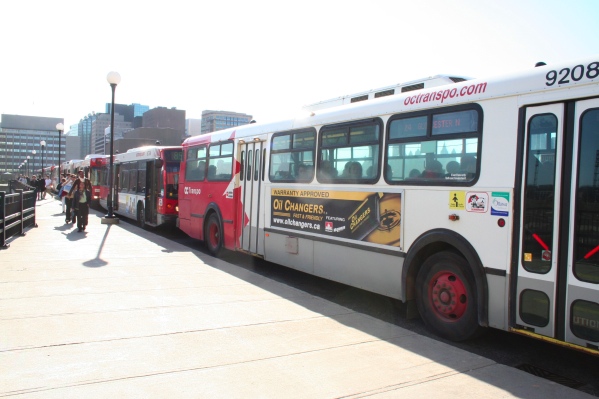 Bus-only roads are good enough for Ottawa. Why not here?

I ask this question because transitways are a good middle ground between reserved bus lanes and tramways. If we’re planning on building tramways on Côte des Neiges Rd. and Park Ave., reserving lanes in both direction 24/7, then why aren’t we doing that already for buses? Why not build the median and setup a transitway that can be replaced by a tramway later?

This could also help test the waters before plunking down serious cash for a tram line that nobody might use. Like Mayor Tremblay’s plan for a loop going from downtown to the Old Port. The city setup a bus along the route – the 515 – which has been a huge disappointment in terms of ridership. Tremblay still thinks a tram here is a good idea, despite the evidence to the contrary. Setting up a transitway along this route would remove any lingering doubts about whether traffic is the reason people aren’t taking a liking to public transit here.

It just seems like a no-brainer to me: if you’re going to take that parking away and reserve space for public transit, don’t wait until the tramway is built and just give the space full-time to buses already.

So why isn’t anyone else considering it?

UPDATE: La Presse says a simple reserved bus lane would cost a third the price. But, of course, it wouldn’t be as efficient.

UPDATE (Dec. 29): The MTQ has posted the “fiche technique” of the proposal for Pie-IX (PDF). Bus stops would be after intersections, and the bus lanes would narrow to make room for the boarding platform (or, conversely, would widen when buses leave the platform and travel at a faster speed).

44 thoughts on “Transitways before tramways”