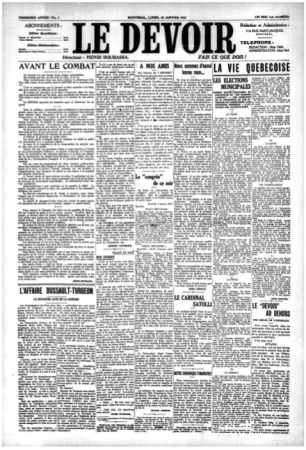 100 years ago today, Henri Bourassa published the first issue of a newspaper he somewhat arrogantly called Le Devoir. It was a different time then, both in terms of technology (there was no concept of desktop publishing as there is now) and in terms of politics (the paper was nationalist, but that meant they wanted independence from London, not Ottawa).

Despite nearly failing many times (see a full chronology and another piece focusing on finances), the paper survives. And it’s celebrating. It has an entire section on its website devoted to 100th anniversary stories, and has put its special commemorative magazine online for free in “virtual paper” and PDF formats.

They’re planning on milking this for the entire calendar year, with special events and publications. It starts today, when they’re inviting readers to meet the paper’s artisans at Marché Bonsecours, from 10am to 1pm. There will also be a special presentation and a commemorative envelope (they do those?) issued to honour the anniversary.

Le Devoir isn’t the only one celebrating. Among the celebrations from other media:

Allow me to add on: Happy anniversary. Try to stay out of bankruptcy for another century.