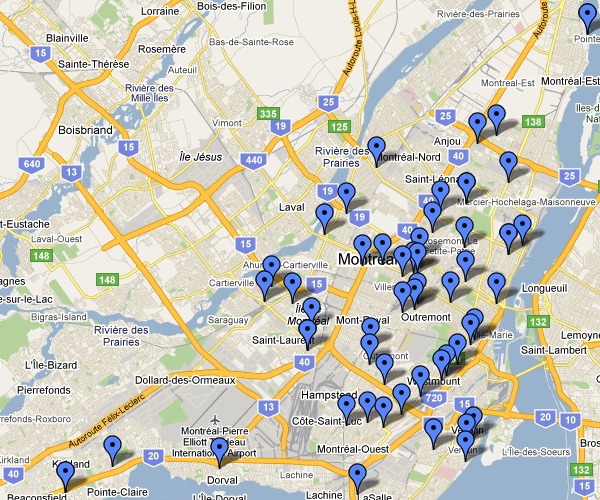 This map notes some of the locations of something that used to be all over the city but no longer exists.

UPDATE: A bunch of you guessed correctly: These are Steinberg’s store locations on the island.

For those new to the city or too young to remember, Steinberg’s (later without the apostrophe-S) was Quebec’s first and largest supermarket throughout most of the 20th century. Based in Montreal, it expanded throughout the city and then throughout the province and into eastern Ontario as well. But financial pressures led to its decline in the 1980s and by 1992 they had all disappeared.

Their memory is kept alive on Flickr’s Ghosts of Steinberg account, which collects photos of former Steinberg locations. It’s explained by Chris DeWolf on Spacing Montreal in 2008.

You can check out my map (locations taken from Ghosts of Steinberg and a few other locations) on Google Maps here.

19 thoughts on “Montreal Geography Trivia No. 67”