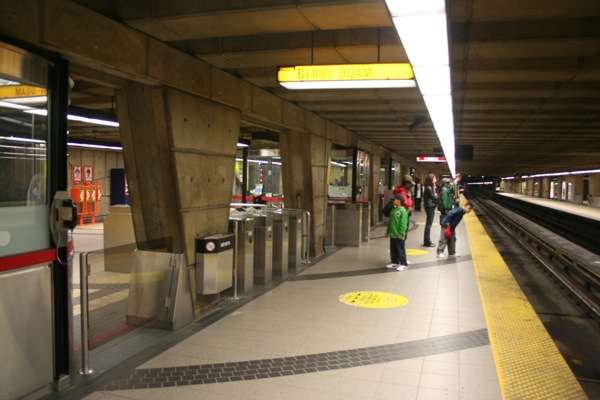 This morning, apparently, the Montreal Metropolitan Community (which coordinates issues affecting Montreal and its suburbs) decided that, beginning in July, the Longueuil metro station would be subjected to the same fare rules as those in Laval: Montreal passes would not be accepted, and users would instead need a TRAM 3 multi-zone pass to enter the station.

The news came out not through the STM or the MMC, but via Longueuil mayor Caroline St-Hilaire, who sent out a press release expressing her outrage:

This led to stories at Radio-Canada, Cyberpresse and Rue Frontenac, which follow the narrative St-Hilaire has created. Metro goes a bit further, adding that about a quarter of people who use the Longueuil metro use the $70 CAM instead of the $111 TRAM 3. (UPDATE: The STM’s Odile Paradis says it’s more like 15% of users, or 3,000 to 4,000 people.) The TRAM 3 gives access to the Réseau de transport de Longueuil bus network and the Agence métropolitaine de transport’s commuter trains in Longueuil.

Why this change? Well, it makes sense, especially considering what’s going on in Laval. The AMT has established zones for transit that crosses into multiple territories, and Longueuil is clearly in Zone 3. The fact that it accepts CAMs just like the rest of the STM network is more historical than anything. That’s just the way it’s been.

Even St-Hilaire accepted, it seems, that this would eventually change after 2011. But she’s mad that Montreal and the STM appear to have gone back on their word and is doing this ahead of schedule.

(The Parti Québécois, meanwhile, jumps on an opportunity to pander to suburban voters and demands that government step in to not only reverse the decision but to reduce the fares for Laval users as well.)

This is happening, St-Hilaire says, because of Laval mayor Gilles Vaillancourt, who is refusing to pay for Laval’s share of the taxpayer cost of the metro because he feels his city is being discriminated against. So he decided to take the transit system hostage until Montreal acquiesced to his demand that Longueuil be treated the same as the Laval stations.

Ironically, while this decision would theoretically mean that Laval will start paying its share, the release also says that Longueuil will refuse to pay its share for the metro until further notice.

Vaillancourt, meanwhile, says his city will now start paying its share of the STM’s metro deficit, but it won’t pay retroactively for the years that Laval paid more and Longueuil paid less.

This is absolutely ridiculous. These mayors are all acting like children, and apparently no adult is either able or willing to step in. Instead of suing Laval so the city lives up to its contract, or having the provincial government step in and order them to respect their agreement, everyone is acting as if Vaillancourt has a legitimate bargaining chip in his hand and is bending over.

Can I start refusing to hand over tax money until I get free pizza delivered to my apartment?

If St-Hilaire is right and there is an agreement until 2011, then the decision should be overturned and postponed until then. But requiring a TRAM 3 pass at Longueuil just makes sense.

The people who will be affected by the change are people who don’t use the RTL bus network, either because they live near the metro station (a tiny minority) or because they drive to it in their cars. We’re talking about 3-4,000 people, including those who park in the 2,370 parking spaces outside the Longueuil metro. And to park there, they have to pay about $100 a month in parking fees. In other words, if they’re taking the bus from home and using a TRAM 3, they will pay significantly less ($111) than they did parking at the Longueuil metro and using a CAM to get into the station ($170). Less convenient, but cheaper.

Perhaps there’s a group of people I haven’t considered who would be driven into bankruptcy by this decision, but I can’t imagine they will be a large number.

Of course, St-Hilaire loses nothing by taking the stand she takes. Longueuil people like to use their cars, and they like not having to pay for things if they can get away with it. Just like everyone else.

It’s time for Longueuil to realize that it is a suburb, and transit is more expensive there because of that. And it’s time for politicians in all three cities to realize that holding your breath and screaming “NO NO NO!” is not a valid negotiation tactic.

At least, I desperately hope it’s not.

UPDATE (Feb. 5): Nathalie Collard of La Presse agrees that this is silly, as does Projet Montréal, which suggests reducing the number of trains going to Laval and Longueuil.

La Presse also has a vox pop on the subject, and you can imagine what the opinion of the populace is.

62 thoughts on “TRAM 3 at Longueuil: Right decision for the wrong reason”