Astral Media, the company that has interests in cable channels, advertising, radio and a bunch of other stuff, has changed its logo.

Logo changes are a fact of life, as companies realize that they’ve gotten old and boring and need some hip new way to stay in touch with people, like adding colours and going all-lowercase. They find a designer who whips out the Pantone booklet and gets to work on something abstract that will eventually get shot down by a committee until, 12 months later, a mediocre logo that doesn’t mean anything and therefore doesn’t offend anyone gets tacit support from the corporation and is released to the public.

Astral’s new logo replaces a stylized “A” with … another stylized “A” (but lowercase). According to the press release, the new logo “represents the company’s diverse assets, decentralized yet disciplined business model and the knowledge, passion and imagination its employees bring to the marketplace.”

I think it represents the fact that the only thing a logo maker can think of when it comes to Astral is that it starts with the letter “A”. But then, most corporate logos are just stylized letters anyway, although most aren’t quite so phallic.

My favourite part of the release comes right after that quote:

The vibrant colour palette and creative shape of the new logo are designed to convey human warmth and emotion, within a defined and responsive structure that is grounded and resilient.

Astral is prepared to show human emotion, but only within a defined structure. If it wasn’t obvious how big and corporate Astral Media has gotten, this should make it clear that it has nothing to do with the logo.

This video of an old white guy emotionlessly reading a statement filled with marketingese should accentuate that point.

Remember, these are the guys who own CHOM and Virgin Radio in Montreal. 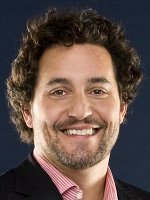 Alain Bergeron: Out the door already

The redesign was apparently the work of this guy, VP and Chief Marketing Officer Alain Bergeron. Astral announced shortly after the new logo that Bergeron was leaving the company (supposedly he stuck around just long enough to launch the new brand identity).

The change has gotten some ink … err, pixels, in the mediawatchosphere, like this piece form Trente. But there has also been some criticism, one calling it “a weird mess”, people on Twitter expressing even worse criticisms, and one even putting money behind a contest to design a new logo. It’s gotten so bad we’re starting to see a backlash backlash, serious analysis of the larger issue and parody on the radio.

Astral Media (now just “Astral”) is a private company and it can burn whatever cash it wants, even while it fires a bunch of front-line people and cuts hours of local programming at its radio stations to replace it with cheap syndicated crap.

But Astral has little brand recognition among the public. And there’s nothing wrong with that. People don’t go to the grocery store and buy Astral cereal. They don’t subscribe to Astral cable. They don’t turn on the TV or radio and switch it to the Astral channel. They go to Canal Vie, and VRAK.TV, and CHOM and Rock Détente. Astral’s properties have their own branding, why should the parent company care what anyone thinks of its logo?

Maybe I’m missing something, but my gut tells me if Astral thinks this change will do anything more than force them to throw away a bunch of old business cards and letterhead (and signs), they’re dreaming in Technicolor.