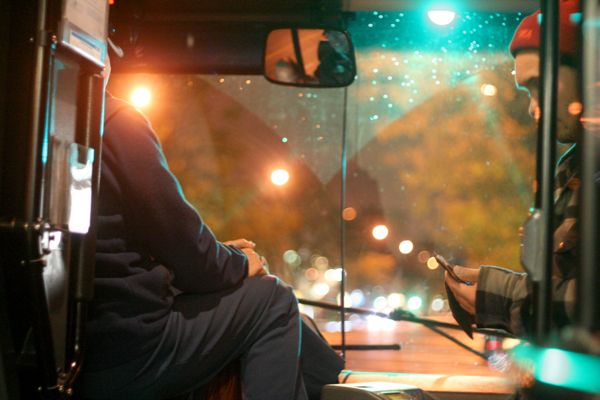 A woman sits on the bus driver's armrest greeting passengers

Maybe I’m being a bit of a prude, and insufficiently open-minded. And I know it can get boring when you’re driving a bus late at night.

But it just seems somewhat … inappropriate to have someone sitting with you in the driver’s seat as you’re driving the bus. Not only does it look rather unprofessional when people start to board the bus, but I’m pretty sure the people who tested the bus for safety don’t recommend people sit there.

There’s a seat right by the front door, and at this particular moment it’s unoccupied. Maybe you can sit there instead. Don’t worry, your conversation shouldn’t suffer.

UPDATE (Oct. 2): After having a similar experience – this time with children – Gazette reporter Anne Sutherland has written a story about bus driver behaviour, which appeared on Page A3 of Saturday’s paper: 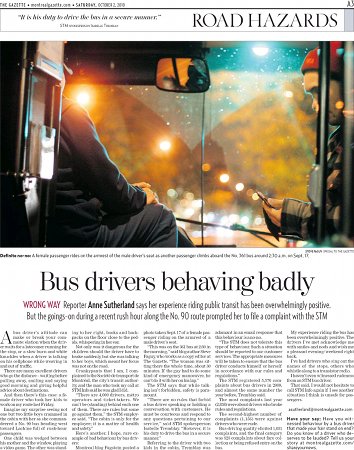 The photo becomes officially my first freelance photo for The Gazette. Of course, had I known that would happen when I took it, I would have tried to make it a lot better (and taken it at a higher resolution). 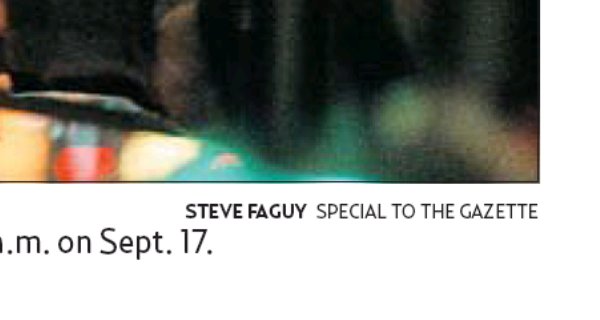 The story also quotes me briefly about my experience:

Here’s another, I hope, rare example of bad behaviour by bus drivers:

Montreal blog Fagstein posted a photo taken Sept. 17 of a female passenger riding on the armrest of a male driver’s seat.

“This was on the 361 bus at 2:30 in the morning,” said blog author Steve Faguy, who works as a copy editor at The Gazette. “The woman was sitting there the whole time, about 30 minutes. If the guy had to do some kind of emergency manoeuvre, he can’t do it with her on his lap.”

New media is awesome and all, and I work at the Gazette and put together a bunch of pages every day, but there’s still something about seeing a piece of paper with my name on it delivered to over a hundred thousand households that makes me a bit giddy. Running my first photo about a third of a page (I’ve cropped out the ads) on A3 of the Saturday paper ads icing to the cake.