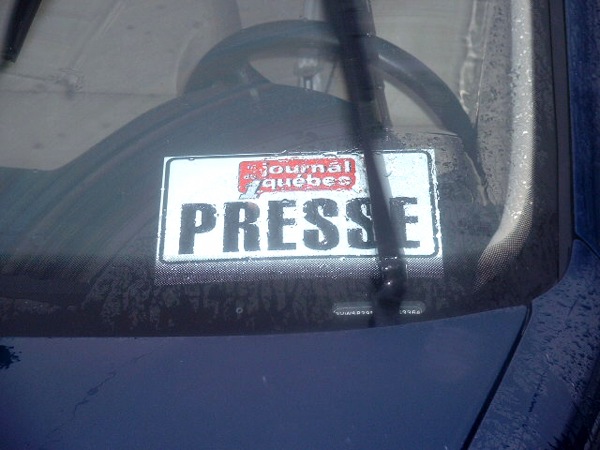 It's not always so easy distinguishing journalists from the rest

At its general assembly on Nov. 28, the Fédération profesionnelle des journalistes du Québec will be debating a series of motions recommended by the organization’s executive committee. Among them is a demand for a parliamentary commission into the Journal de Montréal lockout, an update to its ethics guidelines to reflect the development of social media (a subject I’ve been invited to speak about at a panel discussion the day before), and a bill of rights for freelancers.

These things sound pretty good (though the wording of the demand for a parliamentary commission sounds like its goal is to get the government to publicly embarrass Quebecor and come down against the creation of the QMI Agency news service).

There’s also a motion to expand the definition of “Quebec”, as silly as that sounds, to include those media organizations that “étant établie au Canada, entretient avec le Québec des liens historiques et culturels“, which sounds a lot like they’ll accept francophone journalists from just about anywhere in Canada. I’m not necessarily against this, but it opens up a can of worms (will the FPJQ now have to deal with the Ontario and New Brunswick governments?) and reinforces the idea that there’s a French mediasphere and an English one, and the FPJQ is on the French side.

But the motion that really bothers me is a proposal to setup a certification system for journalists.

The genesis for this idea appears to have come out of a survey the FPJQ did of journalists, in which they expressed concern for the quality of journalism that’s being done these days, concern that the line between journalists and non-journalists is fading, and a wish that everyone who considers themselves a journalist should be subject to the same ethics codes.

The solution, the FPJQ has suggested, should be the creation of a title called “journaliste professionel” which can only be bestowed upon real journalists who make their living doing journalism. And since having the government decide who can be a journalist is an attack on basic constitutional freedom, they’d rather an independent third party do this instead. For reasons of practicality, they’ve suggested … the FPJQ.

I don’t want to sound alarmist, but some of the implications of this are downright scary.

In researching this idea, I tried to look for other places where such a system is in place or has been proposed. Lots of third-world countries have tried this, leading to rebukes from journalist organizations who quite rightly complain that this could easily lead to governments suppressing undesirable reporting.

Recently, a Michigan state senator suggested creating a registration system that would bestow the title upon those who had a journalism degree, a minimum amount of experience and who were employed at a recognized news outlet. The idea was quickly shot down by those who say it’s an attack on the first amendment right to freedom of speech.

It’s not just governments that have suggested this though. The president of the Society of Professional Journalists suggested such a system in 2007. Others have come forward with the idea as a way of differentiating real journalists from biased blowhards. If lawyers can require licenses, why not journalists? If meteorologists can have a voluntary certification system, why not general assignment reporters?

One country that has already setup such a system is Belgium, and the FPJQ has invited Martine Simonis of their journalists’ union to speak about her experiences there since a law recognizing “professional journalists” was created in 1963.

Like in the Michigan case above, the title requires employment at a media outlet, a certain amount of experience, an age floor (21), a requirement to abide by ethics rules and a prohibition against working in communications.

Perhaps I should wait until Simonis speaks, but I don’t know if a system in a country that has a national collective agreement for journalists would work here.

The FPJQ motion is particularly vague on the specifics. How would this system work? Would it be based on the Belgian system? How does someone get accredited? How do they get de-accredited?

Most importantly, what advantages come with being accredited that non-professional journalists will be denied? My research into the Belgian system shows that it’s not much. Discounts on travel, more parking privileges, a photo ID card and the added access that comes with it.

Seems kind of minor for all the work involved in registering.

For clues, I went to a document prepared by the FPJQ in 2002, the last time this was brought up. There we have a bit more specifics on what an accredited journalist would get as far as perks: 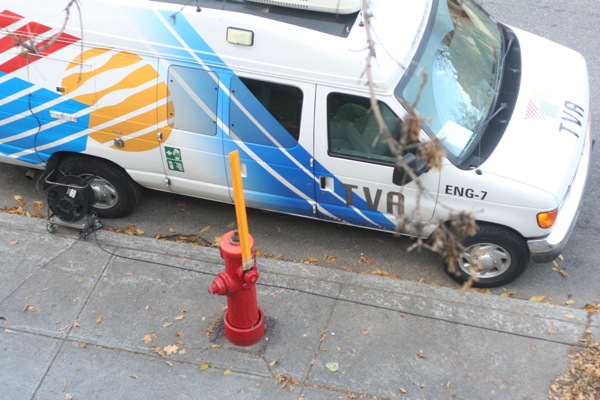 Free parking next to fire hydrants: Another perk of professional journalists?

And how do we determine who is a journalist anyway? Sure, a general assignment reporter for a major newspaper qualifies. But what about:

(I ask these questions rhetorically, but I’m actually interested in what people think. Feel free to give a yes or no to all the above in the comments.) 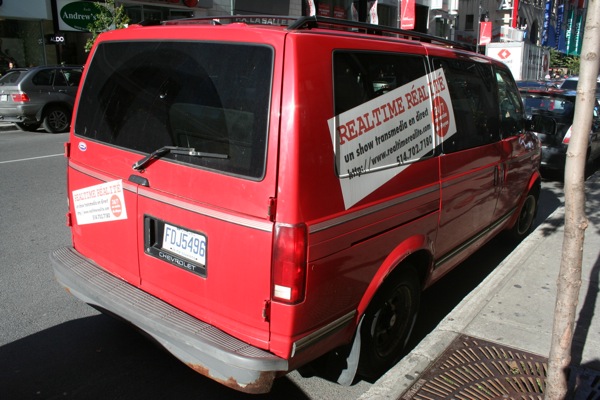 These issues aren’t minor points of clarification, they go to the heart of the issue. Journalism comes in far more forms than it used to, and not everyone fits the cliché. Define too narrowly, and you exclude a lot of people who are contributing to journalism. Define too broadly, and anyone can call herself a journalist and the accreditation holds no meaning.

Even if you could solve all the above, there’s the giant question of enforcement. What happens when a journalist fails to live up to the ethical code? They could get stripped of their title, but still keep their job. Are they not “professional journalists” anymore?

The Quebec Press Council already tries to separate serious journalism from the rest. Membership in the council is voluntary, and it has no power to enforce its decisions, but mainstream news organizations become members and pay fees because it gives an added layer of credibility to their work. And it saves them from having to hire an ombudsman.

But the council has been losing members recently. Quebec broadcasters like RDS argued that because they already have to deal with the Canadian Broadcast Standards Council they shouldn’t have to belong to a separate oversight body. And Quebecor decided its publications shouldn’t have to answer to a third party which it felt was biased against them. They’ve even threatened to sue if the council continues to make judgments against Quebecor’s publications.

If Quebecor can’t agree to be part of the press council, does anyone seriously believe it would accept this “professional journalist” certification proposed (and administered) by an organization it has all but dismissed as being controlled by unionists?

And if Quebecor rejects this certification, it becomes practically useless as a way of separating serious journalists from non-serious ones.

Another body that has to set rules defining journalists is the Quebec press gallery, which covers the National Assembly. And again, it has run into problems with Quebecor, denying membership to two journalists from the Journal de Québec because they would replace locked-out journalists from the Journal de Montréal. Would a journalist accreditation body act similarly to deny this title to those who act against union interests? The FPJQ hasn’t supported the press gallery’s move to exclude these journalists, but it hasn’t exactly taken Quebecor’s side in debates about journalism either.

These issues, the definitional problems, the slippery slope of rights to freedom of expression, the need for an oversight body that wasn’t needed before, and the probable non-participation of some news organizations, might be worth tackling if there were serious benefits to journalist certification.

But even the arguments made in favour of this move have problems: 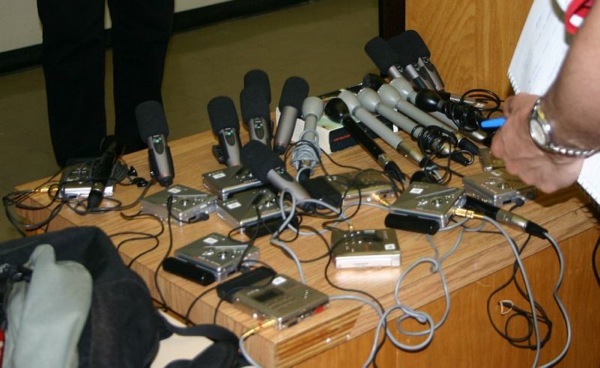 Everyone wants to be a journalist, but sometimes there need to be limits

There are situations where some person or body has to make the distinction between a journalist and a non-journalist. These are situations of scarcity and aren’t codified in law. Government press galleries decide on their own membership (which has caused problems in the past), but anyone is welcome to report on the government’s activities. Entertainment event producers give free passes and previews to journalists to raise the profiles of their shows, but have to be discriminating so they don’t give free passes to everyone who just doesn’t want to pay to see a show. Professional sports leagues also give special privileges to journalists that require them to make a judgment call.

But in most matters, anyone can be a journalist. Anyone can find out information, talk to people about it and publish what they find. And a lot of people do. Massive amounts of journalism are produced every day without anyone needing to be certified to do it.

Journalists are kidding themselves if they think having a card that says “PRESS” on it is going to make them more trusted among the public. Accreditation no more helps journalists than it does police officers, lawyers or doctors. Trust is earned, and can’t be simply handed out in card form. Some journalists have trust bestowed upon them because they’re hired by reputable organizations, but that reputation has been built up over time. Consumers judge whether to trust a journalist or news outlet based on their records, whether they’ve been fair and honest in the past, and how much original reporting they produce. One that’s deemed untrustworthy based on its record isn’t going to be able to save itself by waving that “professional journalist” card in anyone’s face.

Journalism has worked out just fine for centuries without needing an accreditation system. It has problems, mostly related to the amount of trust that society puts in the profession. This poorly-thought-out idea doesn’t solve those problems, and I would argue only makes the situation worse.

Unless the FPJQ can make a really convincing case next weekend, I see no value in this proposition.

UPDATE: A study group looking into the state of journalism in Quebec has produced some (really long) research papers into this issue, looking particularly at the historical context here and elsewhere. You can read Richard E. Langelier’s report from March about the debate here (PDF) and his look at the situation in France an Belgium here (PDF).

UPDATE (Dec. 6): Rue Frontenac’s Jean-François Codère has some thoughts on how public financing for professional journalists could be justified, and later takes on right-wing pundit Eric Duhaime’s criticisms of his thoughts.

UPDATE (Dec. 14): Some more from the FPJQ conference, including a video of people’s opinions and PDFs of the slide presentation and speech by Belgium’s Simonis.

18 thoughts on “Show me your paper’s papers”