As the holiday season approaches, La Presse is doing their annual thing and putting its vedettes up for rent in an auction.

The lots are familiar to those who have witnessed this stunt the past few years: Yves Boisvert, Serge Chapleau, Marie-Claude Lortie and others propose some activity related to their specialty. Patrick Lagacé also offers to let you shadow him for a day, but he’ll let just about anyone spend time with him for free.

And Paul Journet, despite coming in dead last in 2009, is willing to put his pride on the line again, proposing a trip to the golf course. 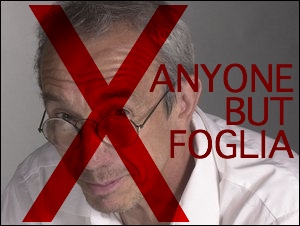 I’m sad to say that I won’t be able to revive my Anyone But Foglia campaign this year since the star columnist doesn’t feature among the 11 lots. This is most unfortunate, because we cannot defeat him if he doesn’t participate. It’s like going to the Stanley Cup final and the other team forfeits. That’s not fun at all.

So who can we use our money to defeat this time? Alain de Repentigny came in second last year, and this year is offering the upcoming U2 concert, which is pretty enticing.

Or maybe we can just use our money for good instead of evil. Put it all on Paul Journet. Make his Christmas a happy one for once.

Radio-Canada is also doing a similar event, auctioning off cool people and/or cool things, including some time with Joyce Napier and Michel C. Auger, or an autographed Canadiens jersey. Or you can go winter biking with Emmanuel Bilodeau.

The choice is yours. But this is the one time during the year that you can help some needy people and give journalists a rare indication that people actually care about them.

We’ll take your spare change too

If the auctions are a bit too expensive for you, the Grande Guignolée des médias is coming on Dec. 2. And, of course, there’s always the Gazette Christmas Fund, which is bombarding you with stories of the people it’s helping until you either open your wallets or acknowledge that your heart is dead and that little bit of soul left in you has long ago bitten the dust.