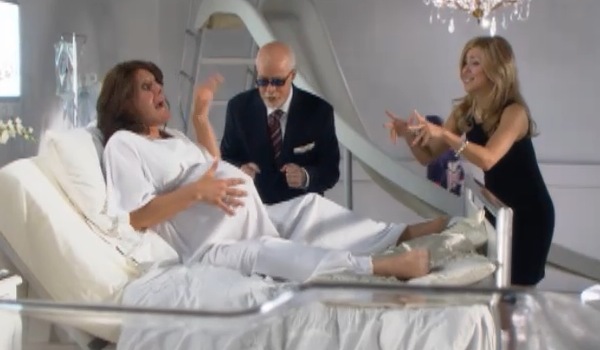 This parody of Céline Dion and Julie Snyder: Funniest segment of the night, or mean-spirited attack on Quebecor? In this case, funny is in the eye of your employer

It’s tradition in Quebec media to review each year’s end-of-year special from Radio-Canada, the Bye-Bye. It went a bit crazy two years ago when Véronique Cloutier and Louis Morissette decided to take their first crack at it. So much so that there wasn’t one to end 2009.

So you can imagine how much everyone was anxious to see what would happen when Cloutier and Morissette decided they would throw themselves into the gauntlet again and host the Bye-Bye 2010.

I watched it, along with my family, on New Year’s Eve, and followed the reaction live on Twitter. My first thoughts were that it was pretty impressive, that they weren’t overcompensating by pulling their punches compared to 2008, and that it wasn’t likely to offend anyone … or at least, no one not working for Quebecor.

The consensus was that the production values were good (particularly makeup and prosthetics, which in some cases made the actors barely recognizable as themselves and instantly recognizable as their targets), the parodies were well done, and the music videos were great, but the jokes fell flat, which is kind of the most important part.

The first professional reviews came quickly afterward (Richard Therrien’s was up in less than an hour). But many others waited because they were to go in newspapers, and many of them published neither on New Year’s Day nor on Sundays. It would be more than 48 hours before some people would read anything about it.

Here are some of the reviews that came out:

Of course, none of these really mattered. What mattered was the review of Michelle Coudé-Lord, the arts editor at the Journal de Montréal. 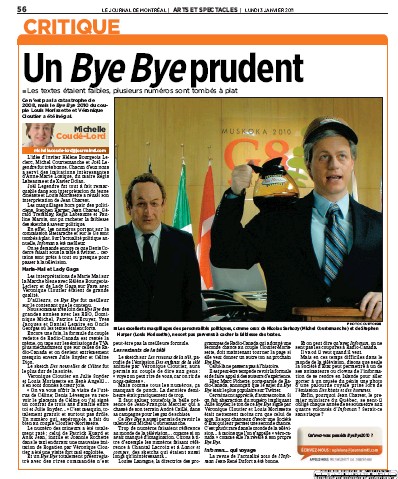 From the Journal de Montréal for Jan. 3

The headline on Monday morning was “Un Bye-Bye prudent“, which was a positive sign. It began with some compliments toward the show and its hosts. But then, as if on cue, Coudé-Lord took issue with them making fun of TVA for reasons that I’m sure are entirely unrelated to the fact that Quebecor owns TVA and the Journal de Montréal:

The next day in the Journal de Québec, Jean-Jacques Samson went one step further, taking issue not only with the Céline Dion/Julie Snyder parody but with Jean-François Mercier making comments about shale gas exploration. To many people, these were among the funniest parts of the night, but to him it was unacceptable vulgarity, apparently all part of a Radio-Canada conspiracy to use our tax money to attack the right wing of Quebec society.

I have to admit, my reaction watching the show for the first time was that it did take a lot more shots at TVA shows than those of Radio-Canada (the fact that it spent so much time parodying TV shows is something a few critics have pointed to as a weak spot). Wanting some qualitative data to back that up, I rewatched it and scored each sketch. Making fun of Quebecor TV shows got a +1, Radio-Canada shows (or the hosts themselves) got a -1, and I adjusted those based on how deep the digs were.

The segments, in chronological order:

The net total: +7. Seven segments made direct jokes at the expense of Quebecor shows or personalities (as opposed to simply using parodies of shows as a conduit to make jokes at other people’s expense), and the only ones at Radio-Canada’s expense were one making fun of Joël Legendre (and that’s not even really a Radio-Canada thing) and the stuff about Les Enfants de la télé, the show produced by Cloutier and Morissette that would have been really weird if they didn’t parody.

Coudé-Lord suggests EDLT was included just so that they could go after TVA shows. I doubt they thought about it so clinically, and they made jokes at the expense of V as well, but I find it difficult to believe they couldn’t take some good shots at a single other Radio-Canada program. Tout le monde en parle? C’est juste de la TV? Le club des ex? Or is it that Radio-Canada hasn’t put anything new that’s really good or interesting on TV other than that archive clip show?

I’ll leave the judgment up to you, not that it really matters. Who keeps a scorecard watching a comedy show?

As a quantitative measure of its power, we can look at Bye-Bye’s ratings, though those might come with an asterisk because they only include live viewers and not those who watched from PVRs or online.

According to Therrien, the Bye-Bye had 2.315 million viewers on New Year’s Eve, and another 1.33 million when it was repeated the next day. Though the numbers were less than they were in 2008, Dumas points out that 82% of Quebec francophone TV viewers that night were tuned to Radio-Canada.

Until TVA puts serious effort into some late New Year’s Eve show (it didn’t even try competing this year), Bye-Bye will have a nearly unanimous audience. This year won’t change that.

Credit where it’s due

The jokes might not have been the best in the world, but everyone loved the production values. Sadly, the list of people involved with the show on its website is incomplete. The show that aired included names of people who did prosthetics (Stéphane Tessier), costumes (Diane Lavoie, Sylvie Beaudoin, Marie-Lynn Beaulieu, Véronique Leblond), original music (Nicholas Savard-L’Herbier), makeup (Bruno Rhéaume and Olivier Xavier, with chief makeup artist Charlotte Vézina), hair (Manon Côté and Stéphanie Tremblay, with chief Louis Bond, stylist Catherine Demers and perruquière Géraldine Courchesne). It also properly credits Pierre-Luc Gosselin, who directed the music videos.

Eagle-eyed viewers also caught the name of Pierre-Luc Cloutier, credited as “recherchiste” – who got to know Véronique Cloutier as a member of Dans ma télé, a group that recently disbanded after Cloutier decided he didn’t have enough free time to devote to such a volunteer measure. 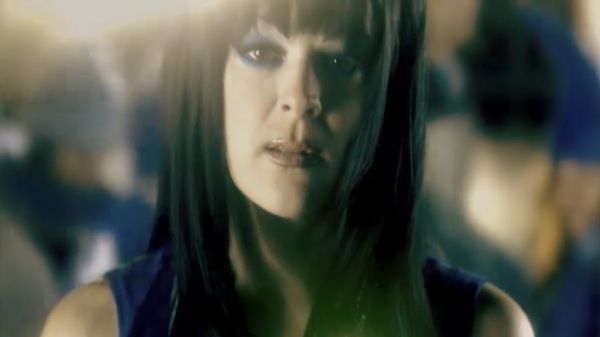 Find this parody of Marie-Mai's C'est moi - 5 minutes of scanning on Tou.tv or 5 seconds of searching on YouTube

You’d think that a show based almost entirely of individual clips would be put online in such a way that those clips would be individually accessible. Unfortunately, both the version on their website and the one on Tou.tv only offer it as one hour-and-a-half block with no table of contents.

The result is that if I’m looking, say, for that Véronique-Cloutier-as-Lady-Gaga parody everyone was talking about, I have to go to a bootleg version on YouTube. It has 19,000 views, which is 19,000 eyeballs that Radio-Canada or its Tou.tv website could have tried to sell advertising for.

Tou.tv is nice, but it’s not enough to throw an hour and a half of video online and break it up at the commercials. Online video is about searching and sharing. It’s about embedding into Facebook posts so people can share and comment.

Of all the things about this Bye-Bye, that ignorance of how online video works socially is what disappointed me the most.

UPDATE (Jan. 19): Le Soleil’s Richard Therrien says people’s memories are fuzzy when they say that this year’s Bye-Bye was particularly mean toward politicians.

3 thoughts on “The ho-hum Bye-Bye”