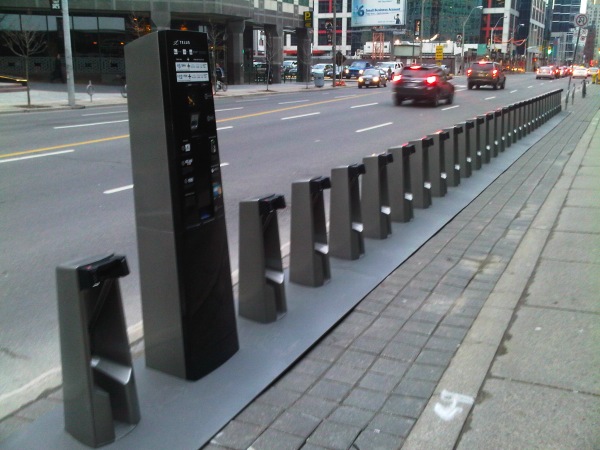 Fagstein reader Kenny D sent in this photo from Toronto, which is the latest city to be assimilated into the Bixi empire.

The official launch is Tuesday, May 3, with an official “first ride”.

The rate is higher than in Montreal, at $95 a season or $40 a month, but that didn’t stop 1,000 people from already signing up. More details are at Bixi’s Toronto website, or the usual Toronto blogs.

I’ve just recently gotten a chance to regain my regular Bixi habits, lugging my helmet around with me wherever I go. It’s still a bit cold, but it’s nice to be able to spend some energy on a regular basis.

Not much has changed on the Montreal side this season, except that subscribers now get 45 minutes free per trip instead of 30, and there’s a new three-day rate of $12.

No word on whether either city will get a tandem Bixi similar to what was given to William and Kate.

8 thoughts on “Bixi in Toronto”