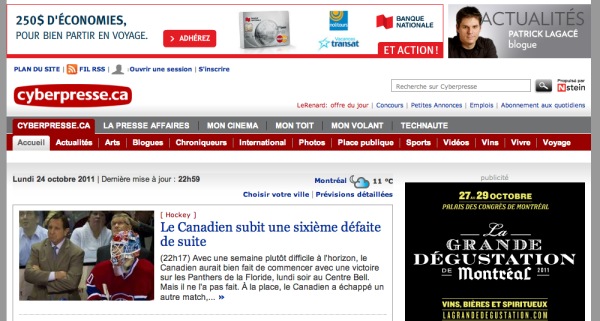 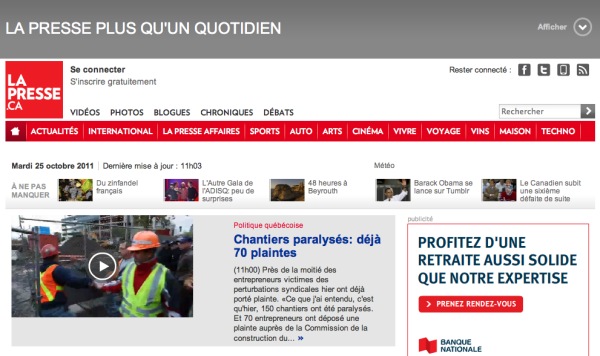 When I heard last night about how Cyberpresse.ca was being transformed into LaPresse.ca today, I started planning a post in my head, about how the last great example of the “portal” concept from a decade ago had finally fallen, following in the footsteps of Canada.com and Canoe.ca, who for years forced its papers and other brands to be mere sections of the portal instead of having their own websites with their own domain names.

But … that doesn’t seem to be what has happened here. At least not yet. Instead, they’ve changed the name and the branding (one that has existed for more than 10 years), but not the concept, and for now anyway all the Gesca newspapers still share the same online brand. 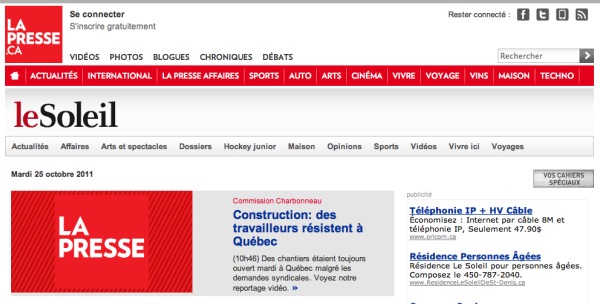 If I was a Le Soleil reader, I might feel insulted at the idea that my paper was nothing but a subsidiary of another. Imagine if the Montreal Gazette website was nationalpost.com/montreal, or if the Journal de Québec’s was journaldemontreal.com/quebec.

The same thing happens for other Gesca papers like Le Droit and La Tribune.

If Quebecers weren’t already convinced about the Montrealization of their media, this kind of shoves it in their faces, doesn’t it? (Le Soleil’s front page today lists its website as lesoleil.cyberpresse.ca, which makes me wonder: Were they even told of this change?)

(UPDATE: Briefs on the websites of Le Nouvelliste and La Tribune are notable in that their texts are identical. I guess the regional papers really are afterthoughts in the La Presse empire.)

I’m hoping that upgrades to the other papers’ websites will quickly follow, so we’ll see lapresse.ca for Montreal news, latribune.ca for news from Sherbrooke and lesoleil.ca for news from Quebec City.

That irritant aside, the Montreal paper is going all out in promoting the new look, which also includes redesigns of the paper and the website. There’s the TV ad above, and a two-page spread in today’s La Presse (PDF) explaining the changes. It’s clear from the amount of space devoted to web and mobile how much La Presse is betting on new forms of media.

As you can see, the feel of the paper hasn’t changed much apart from the logo (I’m sure some people will miss the oddly squarish-oval La Presse mark of old). The bigger change in print is the redesigned section fronts, which are given a more unified look, differentiated by name and colour. Headlines, columnist logos and other aspects of the layout are essentially unchanged.

Online, there are more changes, with the sections adopting the same names and colours as the paper. Notably, some sections that had been given their own names making them quasi-separate from the rest (Technaute, Mon Toit, Mon Cinéma) have been brought back into the fold and made sections of the main site.

But again, the biggest change is the name, and the most work seems to have gone into rebranding everything from their mobile applications to their Twitter accounts.

14 thoughts on “The death of Cyberpresse”