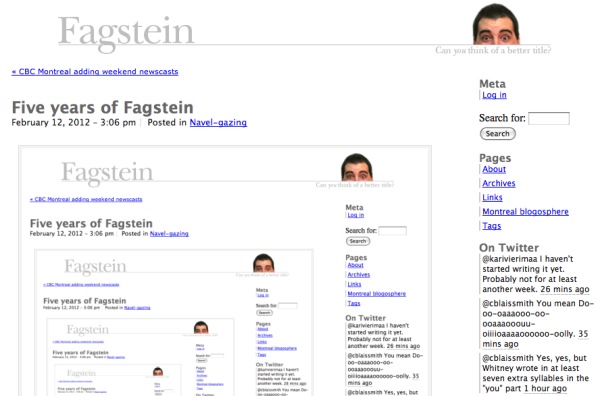 It was just after midnight, five years ago today, that during a period of extended unemployment I published my first post on a website I had just set up to share random thoughts with the world.

Looking back at some old posts, I realize how little idea I had of what it would turn into down the road. Many of the posts are short, sarcastic comments about news stories, about all sorts of topics I knew little about. There’s no effort to really think too hard about what I’m writing, and the idea of actually calling up someone for comment would have seemed ridiculous at the time. Often I’ll go back to stuff written around that time and cringe a little bit, either because I was far too fast on the trigger or because my opinions were sorely lacking in nuance.

There are more subtle changes that have happened since then. The headlines at first made no attempt at search-engine optimization, and didn’t use tags. (This isn’t just a question of getting Google traffic, but making it easier to find old posts about a topic as well, which I do often to add context.) There were also far few pictures used back then. (It’s a lot easier now, in part because of the thousands of photos in my database I can use as file art.)

As the months and years went on, I started to focus on things that really interested me, that I could write more than a paragraph or two about. That turned out to mainly be media, but to a lesser extent Montreal urban life, public transit and other issues as well.

As a result, I’ve been branded some sort of expert on local media. I’ve slowly started developing contacts, actually going out and reporting on things, and even breaking stories (and learning hard lessons about how to separate rumour from fact). Whereas five years ago I would have easily passed incognito in an open house at a local TV or radio station, I’m now on a first-name basis with many of the players in local English media and am the go-to person for TV and radio coverage in The Gazette that Bill Brownstein and Brendan Kelly aren’t interested in writing.

Probably the biggest change to this blog came about when I started posting on Twitter. Those short one-sentence posts got replaced by tweets. The result was that the average post got longer, and the frequency of blog posts dropped from about three a day to about three a week. (Going back to work for The Gazette also cut down on the amount of time I could spend on blogging.)

And, of course, there are a lot more comments on posts now, and despite the trolls, the xenophobes, the stubborn radicals who are closed off to reason, the personal attacks, the off-topic comments and the hundreds of spam comments I have to flush out every day, discussion in comments is among my favourite parts of this blog.

I really don’t have any big plans for the future. I’ve had a few people inquire about advertising, but I’ve stupidly turned them down so far, being more than happy with the money I’m making from my job at The Gazette. As it stands, I’m planning to just continue, using this forum as an outlet for things I feel need to be said out loud, and for news that’s of interest to people who have the same interests as me.

Thanks for reading, commenting, linking, supporting, contributing ideas and everything else you’ve done to make this the one-time second-most-popular local English-language blog in the city. I appreciate it.

17 thoughts on “Five years of Fagstein”