It’s been a year since KKIC (Kahnawake Keeps It Country) went from being a pirate radio broadcaster to a properly licensed radio station (CKKI-FM 89.9), from someone’s fun project into a serious commercial enterprise. But not much has been heard from the low-powered commercial country music station since then. Its programming has been mostly automated, and it hasn’t done much marketing to get the word out about what it offers.

That changes this week as the station launches new morning and afternoon drive programs and makes more of an effort to market itself through social media. 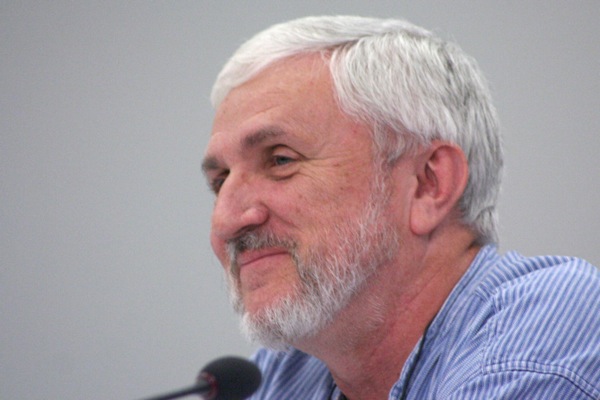 Sheldon Harvey is a co-host, with owner Brian Moon, of the KKIC morning show

The most surprising news is one of the station’s new faces. Sheldon Harvey, a local radio expert, moderator of the Radio in Montreal discussion group and co-host of the International Radio Report on CKUT, joins station owner Brian Moon as hosts of The Country Breakfast Show with Brian and Sheldon, from 6am to 9am on weekdays. Harvey has been hired by the station as a consultant and has been working to give it a marketing push over the past few weeks.

“It’s not going to be any super-slick produced affair; just a easy, laid-back approach, with casual conversation, basic information and the usual mix of today’s country hits and country classics,” Harvey writes in an email. “It’s really going to be a ‘work in progress’ as we feel our way around. We hope that listeners will give us a try and come along for the ride.”

“We do want to reach out to the listening audience and have them feel like a part of the station. We also want country music fans everywhere within the reach of our signal that this station is for them. There is a bit of misconception that this a community station for Kahnawake. KKIC is really for everyone. While there is an obvious connection to Kahnawake, KKIC is proud to be offering country music to fans of country music. Country is the most popular radio format in North America. Now Montreal and the surrounding regions have their own 24 hour a day country music station on 89.9 MHz and live-streaming on www.kkicradio.com”

Harvey, who lives on the south shore, has a history with Kahnawake. He also worked for the other FM radio station there, CKRK-FM (K103), which is the community station serving the reserve. He emphasizes that, unlike K103, KKIC is a commercial station, and it wants everyone to feel welcome.

Montreal has been described as the largest market in North America without a country music station. Whether that’s true depends on your definition. There’s CJMS 1040 in Saint-Constant, which bills itself as a country station, but doesn’t have country music full-time. There’s also WVNV 96.5FM, a border station that targets Montreal.

“We really believe that there is potential for a country music station, particularly an English one,” Harvey writes. “Given the several dozen country music festivals held in Quebec each summer, including the immense St-Tite festival, we know that there are lots of country music fans in the Francophone community.  We know that they don’t want to listen to French country music, so once they know about KKIC, we hope we can bring them over.”

Aside from marketing and programming, which are mainly a question of money, the big issue for KKIC is its signal. Its license is for a transmitter with a maximum effective radiated power of 610 watts, on top of a small tower in a backyard. Its signal technically covers the reserve and surrounding areas, including the southern half of the West Island. But its signal is actually pretty good in other places, and can be easily heard farther away.

Whether this push will be enough to put 89.9 on people’s dials and turn KKIC into a profitable enterprise remains to be seen. Running a radio station most people have never heard of isn’t easy, and Harvey admits that selling advertising is a challenge.

But at least they’re trying.

The Country Breakfast Show with Brian and Sheldon airs 6am to 9am on weekdays. Cedrick’s Kickin’ Country Drive with Cedrick Periard airs 3pm to 6pm weekdays. The station also has a Facebook page and a Twitter account, and can be streamed live at kkicradio.com (which is in desperate need of a makeover).

5 thoughts on “KKIC gives itself a big push”