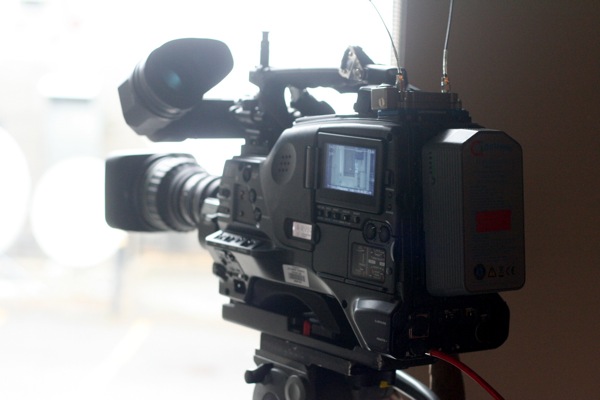 One of the HD field cameras being used by CTV Montreal cameramen.

After what has seemed like eons since its competitors made the switch, CTV Montreal has announced that it’s making its final push toward launching a high-definition broadcast, which should begin in the spring or early summer. But it’s not all good news – technological change will mean a slight reduction in the number of technical staff at the station, management and its union have confirmed.

The station issued an update via its Facebook page last week, explaining that it had just put new HD studio cameras in place (viewers might notice a slight difference in colours or crispness in the studio shots during newscasts), and is building a new control room that will be HD-capable.

Other steps toward the conversion had already been taken earlier. New field cameras have been acquired, new editing suites installed, an upgrade to digital storage completed, and a new studio has been constructed that has the proper wiring and the level of detail necessary to work right in HD.

CBC and Global made the upgrade a long time ago. Both first moved to a 16:9 upconverted SD system, which masked the fact that they weren’t yet HD. CTV did not make a similar move due to a company policy that HD not be faked like that. CBC Montreal went through an upgrade that cost around $1 million that made it the first English CBC station in Canada to be fully in HD. Global’s conversion was a lot easier because it doesn’t have a control room – Global Montreal’s newscast is directed and controlled from Edmonton, leaving only the field cameras, studio cameras, edit suites and high-speed data connections to upgrade. 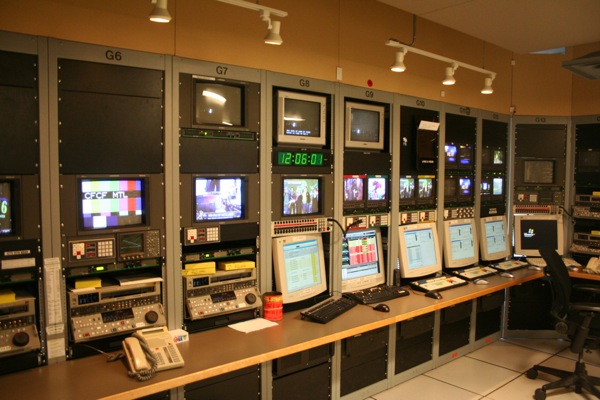 The “Feed and Play” room at CTV Montreal is getting an upgrade as HD equipment is installed, replacing all this now-antiquated stuff.

The trickiest part of the upgrade is that they can’t shut everything down while they do it. So a new control room must be built while the old one is still in operation. A secondary control room called Feed and Play, which handles incoming feeds, also must be upgraded while still running.

So far, the plan is to finish the upgrade by March, but CTV Montreal general manager Louis Douville said “we’re not committing to a date yet.” The launch of HD could happen in the spring, or maybe June, depending on how things go. The two control rooms will mean that the station can deal with any kinks or delays that might creep up before they make the launch.

(CTV Montreal had a similar problem while it was constructing its new studio in the summer of 2011 at the same time as RDS was constructing new studios in its former space. From July to September, the newscasts were done from a small desk installed in the newsroom, which only had room for one anchor.)

Viewers have been complaining that the newscast isn’t HD for a while now. “There was certainly a demand from our viewers,” Douville said. Though I’m guessing many care more about the 16:9 aspect ratio than the actual resolution of the picture.

I’m assured by plenty of people at CFCF that patience will be rewarded when the HD newscast goes live. The lighting and design of the studio were done with HD in mind, and nothing in this building is done half-assed on a technical level.

The last step toward an HD upgrade is remote trucks. CTV Montreal has two of them, and Douville says at least one will be upgraded to HD (the other will depend on budget).

While the control room is being upgraded, the station will be installing a new automated production control system, OverDrive by Ross Video. The software system will allow much of the control room operation to be automated, which means there will be need for fewer staff. CTV Montreal is one of the few TV stations in Canada not to move to such a system yet.

Currently, jobs in the control room include the director (who barks orders on what to do), the technical director (who actually pushes the buttons), the production assistant (who handles timing and cues live on-air staff), and a graphics person who uses a system called Inscriber to prepare and cue on-screen graphics. With OverDrive, these four jobs would be merged into one or two.

In fact, they could eliminate more positions with this system. But CTV has decided to keep an audio technician as well as a studio robotic camera operator.

“We’re still working out the details on what the final model is going to look like,” Douville said.

The change might lead to some job losses once the transition is complete, which probably won’t be until summer. Management informed the union last week that it expects to cut the number of technical staff at the station. Douville said it was “in the neighbourhood of four – five at most.”

Doug Kelly, a technical director and president of the union local representing CTV Montreal employees, said they were told there would be a reduction of 3.8 jobs, but details are still to be worked out. Employees have been informed that their jobs would be affected (including Kelly’s), but layoff notices have not gone out. Union rules here allow for employees to train for other jobs they might be suited to, so those whose positions are eliminated might find work in other functions. (It’s unclear at this point whether new control room jobs could be filled with employees who did other jobs under the current system, or if new people would need to be hired to work the automated control room.)

“Some people would be in a position where they can take early retirement,” Kelly said, and could perhaps be convinced to leave voluntarily with a buyout, though he added that it’s too early to gauge firm interest of his members.

Both Kelly and Douville agree that this is a small number of jobs being affected. CTV Montreal has more than 100 technical staff, including control room technicians, cameramen and editors.

Kelly did express worry that the reduction of humans in the control room could have an impact on quality. “There are certain things that will be difficult for one person to coordinate,” he said. “But the company’s working very hard so it doesn’t show on air.”

Before you start speculating, the kind of automation being installed here isn’t going to do with CTV Montreal what was done with Global Montreal – outsourcing the production of local programming to another city. CTV is investing far too much money upgrading its facilities here to not make use of them.

Still, for a small number of CTV Montreal employees, the technological changes happening at their station could be cause for more worry than excitement.