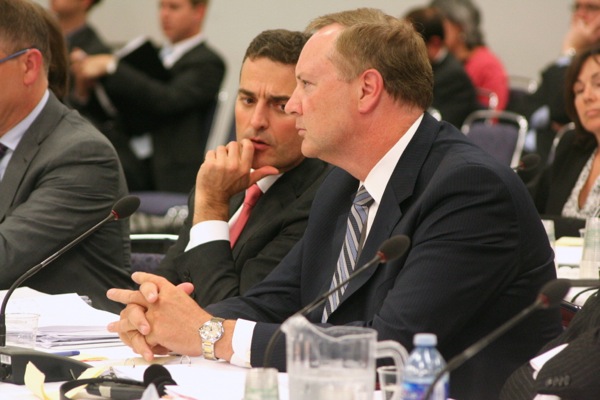 In case you have been living under a rock for the past week, the CRTC finally released Bell’s revised application to buy Astral Media. If you want to read it all, you can download it in a .zip file here. But beware, it’s 73 documents, and many of them are long (the Supplementary Brief, in which Bell makes its case, is 63 pages, plus an eight-page summary plus a two-page table of contents).

So what’s different this time around? Well, a lot. As we already knew from the Competition Bureau, Bell will sell some of Astral’s TV channels in order to get it down to about 35% of English Canadian TV viewing and about the same amount of revenue from French-language TV as Quebecor.

And as we knew from the point when they announced the revised deal in November, Bell will ask the CRTC for a special exception from its competition rules in order to allow it to continue to own TSN Radio 690 while buying the three English-language Astral stations.

I’ve compiled, in point form, Bell’s revised proposal for this story, which appears in Wednesday’s Gazette.

For people in the industry, particularly TV content producers, the big changes come in the “tangible benefits” package. This is a tax that the CRTC puts on acquisitions (10% for TV, 6% for radio) that is supposed to go to funds and projects that benefit the broadcasting system as a whole. On the radio side, it’s usually in the form of funds for emerging Canadian artists, or help with promoting them. On the TV side, most of it is supposed to go to projects that will show up on screen. In all cases, these should be things that the broadcaster would not otherwise be doing to satisfy its licence or stay competitive.

Bell’s original proposal came under intense fire because it was deemed self-serving. In particular, a plan to spend $40 million to upgrade the network of its own subsidiary Northwestel was heavily criticized, especially as Canada’s north is just now being opened up to competition in telecom, and because the CRTC had already required Northwestel to make upgrades. Other proposals, including funding for the Bell Let’s Talk campaign for mental health, and a surprise proposal to spend $20 million to launch a French-language all-news channel, were also slammed by competitors.

None of this is in the new proposal. As I outline in this sidebar to the Gazette story, the new Bell proposal is much more traditional, promising new money for the production and promotion of Canadian television programs and films. It even adds some money to help consumers, which makes me wonder what happens if that money is used in a way that makes Bell look bad.

The overall envelope for tangible benefits is lower than what Bell proposed last fall, because Bell would be selling off a significant chunk of Astral’s broadcasting assets (about a quarter by value). And while Bell came to the CRTC hearing and significantly raised its promise above the minimum required last time, so far this time it’s sticking to the standard amounts, albeit with some intangible benefits thrown in.

As I say at the end of the first story, there are some things missing from the application too, especially considering the CRTC’s decision that denied the first application.

For one thing, though the CRTC seemed to clearly take issue with the way Bell chose what radio stations to sell, the list of stations being sold hasn’t changed.

“The decision to include certain Bell Media radio stations in the divestiture plan can be viewed as an attempt by BCE to trade underperforming stations for successful ones, which would not provide a benefit to the Canadian broadcasting system or create the conditions for healthy competition,” the CRTC wrote in its decision. “Selling less profitable stations could reinforce BCE’s position in these markets, make the entrance of new competitors more difficult and reduce the total tangible benefits paid on Astral’s radio stations.”

The new proposal also doesn’t make any additional commitments toward local programming in television or radio, merely a commitment to keep local TV programming at current levels until 2016.

And, like the first time around, the proposal says nothing about journalistic independence between the news operations it will be acquiring and the ones it already owns. Bell doesn’t address this because it says it’s not acquiring any television news services from Astral. And while that’s true, it ignores the fact that Bell is acquiring radio news services from Astral. In Montreal, Toronto and London, Ont., Bell will be acquiring news-talk radio stations in markets where it owns a television station producing local news. You only have to look at Ottawa’s CFRA airing audio of CTV News broadcasts to see the potential for loss of journalistic independence.

Plenty has been written about Bell and Astral this week. Here are some stories worth a read:

Bell’s application to the CRTC to buy Astral Media will be heard at a hearing starting May 6 in Montreal at the Hôtel Gouverneur Place Dupuis, 1415 St-Hubert St. Comments from the public must be submitted by 8pm on April 5. They can be submitted here (Choose Option 1, and then the first application, No. 2013-0244-7).

7 thoughts on “Bell/Astral Take 2: The Proposal”