Those words were uttered by TVA’s Pierre Bruneau on election night in 2007, after Radio-Canada had earlier incorrectly projected that Liberal leader Jean Charest had lost his seat in the election that swept the Action démocratique du Québec to official opposition status and ended the political career of André Boisclair. TVA held off on calling the race for that seat, and reaped the benefits.

The TV networks make big deals of their “decision desk” teams, the computers, political analysts and experts who wait until they’re absolutely sure that a race can be called before making a decision. That care is counteracted by the race to be the first to declare the result of the election.

But surely the chance of being embarrassed, as Radio-Canada’s Bernard Derome was in 2007, by calling even a single seat wrong would be enough to ensure that they always get it right.

On Monday night, all three local English TV stations with elections specials made more than one incorrect call. And, to their shame, I caught them on my PVR. 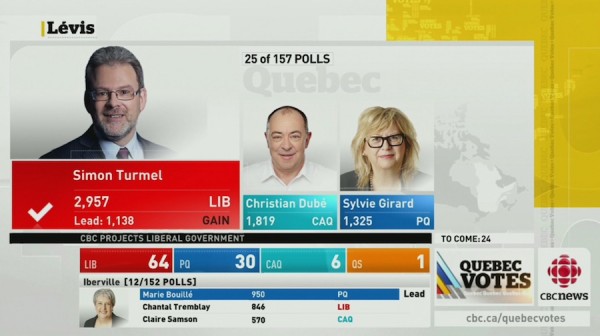 Simon Turmel was one of a few Liberals to steal seats away from the CAQ in the Quebec City region. Or at least that’s what CBC seemed to think, announcing the gain with Turmel sitting in a seemingly comfortable lead of more than 1,100 votes.

But not quite. When the night was over, the CAQ’s Christian Dubé won the riding by 1,943 votes. 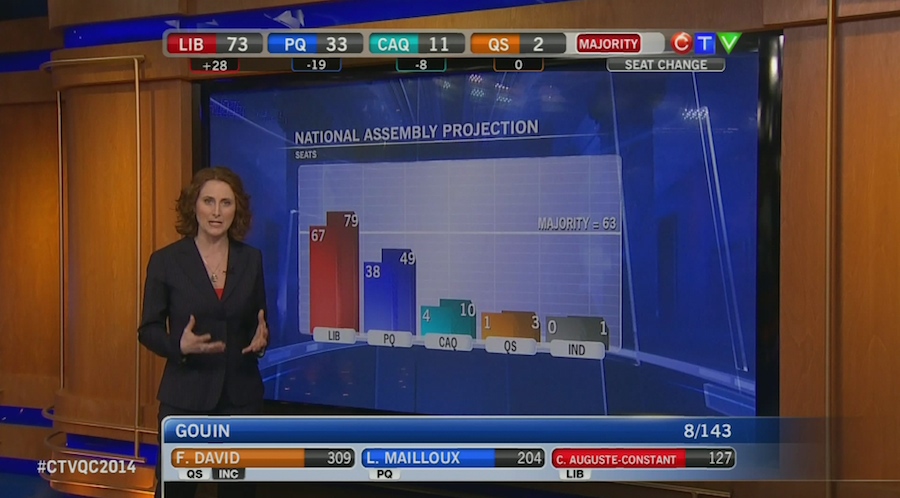 After calling a majority Liberal government, CTV’s Tarah Schwartz presents the network’s projection of seat ranges for the four parties. The Liberals would end up at 70 seats, well within the 67-79 range projected, and Québec solidaire would win three (two if the recount doesn’t go their way), also within the range. But the projection set a range for PQ seats between 38 and 49, well above the eventual 30 they would get. And the projection for CAQ seats was 4-10, when in fact the party won 22.

Even with the ranges of numbers, CTV was off by eight seats in one case and 12 in another. With only 125 total seats, that’s a big number to be off.

(Schwartz would also get her voice — but thankfully not her face — featured in a Jimmy Kimmel late-night show montage after accidentally referring to Mickey Rooney as Andy Rooney at the top of Monday’s noon newscast.) 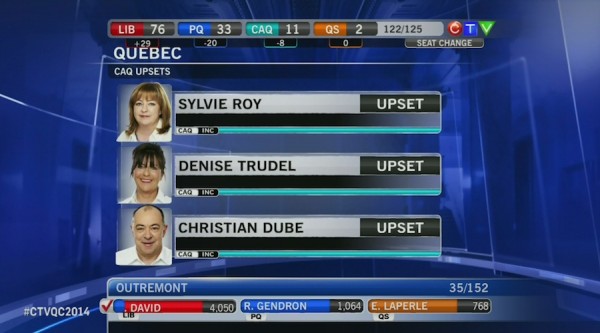 CAQ seat losses became such a story early in the night that CTV had graphics listing them. Unfortunately, they jumped the gun a bit. Two of the upsets listed here didn’t actually happen. In addition to Dubé, which CBC also got wrong, CTV gave Sylvie Roy a loss in Arthabaska. That’s particularly embarrassing because Roy ended up winning the seat by more than 6,000 votes. 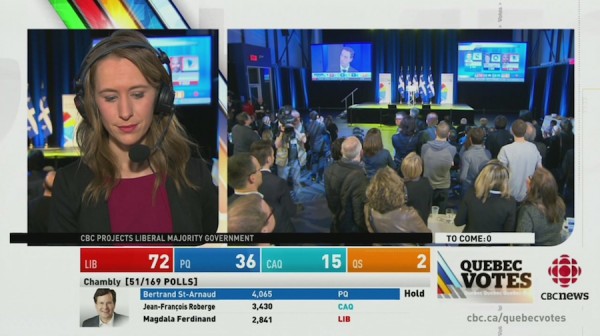 Chambly is a swing riding, but I guess CBC/Radio-Canada was confident enough with 51 of 169 polls reporting and a 635-vote lead that it called the riding for incumbent PQ MNA Bertrand St-Arnaud, the justice minister.

Not such a great idea in the end. The CAQ candidate, Jean-François Roberge, won the seat by 408 votes. 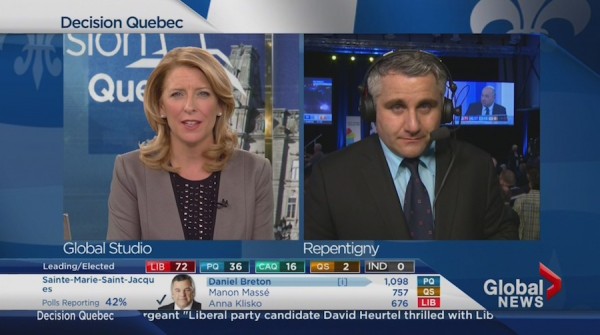 The PQ stronghold of Sainte-Marie-Saint-Jacques showed a 341-vote lead with almost half the polls reporting (at least, that’s what the graphic said), so apparently that was good enough to put a checkmark next to PQ incumbent Daniel Breton. But this ended up being one of the closest races of the night, and in fact is heading to a recount.

That could mean Global ends up right in the end. Oh wait, no it won’t. Because Breton ended up third in the riding after the counting was done. Manon Massé of Québec solidaire came up first in preliminary results with a 91-vote lead over Liberal Anna Klisko, who requested the recount. With Breton behind by 825 votes, a win for him seems unlikely. 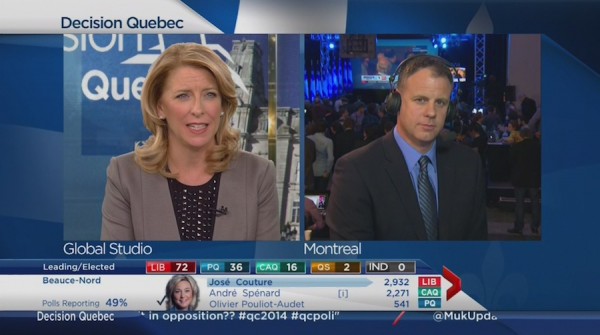 Another incorrect call of a CAQ incumbent losing in central Quebec. Despite the 661-vote lead here for Liberal José Couture, the CAQ’s André Spénard kept the seat easily, winning more than half the votes in the riding and beating Couture by 4,226.

Besides the bad calls, there were other questionable statements made on air. Early in the night, various analysts seemed to take it for granted that the CAQ would lose seats. In fact, the party won three more seats this time around than it had won in 2012. There were also statements made that Québec solidaire would be limited to two seats and that Pauline Marois’s seat in Charlevois-Côte-de-Beaupré was a safe win.

And there were the technical issues. Graphics that were slow to load, or reporters in the field suffering communication problems. The most amusing was an apparent computer error at Global that showed every seat in an exact three-way tie for a few minutes.

I didn’t catch any of Sun News’s election special, and I didn’t hear any chatter about TVA calling any races wrong. If you spotted any other errors by TV or other media, though, let me know.

I didn’t catch all of the election night coverage due to technical limitations, so I may have missed Global and/or CTV correcting their bad calls. I did catch CBC’s Debra Arbec, at 10:42pm, saying that they had gotten the calls on Lévis and Chambly wrong. 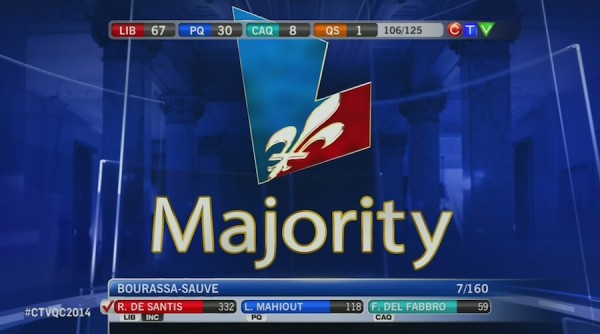 For the record, CTV was the winner, in calling both the Liberal win (at 8:18pm) and the majority (8:36pm). The French networks followed shortly afterward. 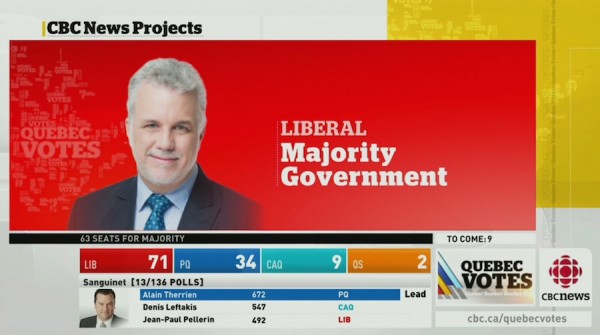 CBC made the call for a Liberal government at 8:25pm, and the majority at 8:42, both shortly after CTV. 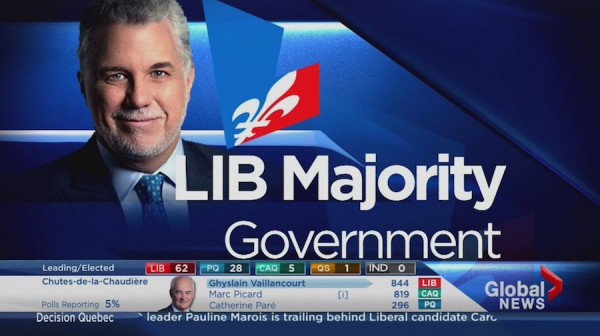 At Global, the election special started with an online stream at 8pm, and only went on the air at 9. The call for a Liberal government apparently happened around 8:30, and the majority call went out within seconds of Jamie Orchard going on air.

Who didn’t get it wrong: The pollsters

When the polls showed the Liberals headed to a majority, and in the last few days a surge in support for the CAQ, many people doubted it. PQ members and supporters said the polls were out to lunch, and after failing to predict provincial elections in Alberta and B.C., it’s understandable that many were skeptical.

But the polls were dead on this time, at least in terms of vote share. For the four main parties, the actual result came within two percentage points of the aggregated poll averages for each of the parties. The two main aggregators, ThreeHundredEight.com and Too Close To Call, have post-mortems showing they got more than 100 ridings correct, but missed close races.

The projections got the CAQ and PQ seat totals wrong. Partly it was because the PQ’s vote total was slightly lower than projected. But mostly, the two aggregators agree, it was because the CAQ won an unusually large amount of close races in the 450 area around Montreal. Instead of the close races averaging out for the three parties, the CAQ won most of them, causing them to come out of the night with 10 more seats than the seat projection model predicted.

It’s not that the polls were wrong (the pollsters don’t make seat projections), it’s that the model that turns poll results into seat counts failed to account for an undue amount of narrow CAQ wins. It’s why seat projections based on polls are never really going to be reliable under our current electoral system.

The calls aside, how did the networks do?

Pretty well, considering how chaotic election nights normally are. Each of the three networks had analysts in studio, reporters out in the field, and fancy graphics showing the results. 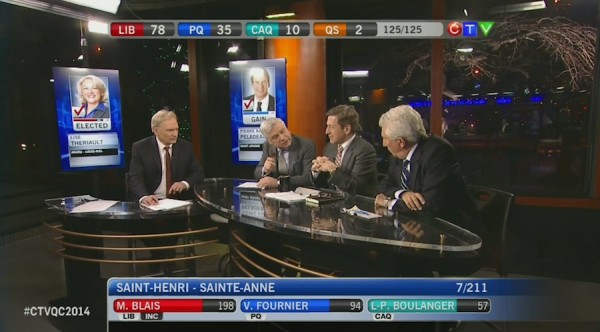 CTV put two desks to work in its studio. The second featured an analysis panel moderated by Barry Wilson, with Westmount mayor Peter Trent, Just for Laughs festival organizer Andy Nulman and former Bloc leader Gilles Duceppe (who you think would have been in more demand on the French side). It had more analysts, and more reporters, than the competition, but its graphics looked pretty simplistic compared to the others. 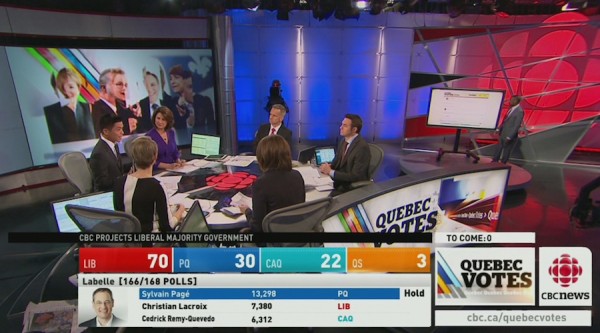 CBC moved into the Maison Radio-Canada’s Studio 47 for the election special, giving them plenty of room. The in-studio team was more focused on results than analysis, with two anchors, two reporters (Nancy Wood and Catherine Cullen) and two analysts. It also had reporter Sean Henry with the social media big board.

CBC’s graphics were nice-looking, through the animations were too much. Bringing up a board prompted an annoying and completely unnecessary beeping sound. And the animations took too long to show results. The animation for the results coming up at the bottom of the screen took three seconds, which is three seconds when nobody can see information. Next time, make it quick, and silent. 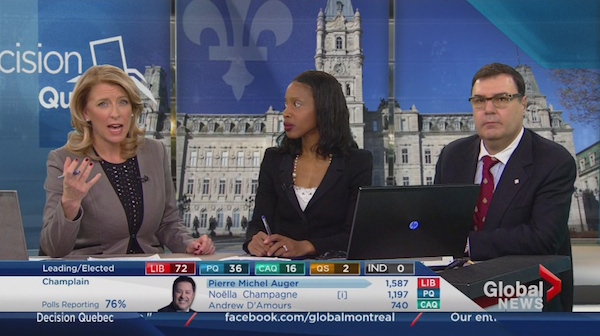 At Global, I’m once again stuck trying to decide if I should put them on the same level as the competition or give them extra credit for doing so much with so few resources.

Provincial elections are particularly hard on Global, because it has to spend so much covering them, but the campaigns have no interest in advertising in English, so they don’t get the extra revenue.

The election special went from 9pm to midnight, which is more than they’ve done in the past. And they managed to get reporters to the party headquarters to report live, which is no easy task.

In studio, they had anchor Jamie Orchard with former Liberal MNA Yolande James and political professor Bruce Hicks doing analysis. Outside in the newsroom, Elysia Bryan-Baynes was following social media, with lefty activist Ethan Cox providing a few snippets of insight on cue. 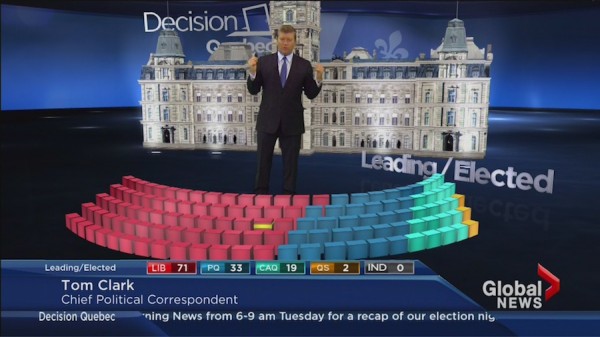 Global also wins the CNN Award for most unnecessarily extravagant election-night graphic, having Tom Clark in front of a green screen showing the breakdown of seats.

For reviews of the French networks, I’ll point you to stories from La Presse’s Hugo Dumas and Le Soleil’s Richard Therrien. TVA won the night, ratings-wise. We don’t know who got the largest audience on the English side (but can probably assume CTV) because anglo TV ratings here aren’t measured electronically yet. That will change this fall.

City, because it doesn’t have a news department, didn’t have an election special, or anything online either. Reporter Laura Casella did report on the election, but for City Toronto’s local newscast.

I’ll leave it to you to decide if City Montreal should have done more than have day-after analysis (featuring videos ripped from TVA’s broadcast).

6 thoughts on “Election night projections the networks got wrong”